I adore openhousenewyork weekend. Last year, it was a Vertical Tour of St. John the Divine. This year I opted for a tour of the Trinity Church Bell Tower. For someone whose time at religious services is limited to weddings and funerals, I am fascinated by church architecture and could easily make a weekend of the church sites. ETA: I’m not the only one. I may need to think of that for 2014.

I got down to Trinity early (OK, on time, but that’s early in NYC weekend time) and had some time to explore the churchyard, including Trinity Root, which I’d only previously seen through the fence. (Yes, as was the case with St. John’s last year, I had no idea Trinity was generally open and operational.) The story behind the sculpture is a fascinating read and for a time until it was installed, the stump was on display in the Trinity Churchyard. I’m not sure how much of this article is true, but the survival of St. Paul’s in some ways mirrors the survival of NYC after 9/11. When I read My Manhattan, I first learned of the connection between Trinity and St. Paul’s, but the more I read, the more of its history St. Paul shares. That’s a living landmark that can never be lost.

Anyway, derail aside… Trinity Church is amazing in its own right. I was glad that last year’s scaffolding is gone and that the work, which included a cleaning, left the church cleaner than it has been in years. I really didn’t know much about church bells, but I was curious. Yep, curiosity, my main openhousenewyork driver. We were welcomed by David Grider, the principal architect behind the restoration of the belfry in 2007 before climbing (and I do mean climbing including a ship ladder and spiral stairs!) up to the ringing room for an explanation of the bells, ringing and some history. The shutter bug in me, however, was distracted. 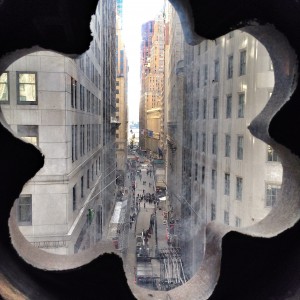 While this tour didn’t feature the views that the St. John’s Vertical Tour did, this unexpected view east down Wall Street was amazing and awe inspiring. It’s the reason I decided to explore down that way later in the afternoon.

After the ringers explained the basics of ringing to us, they let us hear the bells in action. I’m not sure what I expected, but I didn’t expect it to be such an aerobic workout or one that featured people from all ages. The Trinity Church Ringers are lucky in that many international ringers come there to ring due to the legacy of the church and its bells. Here‘s a decent overview for those similarly confused with a focus on the how and why (PDF) behind “change ringing” and some amazing behind the scenes photos from one of the church’s ringers. Church Ringers, the ultimate Odd Job? Although I was somewhat surprised to learn that the ringers pay to  ring (PDF), but don’t appear to be paid by Trinity.

Our tour and lesson over, we descended to the sanctuary and I spent another hour or so exploring the sanctuary and churchyard. The cemetery there is only one of the three that Trinity has, but I found this one to be the most historic and “home” to the most interesting people. Although Alexander Hamilton is not currently on view, many others old and new are.

Unsurprisingly, I found the churchyard peaceful before heading east into the chaos that was Wall Street.

One thought on “openhousenewyork: Trinity Church”