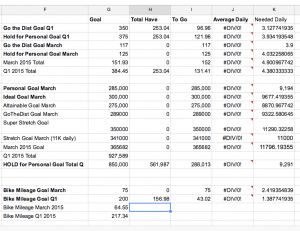 I need to put down the spreadsheet and walk away

I’m most proud of myself for keeping up the bike mileage. My re-commitment to the gym is showing in the scale and I will hopefully win month one of the Transformer DietBet after winning the Kickstarter. Baby steps.

I remembered that March 2015 was good because I had an insane streak of hitting goal, I didn’t remember that it was even better than May 2015. That means the streak of topping the month the prior year is going to end. Instead, my goal is to top Q1 2015. And that is why my spreadsheet exploded.

I’m not too worried about the mileage. As I mentioned in December, the stride/miles calculation is still off but I’m going to shoot for it. So my March goals:

I’m shooting higher for the bike. I want to see if I can do 75 again.

More TK on books and DietBet. Oh and money because the grocery expenditures is another time to step away from the spreadsheet