Whooah, we’re half way there…Take my hand and we’ll make it, I swear…Livin’ on a prayer

It seems like just yesterday I was setting my 2017 goals and now we’re at the year’s halfway mark. I thought I had a set mileage goal, but I had a 3.8m step goal (with 4m as stretch and 500 mile bike goal. I also had a goal of a 400K month and less than 93 days below goal. About those goals…

To be fair, those goals were before I went on a run quest and before Caryn turned me on to RunTheYear. When I joined I figured I had no shot of covering the mileage on my own but knew Caryn and I could do it together. Team #PinstripeBelles soon grew to four with folks from the Facebook group looking for a team and as of today we’re at 1975.88 miles. wooHOO!

I’ve fallen off tracking the days below goal, so here’s a quick look. I also upped my daily goal from the default 10K to 11K and am seriously considering upping it to 12K given some ridiculous averages:

I got a bee in my bonnet this week about topping May 2017 after topping June 2016. Why? Those were months where my totals were higher than normal (although I later realized May 2017 wasn’t actually that good) due to the Saunter and the Manhattan Bridge Walk. I pushed hard and on Friday realized I was on the cusp of what I thought was my best Workweek Hustle and pushed for 80K. I got it, with 33 steps to spare, but turned out it wasn’t my best week. I assume that was April’s ridiculousness and I just didn’t notice weekly total.

So… plans for the year:

My June running goals came close to my previous high of April and I still think 50 might be doable. I’m impressed that I got to 40+ with the early injuries, but the races helped. I don’t have any booked for July due to the heat but I’m watching the weather and contemplating the: Governors Island 10K, the Damon Runyon 5K (on the warning track at Yankee stadium!), the NYRR R-U-N 5K as I’d love a proper 5K within Central Park and maybe the Ice Cream social.

Further, I’m keeping my time/pace goals at 30 minutes and 13 minutes although I came in at 35:28 average time at 12;46 pace. Why? Because they’re both off. There are a few where I tracked the mileage but not the time or the pace as I knew they’d skew it.  Time wise, that was especially true when I was healing after the Retro 5Miler and going for the MyMile and pace with yesterday’s beach “run” aka game of people and sand castle dodg’em. As I look back on my spreadsheet, I realize if I’d taken the time hit for the first MyMile, the 11:50 pace would have countered the 13s later in the month. Lesson learned, be honest in tracking. I think 30m is a good challenge too as unless I’m going for a 5K or doing a race, I tend to go shorter.

I didn’t particularly think I was getting faster but one day this week I didn’t have the time or energy to do a proper 2+ mile run so I decided to have another go at MyMile after coming in at 11:50 on June 5.  When I shaved 14 seconds off that (5.0 for .65 miles, 5.5 for .35) I realized I am getting incrementally faster and decided to look back at other one mile-ish runs: 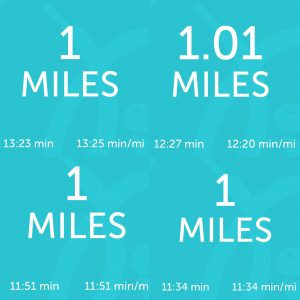 I’m almost two minutes/mile faster in two months. At some point I’ll figure out how to translate that to longer runs, but we’ll see. I’m still devouring Hal Higdon and just got his Run Fast which I’ll try to implement.

The first two are doable. The latter is a stretch but I think it’s a worthy goal to work toward even if I fall short. Yes, I’m back to the mileage goal even though I said it was broken. It is, but it’s still a ball park.

On to July… time to get off the couch. State of the books tomorrow