I (sort of) meant what I said when I didn’t care about yesterday’s time. I was more about the photos and the experience and in the humidity/with the stairs, walking was smart move. But it bothered me that the first mile was so slow when I was running.

Today I was having a typical slug day. I am so much more productive when I get up and run early, but I woke up and took my coffee to the couch and before I knew it, the Yankees were on. “I’ll just watch a few innings” gave way to 4 PM. Oops. I really wasn’t feeling a run so made a deal with myself, go out side. If I truly didn’t want to go to the gym and it was too hot to run outdoors, I’d at least walk to Target (about 2 miles). Whatever I did, ending the day with fewer than 1,000 steps wasn’t an option. Ahh, the external accountability of Fitbit challenges and my #GoTheDist spreadsheets.

When I got downstairs I realized it wasn’t nearly as hot & humid as weather app indicated and decided to head toward the East River. Carl Schurz Park, my original outdoor running nemesis and home to such illustrious times as a 15:23 minute mile in April when I was into the 13s and 14s. My comment on that run? ugh. Truly hate East River. Better than nothing though. (Have I mentioned lately how much I love my spreadsheet for progress?) It has since become somewhere I enjoy running due to the breezes off the East River and that it is, approximately, 400,000 times less crowded than Central Park.

I have two loops, ish that I’ve done: a two mile round trip to E. 96th and a 2.5 mile one that goes as far as the Wards Island Bridge. I still wasn’t sure how motivated I was so I decided to just go and see how I felt. To deal with my question about the 17 minute mile yesterday I decided to try and ignore the watch and just run at what felt right. A few times during the first mile I glanced at it and was pleased to see 12:30. That has become “my” pace** and it felt as if I were back on track. Even later I realized I’d dipped below 12. WOW. Guess it’s time to set my treadmill base to 5.0 instead of 4.8? 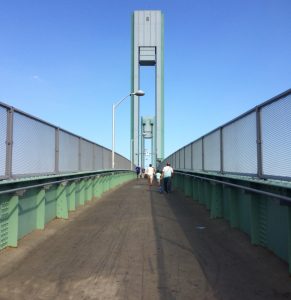 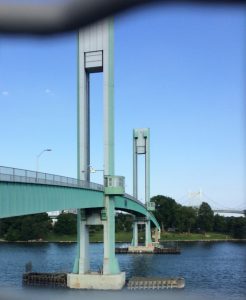 Somewhere around the approach to the Wards Island Bridge I remembered that yesterday’s run didn’t count for the Runkeeper Global 5K because it was untimed. I had a feeling that I could make this into a 5K with some wiggles. Did I want to go all the way to Target? Not particularly. What about Wards Island? Also not particularly. As I was mentally writing this blog post in the shower a line popped into my brain: too much up. I vaguely recall it as being something from Japan, but it also fit. Stairs yesterday, ramp today. I compromised with myself and decided I’d run to the bridge’s half way point so that it would be down all the way back. It’s a bike ramp so it folds back on itself three times. I ran the first two and then walked the third and drank some water. Oh, and took a photo 🙂

I headed back down, pleased to still be under 12 even with the walk bit and after a wiggle north for some mileage, headed back south. I wiggled where I could, onto the future ferry pier. I forgot about the uphill behind Gracie Mansion as I avoided it last time due to flooding. That was one moment where I was thinking 3.1 might not happen but I picked up some steam when it flattened out and zigged out to East End along 82nd for some mileage before going back to the fence where the walkway ends. I was still short so I doubled back and then all the way out to 83rd and East End where I hit 3.13 and stopped the watch.

Yes, 3.13, because sometimes Tom Tom/Strava/Runkeeper don’t pick up accurate data and I wanted to be sure it would count as a 5K. As I cooled down and tried to hit my daily fitbit goal with a walk to get water, I began to think that it might have been a PR. I couldn’t recall exactly what my July 1 time was (38:29), but I thought that with hanging out under 12 on average that I might have it. When I got home I synced TomTom with the app and.. 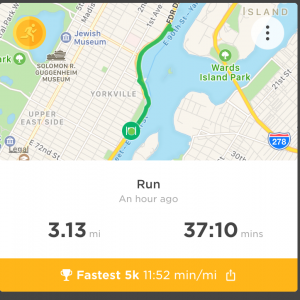 BAM! Runkeeper actually doesn’t pick up Tom Tom’s new Pause Detection and since that’s what I’ve used for everything, I waited to see what showed up there. 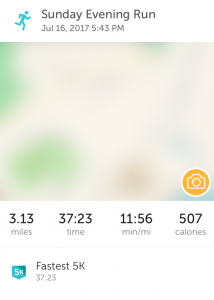 Over a minute faster in two weeks and a two week window where I didn’t run as much as I’d like due to travel. Much like run/walk, maybe there’s something to the less is more that Runner’s World frequently discusses. (Yes, aware that Runkeeper wildly overestimates calorie burn. I don’t generally eat them back). I’m probably not going to hit my monthly mileage goal, but I’m OK with that. It’s quality runs and I think every other day working better for me than daily did, though that works for some people.

This brought on a true runner’s high at the level I hadn’t seen since I first graduated from C25K. I’m still and forever a turtle, but I’m a faster turtle and I’m not alone.

** Speaking of pace, a return to my normal brought about this change. Yesterday’s 16:35 took my July average from 12:44 to 13:10. Today’s rebound (and where it got its name), brought it down to 13:02. I don’t like being above 13, but like I said, honest tracking. And I have two weeks to get it down. And looking back at when I first started my spreadsheet? WOW!