In digging through emails I found the direct URL to my blog posts about my return to Japan and with that I was able to find some of them in the wayback machine. As appropriate, I may repost them here, but I’m going to start with Nagasaki and Hiroshima since they’re timely. The blog post itself was a followup to an email I’d sent to some friends and family on December 30, 2015 while still in Nagasaki. The blog post was written a week later when I returned to Osaka.

The text of both are copied below with the email I was “responding to” as block quotes — my current thoughts as of 2017 will be at the bottom. The first photo is from a Bookcrossing entry for Bells of Nagasaki and the second was from the top of the original journal entry. The post has only been edited for formatting.

In hind sight, I see the tourism student in me even though I’d not yet completed my NYU application. I wanted stats and figures. One note on timing as I refer to Hiroshima as four years prior – this was before I went back in April 2006. More photos of that visit are here. I really wish I’d found Flickr sooner 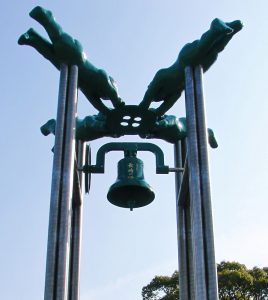 The Bell of Nagasaki in Peace Park

Been debating this post for about a week now, since I first wrote the e-mail from Nagasaki. In some ways I agree with myself, in some ways now, I disagree. I’m going to post the original e-mail with some commentary gleaned from both a week away and the chance to actually digest the Nagasaki experience.

ETA: Aware of the messed up book links, but disabling the plug-in breaks my sidebar. I am awaiting info from the developer.

…not what I expected at all. Nagasaki is far less ‘in your face’ than Hiroshima is. For one, peace park, etc are a fair distance from Nagasaki itself seeing as Nagasaki city wasn’t the hypocentre of the blast, though it still felt the effects. It’s a bit like hearing NY was bombed, assuming city and finding out later it’s state. Close, but not the city. Guess that’s part of the problem with city and prefecture names being the same. Anyway…

Well not exactly. I realised on Saturday when I caught the tram from Matsuyama-machi that I wasn’t as far from Nagasaki-eki as I thought I was, however there is still a distinct difference present between ‘Nagasaki’ and ‘Urakami’ and ‘Matsuyama’, both of which are often referred to as the bomb’s hypocentre.

I hope to get some comments on the ‘other’ Nagasaki up tomorrow or so, but I don’t really have a lot to say about that, and the photos of the two are mixed.

Things here are also much more spread out. A park near the hypocentre which has a memorial, the old wall from Urakami Cathedral, some monuments, the original ‘ground zero’ (disturbing, there is no other word) and the Atomic Bomb Museum and Peace Memorial Hall. The latter two were closed for the holidays. Somewhat disappointed but not really, I think I knew after Hiroshima that I couldn’t walk through that again.

I’m still not certain why Nagasaki has two separate parks. I wish Peace Memorial Hall had been open because I really enjoyed my visit to the one in Hiroshima–it’s totally different to the museum itself. The monuments in Hypocenter Park are basically lacking in English descriptions, but I felt them to be more personalised than the ones in Peace Park itself.

So I headed to Peace Park itself , some 400metres away, which has Peace Fountain, the Peace Statue and some memorials donated in honour of the 50th Anniversary. Personally, I think the US one is crap. But then again, the emotions here are very different to those running through at Hiroshima. Much less English signposting except for the actual memorials, very few English books. I asked why at the Bomb Survivor’s store and the woman said ‘they don’t come.’ Which was, more or less, what Anne and I were told when we went to Hiroshima back in November 2001. Saw more tourists/tour groups here than I did in either trip to Hiroshima, but few gaijin. I don’t know why, and I’d love actual figures rather than shopkeepers’ words but I’d really love to know some stats on overseas visitors. Suppose the museum office might have had them if they were open.

Thoughts on that haven’t changed much, though there were decidedly more gaijin on this trip to Hiroshima.

Other big difference–lack of commercialism in both parks. The A-Bomb
Dome in Hiroshima is right across from one of the main department stores but Urakami is quieter. Only sales within either park are a man doing portraits with the peace statue and the survivors’ store. Amazing for Japan. Also in the few books/brochures at the store, very
much of a ‘we were wronged’ sentiment present whereas in Hiroshima it was more of a ‘this happened, nothing we can do to change it. Lets make sure it doesn’t happen again’ That was four years ago though so I wonder if its a shift in attitude or a difference between the two
cities.

Nope, same attitude is present in Hiroshima. Definitely a ‘let’s not repeat history’ without a lot of finger pointing. As for souvenirs, the rest house in Peace Park in Hiroshima is much better for reference materials than the Survivor’s Store in Nagasaki. When it came to getting copies of
Bells of Nagasaki

I fared much better at MetroBooks at Nagasaki Eki on Saturday. It’s really an amazing book, I keep thinking about it and adding more comments! I think at the rate I’m going, my comments are longer than the book itself!

I’d say I’d see on Sunday/Monday when I’m in Hiroshima, but I’m 99%
sure I’m going to skip the city. Staying near Miyajima and I can get on and off the train at Miyajimaguchi. Miyajima is the reason I’m going back to Hiroshima, I don’t think I need to go through Peace Park a third time. Would love to pick up a few things for people that I
promised, but not sure the shop is going to be open anyway. We’ll see though. I really would like to get a photo of the Dome without scaffolding so maybe I’ll do a quick stop. Not really sure. It might be overload. We’ll see how I feel about it after tomorrow spent seeing the other Nagasaki and a day on the train on Sunday.

I went. I texted a friend from the Park saying that even seeing it three times, seeing the Dome still pulls at my heart. It’s got some kind of power.

It’s harder to avoid the Bomb in Hiroshima–the tram stop itself is called A-Bomb Dome Park whereas here, you have to come looking almost. Given that we’re not at the foot of JR Nagasaki Station, I almost think it would be possible to come here and see the ‘other’ Nagasaki,
the Dutch Catholic city, the martyrs and not see this Nagasaki, but then again I think the people who make the effort to come here probably come for the bomb connections rather than the religious, but I don’t know. Yes, coming here is more of an effort. Hiroshima is on the shinkansen line and on the way more-or-less from Honshu to Kyushu, Nagasaki is on the way to nowhere really. Still glad I came.

Yep, it is definitely possible to come by train to JR Nagasaki and not see the ‘other’ Nagasaki. Definitely a city divided. Nagasaki Station area with the Martyrs, Glover Garden, Teramachi has the history the ‘pre-bomb’ Nagasaki… and Urakami/Matsuyama known only for that awful day in 1945. It’s almost as if they want to keep them separate but I’m surprised the peace park stuff isn’t more signposted at JR Nagasaki.

I’ve learned a lot, even with the main museum closed. Not so much new things about the war and the bomb, but just the feelings. The little things. For as graphic as the Peace Museum in Hiroshima is, Nagasaki says as much in words. From one memorial ‘On that day at 11:02 a.m., Nagasaki disappeared from the face of the Earth’. Nagasaki doesn’t have the Dome like Hiroshima does, because in the area around the hypocentre, there wasn’t even that much left standing. Some bits of schools, a part of a shrine gate and pieces of the cathedral, but
they’ve since been torn down or moved–no physical symbol like the dome left. Still, it made me stop and think.

Actually, looking back the remaining wall of Urakami Cathedral is certainly a symbol–as is the belfry which comes up in Dr. Nagai’s book–but I’m surprised the wall was moved to Hypocenter Park, whereas the belfry was left where it landed. Hypocenter Park was where the bomb exploded, Peace Park is mainly the former site of Urakami Prison and certainly closer to the site of the cathedral…

Sat for a long while in Peace Park. The world is different to when I went to Hiroshima. The mess in Iraq is going on, there’s still the mess in Afghanistan. Regardless of whether we’re technically at war, you can’t help but look around and think what would happen if some genius in office decided the Bomb was a good idea now. I think that’s what hit me. Regardless of what you hear about the war–whether or not Japan had already agreed to surrender, whether the Bomb saved lives–it’s all propaganda on one side or the other. The fact is, it was a world at war and 60 years later, we’re still at war. It’s scary

And THAT is still on my mind a week later. 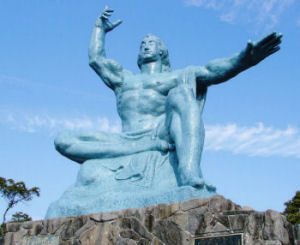 A week? No, try twelve years. I think that’s probably why HIroshima and Nagasaki are resonating with me so much this year.

“What has kept the world safe from the bomb since 1945 has not been deterrence, in the sense of fear of specific weapons, so much as it’s been memory. The memory of what happened at Hiroshima” ~John Hersey

Those are the quotes I used when I posted photos of Hiroshima to Facebook and Instagram on Sunday. They were true when uttered. I’m not sure they’re true anymore.

One thought on “Nagasaki Remembered”