As was the case with the Nagasaki post, this is my post from the January 2006 trip to Hiroshima. I haven’t yet found the April trip and not sure I blogged the 2001-2002 visits. This is the original post, reproduced below with only formatting changed. Current notes at the bottom 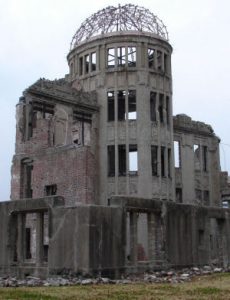 I’m amazed I manage to weed down the photos to only nineteen to post given the sheer number of photos I took of the Dome alone. Pretty much from the time I left Nagasaki I was thinking I needed to go back to Hiroshima city, and not just to get a photo of the Dome without scaffolding. As with Miyajima, I’d been to Hiroshima before–once in November 2001 with Anne and once in January 2002 when Mom, Dad and Jordan came to visit but for some reason I felt a need to go back so early on Monday morning I scrapped the plans to go back to Miyajima and caught a local train from Miyajimaguchi to Hiroshima and from there caught a tram to Genbaku Domu Mae, or the A-Bomb Dome.

On the tram I met two Kiwis, who I ended up walking around with for a bit and at on point the woman asked me How does it feel to come here as an American? and a week later, I’m still thinking about that. As I said from the first time I visited, I do not know how anyone could visit Hiroshima, see the devastation caused, and still be in favour of the use of nuclear weapons. I admit, immediately on hearing the news of 9-11, my reaction was ‘nuke’em’ but that was a) in the heat of the moment and b) before I visited Hiroshima. The thing I like best about Hiroshima is it’s not about blame, it’s about preventing history from repeating itself. I don’t see the point in endlessly debating the past use of nuclear weapons since no one can tell us what would have happened otherwise, but I definitely believe that they should NEVER be used again and I think Peace Park is an excellent living monument to exactly that.

I walked around the Dome for the better part of an hour, just taking photographs and thinking as a storm blew in. Very eerie but seemingly appropriate. It felt wrong to have the park bathed in sun, it really did. I wasn’t walking with any particular destination in mind, but I crossed the bridge from the Dome to Peace Park proper where I stopped in the rest house to get, among other things, a few copies of Scens (sic) of an A-bomb City: Diary of Hiroshima and a pen and notepad made from recycled paper cranes in connection with the NPO Thousand Cranes project.

I headed down towards the cenotaph, pausing to get one of my favourite shots of the Dome framed by the monument and eventually found myself in front of the Museum. When I went with the parents and Jordan I found that I was unable to walk through the museum a second time, it’s just too powerful. Still, I went to the lower galleries to see the current exhibits and then decided to head for Peace Memorial Hall, which didn’t exist when I was there last time.

I can honestly say this ripped my heart out more than the museum did. What the museum conveyed with fragments of toenails and skin, Memorial Hall conveyed in words. You descend in a circular path to the Hall of Remembrance and I can only imagine this is what the Holocaust Museum must be like. As you descend there are panels of information and this one really shocked me because of the near admission of guilt. As far as I’ve been able to ascertain, this is one of the first time Japan’s admitted their role. It’s a refreshing change. As I said, I’m not all about rehashing history, but this is a step forward. It’s hard to hear the occasional student tell me that ‘America bombed itself’ at Pearl Harbor but I know there’s nothing I can say to unteach sixty years of thought, but maybe things like this are a step.

One of the underlying themes of Memorial Hall is Memories that must not be lost and I wholeheartedly agree with this. The same situation that’s facing Holocaust survivors is facing the hibakusha, they’re dying out and there is the fear that their stories will be lost so I think the recordings and multimedia displays are a great idea. They also serve to put a face with the names and the stories to remind us these were real human beings going about their normal daily routines when their lives were all of a sudden shattered.

As I was walking back towards the Dome to catch the tram back to Hiroshima Station I looked up and saw the clouds had broken and there was a rainbow behind the Dome. I’m not sure what that meant, but it hit me and I had to take a few (hundred) shots of it. I don’t normally like the shots of the Dome from the bridge because you get other buildings in them, but it’s OK for the sake of the rainbow. It felt right.

Bottom line, at the end of the day and even a week later, I still can’t answer the woman’s question. I think that as an American in Japan I have a duty to go to both Hiroshima and Nagasaki to learn about the past, but I guess I can understand why others have no desire to visit. I think we all want to get different things out of our experiences and to me a visit to either of these cities is more important than say another temple or shrine. Guess that’s what makes the overseas experience interesting, we all take away different things from it.

After reading the Bells of Nagasaki I’d fully intended to read something lighter, but Japan’s Longest Day

jumped out at me and I’ve been reading it since. I plan to do a proper review once I have time to finish it.

“Please rest peacefully; for we will not repeat the evil.”
***

This is just so resonant a decade on. Hiroshima for me will always be framed by 9/11. It was barely two months after that when I went for the first time. I think even more so now, their lessons are resonant. Is that last quote still true? I don’t know anymore.

All world leaders really need to visit Hiroshima to see first hand what the actions of men cause. Did it end World War II? Yes. Did it solve the problem? No. We had 50 years of Cold War and have been in messes in Asia, the Middle East and Afghanistan since then. We just move the war.

I’ve also since been to not only a Holocaust museum or twelve, as well as Auschwitz and you know what? It’s still Hiroshima that resonates the most with me. I think it’s the US involvement. We did this.