I wanted to run yesterday but as I was at the office until nearly 9 PM, that didn’t happen. Walking home also didn’t happen so my fitbit goal streak ended at 41 days (longest, I think). I was OK with that. Truly. I needed a day off after barely scraping by to goal a few times the last week. I’m at nearly 17K steps today so calling that a rebound.

So I was happy today to duck out in time to hit Central Park before dark fell. It was warmer than this morning so I was able to go out in capris and a tee shirt and I headed to my usual starting point in the southwest corner of Central Park. I had a thought of doing last week’s loop or possible cutting over through the south end of the bridle path to make it a longer loop, but as I ran north east up along the Mall my legs just felt dead. My lower calves/ankles were sore – and not just the one I turned two weeks ago. I went past the 72nd street transverse and my slightly longer loop turn, but as I approached Cat Hill I thought it was probably not smart to do that and turned southwest leading to this. 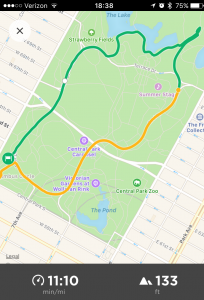 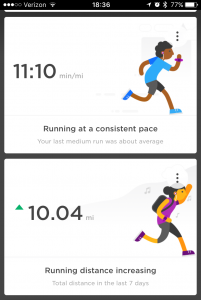 But I wondered why I just fell flat. As I described it on Strava (ignore the b0rked time, it & TomTom don’t play well together):

I’ve logged my food pretty much consistently for the last six and a half years. First it was on Weight Watchers, then Spark, LoseIt and finally MyFitnessPal for the last ~three years. I’ve found that with all the reinventions of Weight Watchers, basic calories is just easier for me and MFP’s interface is nicest. I’m not always 100% in my logging but I’m consistent enough that i can turn to it when I have a question. So I went there. 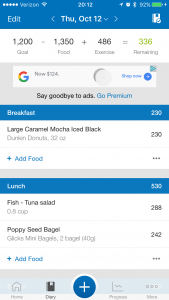 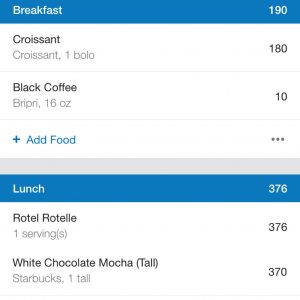 I’m not particularly carb sensitive, nor do I particularly try to avoid or cut back on them but I realized pretty early on today that I was too high on the caffeine. And lunch was almost entirely carbs save for a splash of olive oil. Oops. Last Thursday? Tuna sandwich, aka protein. So much like March and June, lesson learned for after work runs. Oddly,this isn’t an issue when I run on an empty stomach on the weekends.

2 thoughts on “Food logs can talk”