I knew I wanted to work out tonight and didn’t have the attention span to stay on the treadmill at the gym. So I checked Mile High Run Club’s schedule and saw there was something called a Jingle Bell Jog on the calendar for 7PM. It was The Distance, which I did not like the first time I tried. But I figured if it was marketed as a jog I might be able to hang on, and I booked it.

When I got there I realized this was no ordinary “jog”. It was a class taught by the Mile High Run Club founder. Eek! Should I bail. Nope, you’re there. The credit is spent. Do this. I’d actually heard Debora Warner speak and I was curious, if intimidated, to have a class with her.

The class was awesome. Because it was a racing version where there would be male and female winners for who covered the most distance (100% not me!), it was way more on “flat ground” (1.0 incline, flat ground in Mile High speak) . I think that’s what made it doable. That and I decided early that I was going to walk the recoveries vs. trying to run them. That’s where I am right now, and that’s OK. My only goal was to finish, and I did! 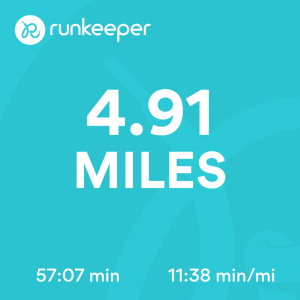 I was pretty proud of that. I set and (mostly kept) my levels as follows:

The breakdown of the workout was a follows:

I think I set my levels right as I didn’t have to lower any of them once into the interval and I was able to sustain three minutes at 5.8 and 6.0 which is definite progress for me. The final interval / effort is the one I was most proud of. The first minute was a runners’ choice (I went with 6.0) and the second was level four sprint, which I started at 6.5 and found enough oomph to take it to 6.7 WOW. In theory that means I could have gone harder earlier, but I don’t think so. That extra smidgen in the tank was barely that.

Maintaining 5.5 on short hills, doable. Maybe one day it will even lead to maintaining it across Central Park hills. A girl can dream

I really, really enjoyed this class. The music was great (Guns ‘n’ Roses is perfect especially Sweet Child of Mine to close it), the atmosphere was fun and not competitive and it just all clicked. More learning? I guess. I had the chance to speak with Debora and that was fun. I didn’t find her to be an intimidating coach at all even if the class was geared toward a much higher level than where I currently am.

The thing I really like about all but one of the Mile High classes I’ve taken is the genuine interest from the classes in each of us. They all seem genuinely interested in why people are taking the classes and what they’re getting from them.  I still don’t get the big deal about these treadmills, but I love the classes.

I still have no idea what “my” pace is, or how any of this is going to turn out in 2018, but in the mean time I’m following the advice of my bracelet 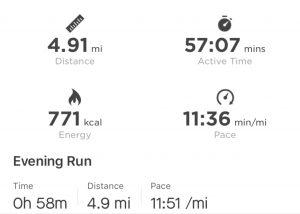