(I was originally writing this over the course of a week to post on 1/1, but I decided there was enough meat that would drown out a year-end recap).

When I came back from the Christmas long weekend, I knew I was in trouble goal wise. As has become custom, when I start the month’s spreadsheet I plug in some 2K step days where I know I won’t hit goal. For December these were:

What I forgot about was that the entire week before the major work event can be a disaster because it wasn’t last year. As early as December 11, I knew there was an issue and I subsequently hit goal only two days that week. Uh oh.

Part of me thought I’d be OK since my 2K days don’t tend to stay 2K days since I started running but Saturday 12/23 was rainy, cold and miserable, and Christmas Day was too busy.

Still holding a 2K day in reserve for some family stuff, I was facing needing four 16K days to get ten months in a row of 400K. That was a tall order. Would the world end if I didn’t get it? No. Especially since I hit both 5m on the year and 1.25m for the quarter, but I really wanted it. Alas, I didn’t want it enough to get off the couch and go to the gym when I got home on 12/26. So we’ll see 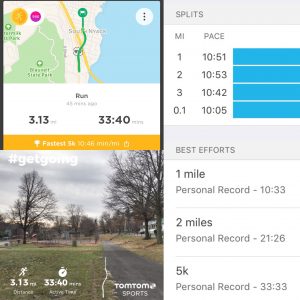 TomTom, Runkeeper and Strava mostly in sync for a PR

There were some good things over the Christmas long weekend. My Christmas Eve run was a present from the Ghost of Running Present, a PR on the South Nyack Trail. The PR itself was 1m9 seconds over the same trail three months prior (and yes, I finally just ran the first lap twice!) and an eight second PR over November 18. I love that RunKeeper makes it so easy to ID and find the similar runs. 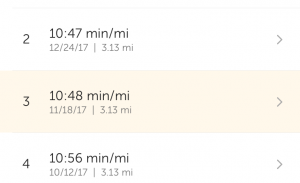 That progress makes me think it is possible that I’ll break 30m for a 5K by December 31, 2018. Even ignoring the really early ones, I’ve taken nearly 5m off my 5K time since June. Baby steps.

It was also a Festivus miracle in that it was relatively accurate across TomTom, Strava and RunKeeper! Speaking of Strava nonsense, I love that #7 on the NYRR/Strava virtual race tips is to run extra because Strava is a muppet when it comes to rounding. (I might do their virtual ones, still thinking about it).

My first day back to reality and my routine was a good treadmill run. I didn’t have a planned distance since my training is off and I don’t want to overdo it and risk injury, but I was thinking about an hour. 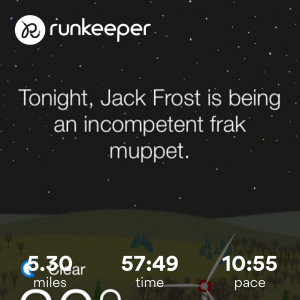 Runkeeper meets What the Forecast

Yep. Lungs wise I could have gone longer but my legs were starting to hurt and I was understretched having been away and hadn’t run longer in a while, so I smartly cut it there. Legs felt good after a good stretch and foam roll.

Thursday’s cross train (29m row, 31m walk) was also “about an hour”. Who am I and what happened to the person who didn’t want to spend the better part of an hour running? 😀