was: #AAM2018, You’re on Sacred Land AKA the conference blog that was never finished ***.

I think Craig Childs first crossed my radar during my New Mexico trip in 2015. I’ve certainly had House of Rain on my Kindle for some time and as I was sifting through a box of books I got from BookCloseouts in advance of a Memorial Day trip I happened upon Finders Keepers. Since AAM rekindled an interest in the people of the Colorado Plateau, I decided to take it with me. Alas it was a super busy weekend trip and I didn’t get the chance to start it until sitting at LAX for my return flight home. Once I started, I could barely put it down.

What’s the difference between a pothunter and an archaeologist, or a museum curator? That seems to be a primary tenet of Childs’ book, which operates under the question of To whom does the past belong? The book is now somewhat dated (2010) but still extremely relevant and resonant as more and more countries begin to ask for the return of their cultural heritage.

Although it draws significantly from the Native American populations in the southwest due to Childs’ extensive travels in the area, the book also identifies other sources of issues: from well-documented situations such as Marion True and the Getty to the Elgin Marbles and the looting of the museums & other cultural heritage sites in Iraq to lesser known areas such as Guatemala’s Peten. One thing that he didn’t touch on, that I found myself wishing he would was other cultural heritage destruction such as the Bamiyan Buddhas. While that was less archaeology and more acts of war, it isn’t completely dissimilar to the question of what happened in Tibet after Chinese invasion, which he did touch on.

The book is a mix of Childs’ own travels as a younger man where he lived at the intersection of archaeologist and pothunter, historical looks at cases that covered the world, and meetings with members of Native American tribes, museum staff and private collectors.

The Four Corners region was of particular interest to me, as it was really my first interaction with the Native American tribes of the southwest. From the Navajo at Four Corners to the Anasazi I “met” at Mesa Verde.  I didn’t recognize the name San Juan County, but that’s the location of Salmon Ruins, my first introduction to the pueblo people. As horrific as a character he was, I really enjoyed the way Childs recounted the story of Earl Shumway as a lens into pothunters and private collectors. Do they really have a lesser claim because they weren’t working officially on behalf of a museum?

The book doesn’t answer that question, but it leads the reader down the paths to consider the question through the various lenses. As George Johnson noted, and Andrew Vasicek further explored, Childs wasn’t perfect in his own actions and that I believe allowed him to see the good and bad in all the actors involved in dealing with artifacts. Among the high profile and complicated figures he explored was Thomas Hoving, former director of the Met. Hoving admitted his actions weren’t always clean:

“My collecting style was pure piracy, and I got a reputation as a shark,” he wrote, adding that his little black book of “dealers and private collectors, smugglers and fixers” was bigger than anyone else’s. ~ Randy Kennedy

Yet he also shaped the way the Met and many other museums look today. Does the good outweigh the bad, or vice versa? Does anyone know the answer, or will it forever be open for debate?

“Navajo traditions are rife with death taboos and rumors of sorcery-makes sense in the Southwest, where bones are constantly weathering from the ground. The Navajo have learned you don’t touch dead people’s things. They aren’t yours. They just bring trouble. This is the Indiana Jones side of archaeology, the curses and chilling adventure. But in the real world, archaeologists do not believe in curses. They do their jobs.”

Sounds like we could learn a lot from the Navajo.

What made me start thinking about the anasazi and other pueblo people?

The Museum of Northern Arizona‘s new installation Native Peoples of the Colorado Plateau, which we stopped at en route to the Grand Canyon on the first day of AAM.

The museum’s bookstore was wonderful “trouble”.

I loved that they incorporated so much tribal input, which really set the tone for the conference which highlighted in many ways how we were on sacred, native lands. It’s a difference in perception from the East Coast where we (or at least I?) think of native lands as the contemporary reservations. I really need to adjust that. The Hohoham were honored and mentioned throughout the program, including a moment of silence before one keynote address. I need to read more on them

That was amazing in a conference whose official theme was Diversity, Equity, Accessibility and Inclusion where the tone was set early with the code of conduct and reinforced on arrival with pronouns available for badge holders. I will-eventually-write up the conference. It was amazing to meet MuseumQueer and many other new friends. 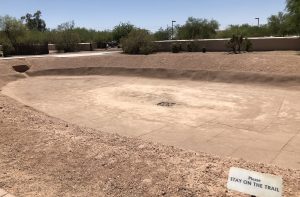 The ending of the conference was just as amazing as the beginning as I lucked out and got a ticket for the excursion to the Pueblo Grande Ruin and Mesa Grande Cultural Park. I knew this was a somewhat crazy decision as it was 100+, but I felt like this was a trip I needed to do: much like Mesa Verde, it’s amazing to see the Native American history in situ vs. in a museum.

We stopped first at Pueblo Grande where our tour included a walk around the ruins, ball courts, kiva and other pre-Columbian architecture (and amazing desert plants!) I found their canals to be amazing and was wowed that they still contained water whereas the Salt River is mostly dry. Planning for the Phoenix Metro uncovered some of the Hohokam architecture and while Childs didn’t specifically speak of the Hohokam in this book, he talked about the vital role of salvage archaeology as cities evolve and grow. I’m amazed Pueblo Grande is extant in the shadow of Sky Harbor Airport. 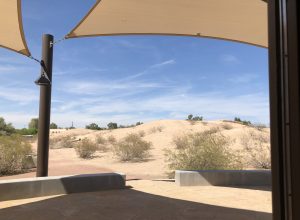 Compared to Pueblo Grande, which is also home to a small museum, Mesa Grande is much less developed. It’s operated as a site of the Arizona Museum of Natural History and due to the lack of indoor space, it’s only open from October to May. It opened in 2013 after a century-long quest to preserve and interpret the mound which was believed to be a religious center for the Hohokam people. We walked around and over the mound (which felt slightly wrong, to be honest) and while we had an amazing guide, I didn’t take in as much as I did at Pueblo Grande as it was just too hot. I understand why it isn’t open in the Arizona summer.

I look forward to returning to the world of the Hohokam and people of the Colorado Plateau either in person or in another book. Besides Childs’ other books, this is definitely sending me down a rabbit hole of more to read on this topic. Just ordered Hoving’s Making the Mummies Dance, which has been on my wishlist for some time. And I need to read David Roberts‘ Lost World of the Old Ones and In Search of the Old Ones.

One thought on “Review: Finders Keepers”