so as I left the Weekly Wrap, I couldn’t decide whether I wanted to run or not. I actually did want to run, but was questioning whether two days completely off would be smarter for my knee’s healing. Despite changing into my running clothes as soon as I got home, I was using that as an excuse to sit on the couch and catch up on email after a few days away. I’ve had my new phone since March and haven’t put email on it-and don’t miss it. So much clutter.

I was less than one thousand steps short of my Fitbit goal and after a few off days due to rain, being in suburbia I really wanted to hit it. So I decided to head to the East River Promenade and just do the top level/Finley Walk loop which is about a mile and see how I felt mentally and physically.  I knew once I got going, I’d go. Oh the mental games we play. 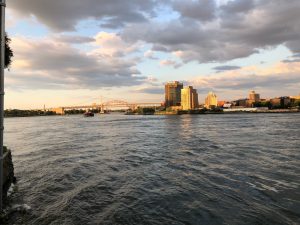 it was such a beautiful evening

I turned south to get the full distance of the upper loop and as soon as I got there, I decided I did want to head south toward 59th street. My knee felt good on the downhill ramp and despite being absolutely gorgeous out, it wasn’t too crowded so I wasn’t forced to play a game of dodg’em. I was pleased to see the first mile come in sub 11:00 after Friday morning’s molasses crawl. The (relative) lack of humidity made a huge difference.  I decided I’d see how mile two came in before deciding whether I’d go for the 5K PR or just a three-four mile run. 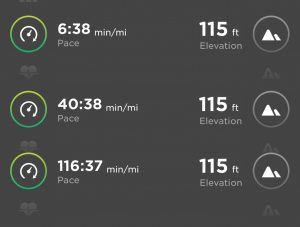 Mile 2 coming in at 9:33 might be a little generous, but it didn’t feel ridiculously off. I’ve had that happen before and since mile two was completely flat along the lower promenade between 60th and 81st streets, I think it’s possible that it was right.  I had mentioned in a comment to Charlie that my watch had been having issues, but this is the first time it was bouncing all over with no scaffolding or other issue that I’d expect to cause it.  I guess it’s time to start planning for a watch upgrade. I’ve gotten so used to the music on my TomTom and I don’t imagine that’s going to be an easy to find, affordable option. Any particular watch favorites? I have a Fitbit I use for daily steps, just looking for something to track runs with so size less of an issue.

I knew mile three would drop off because it has the 450 feet-long ramp back up to Finley Walk, but it felt good and I felt strong as I headed around Gracie Mansion toward Asphalt Green. I couldn’t believe it when the watch beeped three miles at 10:26 and I knew I was close. I pushed hard for the last .13 (Strava math) and couldn’t believe it when I saw my watch. 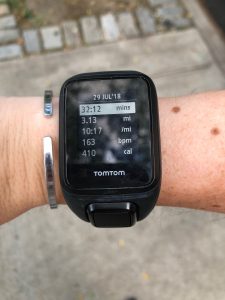 The original plan was to re-start the watch and run home, but the magic hour sky was perfect and I wanted to spy on the Ferry construction so I opted for a longer walking cool down during which I contemplated the run. 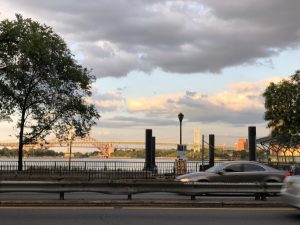 is that a ferry dock I spy? 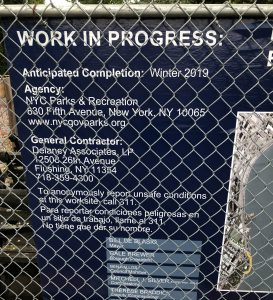 guess it’s not opening this summer

I still had 32:16 on the brain and thought this was a four second PR, but I realized when I got home & could sync watch that it (actually 32:15) was for 3.08. WOW. It turned out that 32:41 was the actual “check in” 5K for July. Strava actually was a little too generous with 32:04 running time, crediting me for the water fountain pit stop.  I’m going with RunKeeper’s 32:11/10:18 pace. I didn’t even get in the full month of speed training that I wanted due to the PF flare and subsequent fall, but this is a-ma-zing. Sub 30 is still a long-term dream, but I’m thinking I may even get below 32 by summer’s end depending on whether I can do speed training in August. Even if I don’t, I’m super happy with how this speed training whim turned out.

Like the Riverside Park run, I loved that this speed/pace happened outside because while I don’t think there’s an unfair advantage in treadmill running, it’s definitely easier to maintain your pace indoors. I’ve had a love/hate relationship with the East River path that stems back to it being the first place I ever ran outdoors, so that the PR happened here was extra special. As I mentioned in Charlie’s post on PRs, I count runs as well as races. This is especially true for 5Ks since they’re so relatively rare as races.

Since the check-in 5K was on the treadmill, the plan for tomorrow is to run 5K there and see what speed comes of it. I’m excited for what the balance of 2018 will bring.