Where on earth did July go?

A theme for the month was quality over quantity. Although I fell off pace on run mileage due to plantar fascitis flare and my first running fall, I had some really good workouts. I made it to the gym thirteen times I listened to my body and easing up on running was not an excuse not to work out, except when I truly needed rest days. I swear, giving up on the daily step goal was truly a relief from over stressing about it. I’ve always operated better with monthly goals anyway. Speaking of monthly, I love how Strava displays monthly stats. Awesome graphic.

I am insanely happy how the speed training went, even if it didn’t go fully as planned. I picked up ten seconds a mile and year on year is just mind-blowing. I am most definitely going to incorporate speed work into fall training. More on that below. 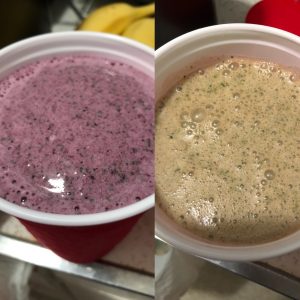 I also did mostly well with my eating. While I don’t deal well with the weight loss social media cliché pizza doesn’t taste as good as skinny feels (Yes. Yes it does, sometimes better), pizza plus the puffiness at that time of the month does not taste as good. So that’s my interim goal: no pizza that week. I was up 3 “pounds” Tuesday. I’m a daily weigher so I’m used to those swings, but it’s a good reminder that some choices aren’t good ones.

On the plus side from last week, I heard back re: the Sarah Marie Design Studio shirt and I’ll be able to exchange it for size. Yay, because I really loved it 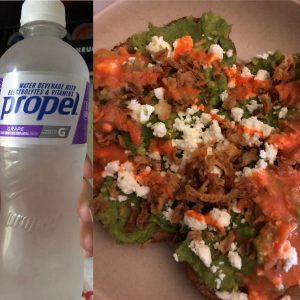 I was 100% not feeling this race. The distance, the weather forecast, all the hills. To be honest, until I actually started I wasn’t sure I was going to. I could not get out of my head this week. Optimistically, I got ready last night. Knowing it was going to be in the 80s with about the same humidity, I froze a Propel and got my semi-traditional long race meal of avocado toast. This was from Just Salad and not LPQ, hence the fried onion and buffalo sauce. This was less about traditional meal and more about what it wasn’t too hot to eat.

I was late getting to bed, and around 12:45 I had a realization that my half-hearted flat Cari didn’t have a sports bra and I wasn’t sure one was clean/dry. I’m not sure what time I finally fell asleep. The alarm went off at 6:30 and while I waited through the snooze window, I questioned whether I really wanted to do this. I finally got up and going  and headed out the door around 7:15.

The humidity hit me as soon as I walked out the door- 72 and 83% humidity did not make for a good run to the start. If I couldn’t do ~1.25 miles easily, how was I going to do 7? My only plan for the day was to listen to my body and I was OK with the fact that that might not mean finishing, smiling or otherwise. The only goal I was even sort of kicking around was to beat the first time I tackled all of Central Park’s hills: 1:32:45 which I’d rounded down to 1:30. 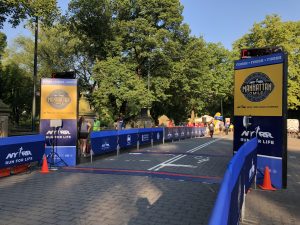 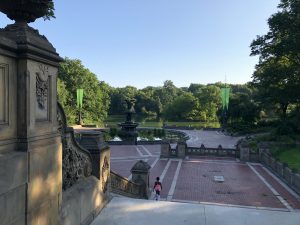 at least the Park looked pretty!

As I made my way from the 72nd Street Transverse to the start I really listened to the emcee who was cautioning that it was hot and humid and they’d raised the race alert to Moderate. That was reassuring, it wasn’t just going to be me struggling out there. They reinforced that we should listen to our bodies and walk when needed. That reinforced my race strategy: walk the water stations and the hills if needed. In addition to the frozen Propel, I had a bottle of water which I’d finished before even starting the race. That was … different.

This was a rolling start and we were off quickly, I think I crossed the start around 8:05. Mile one felt good, although I had a feeling I’d gone out too fast. Mile 2? Water station and Cat Hill, although I was able to run it. I was actually feeling pretty good until the 5K marker, when I decided to walk the Harlem Hill. I actually tried to start running sooner but legs wouldn’t go and I ended up walking almost .4 mile. I was far from the only one. I actually ended up with a run/walk for most of the second half, running when I could and walking when I couldn’t. For the first time in a long time-probably since the last awfully hot race-I was drinking from my now thawed Propel between water stations. At mile six I decided I wanted to try and run the whole of the last mile, but I just couldn’t. My legs were sore from the hills/heat and so I walked until the final .25 mile or so. I was so glad to see Barbara-one of the regular finish line volunteers, Peter Ciaccia’s forever smiling face, and a frozen towel! Maybe not in that order 😀 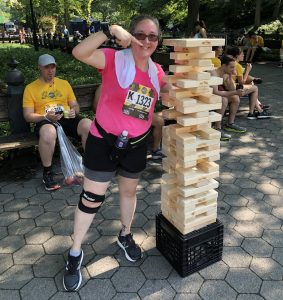 If I was able to smile and horse around at the finish line festival, did I have a little more in me to push harder? Probably, but today wasn’t going to be a “race” even if it was in fact a race. I know I don’t do well in heat, and wanted to be smart. I look at the splits and see what happened as it was, I think if I’d pressed I’d likely have DNFed.

I was in awe of people choosing to be out there who didn’t have the “I paid for this so” element. Some do better in heat, but still. If a run today were part of my training cycle, I’d probably have done it indoors. When I was thinking about this race this week I wondered what possessed me to sign up for an August run, and then I realized it was probably before I realized that I hate the 10K distance and definitely when the plan for summer was to stay in Half Marathon shape. Oops. That said, my fitness wasn’t the issue, it was the heat and humidity. At race’s end it was 83 and “only” 64% humidity. Gross.

This was my last race for summer and I’m oh so glad. I am over the summer heat. It’s part of why I’m leaning yes on the marathon question because as I mentioned to Darlene in the comments, there’s no guarantee my schedule would let me get 9+1 again in next year for 2020.  I’m not sure I even want to race in July and August, and while I know summer marathon training won’t be easy, I think the NYRR group runs are a different feel to races, and I could time shift/move indoors/run in shade if the heat is really bad.

For now, I’m hydrating and hibernating in AC until I take myself for a pre-vacation pedi.

Linking up with Wendy and Holly as per usual:

I’m really happy with this. Yes, slightly off pace but a good month given I was walking wounded. August 2017 was my first 500K step month and I highly doubt August 2018 will be the 3rd. Hoping to come in between 450-475K despite vacation. One of which should have a ton of sightseeing steps and the other will hopefully have some good runs.

No precise run plans for this week due to vacation but hoping to get in some good runs especially if it’s cooler.