I’m not original, #ReadySweatGo is a hashtag my gym has been using for their free personal trainer mini sessions. But like #NeverMissAMonday, it’s a good one. I was so looking forward to some cooler runs on vacation this week. This is equal parts weekly wrap and vacation blog, since there’s zero chance of both getting written up this week so pardon the Vermont interruption.

Also happy to hit 400 miles for Run the Year. Something nice about hitting it in an atypical run location. I’m ~17 miles off pace for the 700 mile goal, but I think it’s possible to pick that up as I ramp up my training for fall, so I’m not too concerned.

While I’m oh so glad to be off racing until September 30 for the Bronx 10 Mile, I’m loving seeing runs in my training calendar err Runkeeper app so I know what I’m “supposed” to be doing. Why am I doing Runkeeper and not modified Hal? His Novice program seems too easy, and the intermediate is harder than I’m ready for. I’m definitely going to incorporate his cross training elements into what Runkeeper prescribes, which is as follows (I have no idea where they get the times from): 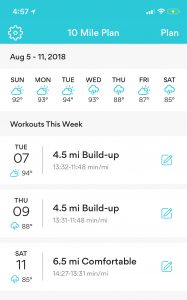 Like everyone else, not looking forward to the weather. I think the various linkup hosts should issue us a challenge, blog without using the word humid. So how did I do?

linking up with Wendy and Holly: 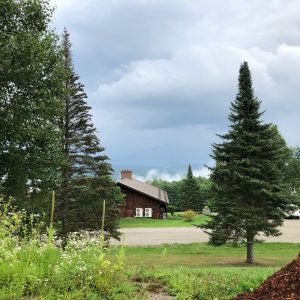 Home away from home for the week 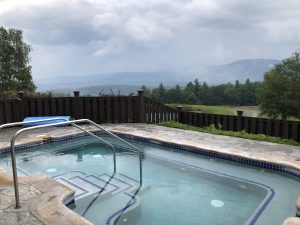 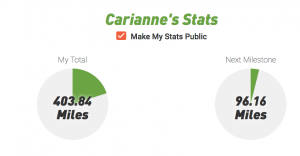 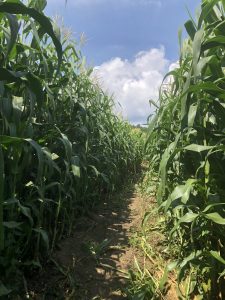 Corn mazes are A THING. We thought we’d never get out

After breakfast, we decided to check out the corn maze, something we’d never done before. I think I can honestly say we’d never do it again either. No shame, we ended up calling the stand and asking for directions out. It was surprisingly warm and sunny after the cool morning, and corn paths are just hot!

After a shower we went to meet everyone else for an exploration of Smugglers’ Notch State Park/Smugglers Cave. This is one of the ways running really changed me-I was excited for an active vacation and scrambling up damp rocks didn’t really faze me, other than a concern of falling. I bought these amazing shoes a few weeks ago and they were perfect for Vermont-more support than flip flops but not as hot as sneakers. This is definitely not something I’d have done before, or if I did so grudgingly, I wouldn’t have been looking forward to it. While skiing still has no appeal to me and there’s not enough money in the world to get me on a zipline, I really appreciated Stowe as an outdoor sports mecca and might have enjoyed more time there. I also love finding ways to explore my vacation destination via running. I’m glad to see that Darlene was a week ahead with that prompt, as it’s something I want to explore and might have time to write this week. 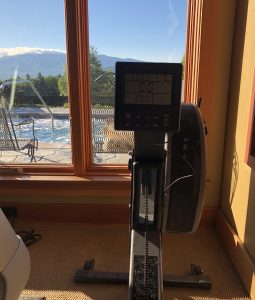 rowing with a view! 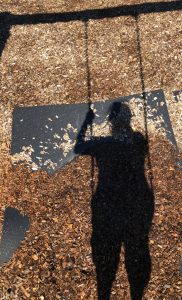 never too old for swings!

The run ended up split in two parts because I was more thirsty than normal and had to refill my water bottle, during which the paused treadmill re-set. Part 1 was much stronger, although I was struggling to maintain a typical pace. Part 2 went off the rails and I made myself do speed intervals to counter the walk breaks I was taking. It was all mental, it wasn’t a physical struggle. I know these days happen, I just pushed through as best I could. Episodes of HAPPY and SVU helped to distract me slightly.  For some reason, the audio from the tablet via my Aftershokz wasn’t as good as run watch to Aftershokz and I was forced to use my old bluetooth headphones and was quickly reminded of why I switched. Sweaty, gross and did not stay put. Clearly, need to find a better solution, although I hope not to have to do too many long runs indoors. The reason I didn’t get 6.5 is I wanted a good stretch/foam roll before the gym closed as I’d been feeling the effects of not stretching after Thursday’s run.

I won’t lie – I also bribed myself with food. For $ reasons, I’ve been trying to cut back on weekend sushi and limit it to race days. But I said if I got six, I’d let myself have sushi tonight. Helped that I really didn’t have any other options in the house and I knew I still wanted the protein. Food reward is not ideal, but I don’t think sushi is the worst of choices. It was truly what I craved, and I let myself have it. My love of sushi is one of many reasons I could never manage a pregnancy. 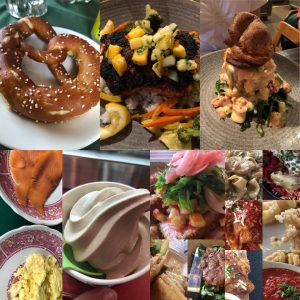 Overall, happy with the active choices I made on vacation. I didn’t let vacation get in the way of exercise and added a new state. Eating could have been way better, but I don’t regret a single bite. Actually, I lie. I regret Friday’s carb bomb and I think that’s probably part of why I struggled Saturday. By the time I got to the airport for my flight, I was craving protein. Alas BTV offerings were slim as were JetBlue’s in flight for a super short flight. I did not help matters by getting Subway for dinner. But overall, choices were good as seafood options abounded. Dinner entrees were cod, ahi tuna and salmon. Desserts were small and I was active. I was catching up on my Runner’s World newsletters this weekend after catching up on past issues on the flight and this came up. It’s true for me. Running is allowing me to maintain, but this ~six month plateau is less plateau and more poor eating choices. Going to fix this in the coming months.

While Stowe wasn’t previously on my radar, I loved it. Easy place for an active or do-nothing vacation, fun downtown shops and one bookstore! I’ve actually never seen Sound of Music, so some of the von Trapp family history was new to me. If the trails had been less muddy I might have gone up to the chapel. I’d definitely love to return in fall, which I imagine is closer to peak. What surprised me vs. other places we’ve vacationed in summer is it wasn’t crazy. At most we waited 5M for a table at dinner and it appeared all of the hotels had vacancy. It didn’t seem to be suffering a downturn, but rather summer is their slower season. You couldn’t pay me enough to drive up to The Notch in winter conditions, though I’d happily enjoy the snowy scenes from the hot tub. It’s not particularly accessible if you don’t drive, but you can probably get an uber from Burlington if no one can pick you up.

Plan for This Week: