Unlike previous trip recaps, my 2018 England trip is not going to be chronological but rather thematic. My trip was rather hap hazard and doing a day by day travelog just won’t work.  I’d like to think they’ll take up the next Tuesdays and Thursday as Travel Tuesday or Throwback Thursday, but I know my own blogging habits to know that probably isn’t realistic. Also, this stupid Flickr plugin is still misbehaving.

Other Write-Ups To Come:

“Two legends are wound about Avalon, the legend of the Cup and the legend of the Sword – the cup from which Our Lord drank at the Last Supper, and in which the drops of His Blood were caught; and Arthur’s sword, Excalibur, engraved with ancient pagan runes. Two traditions meet in Avalon – the ancient faith of the Britons, and the creed of Christ.” ~ Dion Fortune

I knew when this trip came together that I really wanted to do Stonehenge. Like Rushmore last year, I accepted that it would probably be a let down, but it fascinated me. After some research I booked a tour with International Friends that took in both Stonehenge and Glastonbury. The original plan included Winchester but they had to adjust that due to access issues, and Avebury ended up being way more interesting than Winchester would have been.

Why did I go for one that included Glastonbury vs. say, Bath, Windsor, Oxford or the Cotswolds? In short: I have a soft spot for the legends and tales around King Arthur and while I know that Glastonbury’s ties are considered iffy with recent research-not to mention that it’s hard to visit the site of a legend-I still wanted to see it since it was reasonably accessible.

The night before this trip left, I realized I probably should do some reading on Stonehenge and a perusal of NYPL’s Kindle offerings introduced me to Francis Pryor’s Stonehenge: the Story of a Sacred Landscape. I was subsequently pleased to see that and one of his other titles for sale in the English Heritage gift shop at Stonehenge, therefore lending some legitimacy to a book I was enjoying. I didn’t finish it on time, but learned a lot: my review. Speaking of books at Stonehenge’s gift shop, I didn’t buy this Oxford Guide to Arthurian Legends because the font was way too small, and now I find it’s not available for Kindle. Or Nook. First world bookworm problems!

Monday morning started early and I met the bus at Marble Arch. We made two other stops to pick up others on the tour and I was thrilled we were not only a small vehicle, but that we were only seven people. It made everything a lot more efficient time wise, and more accessible. It also felt like a private tour in some ways because the guide got to know each of us, and what we were interested in learning more about. He’s lived & guided in a number of locations worldwide so it helped him contextualize some of the sights we were visiting.

The first stop just minutes away from Stonehenge was Woodhenge, with which I was completely unfamiliar. It was helpful though in teaching us about the Stonehenge Avenue, Cursus and other key features of the landscape that explain how Stonehenge isn’t “just” a circle of rocks. I think that’s what leaves people walking away unimpressed. Key to understanding Stonehenge is understanding why it was constructed and what role it was meant to play for those who lived and made pilgrimages to it. As a circle of stones, it may not mean enough for people considering the travel time from London, but as a place of cultural significance? Absolutely.  Beware of some serious woo out there when researching Stonehenge. 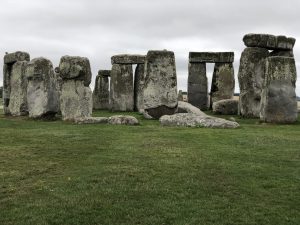 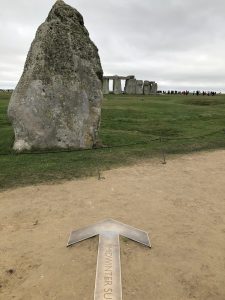 As a tourism professional, I love how they’ve set up the Stonehenge experience. They closed one of the major roads and run access to the Stones via shuttle buses (or a walking path) from the Visitor Center. I think it makes the first viewing even more awe-inspiring. It’s also much more pleasant to walk around the circle without high traffic, although there’s still a road that goes fairly close. I’m glad we were there early in the morning as there was no wait for the shuttles, which wasn’t the case when it was time to leave. Although I think the Stones might have been more striking against a blue sky, the overcast seemed to lend an aura of mystique to them and allowed the different textures, heights and scale to show more. While it’s true that Stonehenge imagery is saturated, it was still great to see them live. Other companies run tours where you can go in early or stay late, and I’m not sure that’s of interest to me – it would be a very long drive only to do Stonehenge. That said, sunrise or sunset at the right time of year could be pure magic. 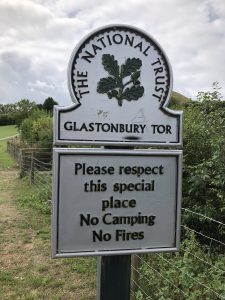 National Trust sign near lot adjacent to the Tor 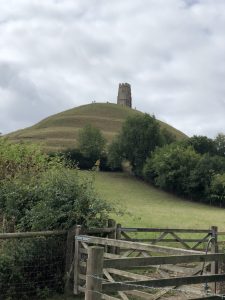 From Stonehenge it was a long-ish drive to Glastonbury, reported to be a very hippie town. I actually didn’t find it overwhelmingly so. Our first stop was Glastonbury Tor, just outside town. It’s run by the National Trust who share some of the legends about the Tor. On some level, the ties between Arthur make historical sense, especially the Tor and the adjacent Somerset Levels’ flooding throughout history. Do I believe King Arthur was literally a man who walked the soil of early Britain? No. Do I understand where the legend/fairy tale could come from and survive? Yes. The setting is perfect for these stories. And who doesn’t love a good fairy tale? 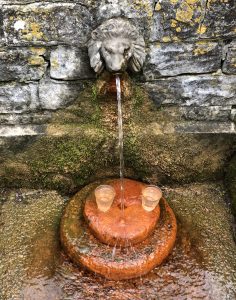 Arthur isn’t the only story with ties to the region. Chalice Well is claimed to be the place where Joseph of Arimathea brought the chalice from the Last Supper. I’m not a Christian, so it isn’t my place to judge a religion that isn’t mine’s history – but I’m more than a little confused how this man would have ended up in the English countryside. Northern Spain along the Camino de Santiago, or somewhere in the Mediterranean? Sure. I’m a little iffy on England.  And yes, I drank the kool aid err… iron water. A week later, I’m still breathing. It tasted better than Ponce de Leon’s Fountain of Youth which was more sulphury. Still, it was an interesting piece of history to learn about and pilgrims continue to come to Glastonbury for both of these as well as for the stunning remains of the Abbey in town. 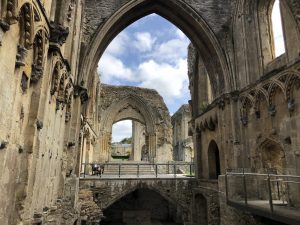 Like the rest of Glastonbury, the ruins of the Abbey are tied up in a mix of history and legend. Do I believe Edward I oversaw the reburial of Arthur and Lady Guinevere? No. But tourism was understood to bring money throughout history so I can see why that story was promoted. As someone familiar with and interested in the legends around Arthur, I’m confused how they were ever buried since it’s alleged that the Lady of the Lake took him… But I digress. What stunned me about the Abbey was its construction. It’s not like the contemporary churches where we understood how they were built. This, the Great Pyramids, Stonehenge… just how did they construct these? How did they reach such great heights? It must have been stunning prior to the fire. And the recent research around the glass found at the Abbey site is phenomenal. Whatever the myths and legends around Glastonbury, it was active and thriving until the Dissolution. Impossible not to think of what could have been.

While I’m not Christian (or Pagan), I’m fascinated by myths, legends and religious histories so I was happy to find Glastonbury: Avalon of the Heart available in Kindle edition through NYPL. Unfortunately it was a little too heavy on the woo for me, presenting some of these stories as literal fact. I’m not sure if that was the author’s bent or just a factor of it having been published in 1934, but it didn’t complement my experience the way Pryor’s Stonehenge book did. To be fair, a number of the reviews clearly said this wasn’t the book for skeptics. We didn’t have time to climb the Tor, but this is an interesting look at it and I found it more accessible as it was steeped somewhat in facts and history to go with the myths.

Although I’m a non believer, I found Glastonbury fascinating. In many ways, it’s how I felt about Israel when I went. Was there a King Herod?  Maybe. Masada is a stunning fortress regardless. The other tie between the two that fascinated me was linguistically: Tor was a hill and when we were in northern Israel we learned that “Armageddon” comes from Har/Tel Meggido an archaeological mound. I’m not at all familiar with Celtic or Hebrew, but that caught my attention immediately. 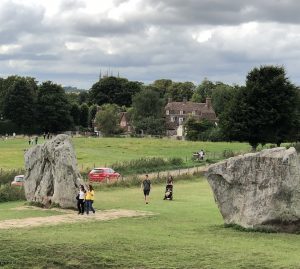 The tour originally called for Winchester, but when the guide explained the access challenges and the fact that the round table has been proven to be an reconstruction, we were all sold on Avebury as a replacement. It is no loss, it’s the largest Stone Circle in Britain and surreally empty, save for sheep. I’d heard of Silbury Hill, which we saw on the drive in, but the only stone circle I was familiar with prior was Stonehenge. It was amazing to see the scale of Avebury’s, and to be able to walk among them. While the perimeter was a clearly delineated line, the other stones appear haphazard but it may have originally been a square formation. While current research leads to the belief that Stonehenge was associated with death rituals, it is believed that Avebury was associated with fertility. Both of those make sense within Pryor’s point that religion played a larger role in the prehistoric people’s lives, and the artifacts that seem to show that no one lived permanently at either location but traveled to them.

If this were my tour to design, I’d flip Avebury and Stonehenge. I understand why that isn’t done — the crowds at Stonehenge would be insane on a nice summer afternoon — I think there’s a lot to absorb at Avebury that would be easier to take in on a fresher brain. Maybe that’s just me. We didn’t visit the museum or any of the other National Trust facilities, and I’m not sure I’d go back in order to do so-but I’d love to learn more about the site since it’s so complex.

Overall, a great intro to/refresher on pre-Roman Britain. Pre historic as a term drives me nuts. You can’t be pre history!