What a wonderful whirlwind of a week. The city has been a rainbow of color, from Roosevelt Island to the main branch of the New York Public library and beyond. It also meant a super busy week of events culminating in a Guinness Book of World Records entry and Sunday’s Pride March. 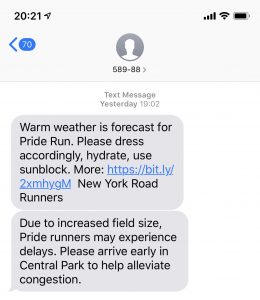 Saturday morning came early as a friend invited me to join a group of her friends for Saturday’s added mileage. With temperatures forecast in the 90s (ick! sorry Kim,but ick!) we decided to run before the race’s 8:30 start. I was a few minutes late to meet them but quickly caught up with them a few minutes after 7 on the Lower Loop of Central Park. We ran/walked a little more than four miles including this fun shot at the start line. 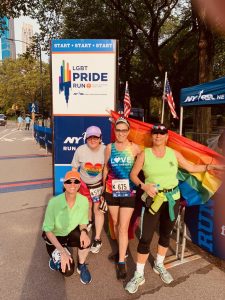 empty start line. Photo (c) random other runner for whom we reciprocated

I left them for a bit to go use the (actual) bathroom and then headed for the corrals. With some 12,000 starters (and more than 10,200 finishers!) it was a little bit of chaos and took 25 minutes to cross the start. To accommodate the larger field

I’d lost Elizabeth, who I ran Italy with, in the chaos of the start but she found me between miles one and two. I’d decided early that with the heat and it being a long run I was going to take it easy, and that’s what we did. We walked the hills and ran shade/downhills. This was very much a fun run taking in all the ways people chose to celebrate Pride on the 50th anniversary of Stonewall. I also took care not to miss a single sprinkler! 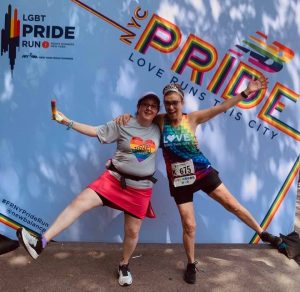 There was much silliness at the end, fueled by popsicles. Speaking of fuel, ooph. I had a breakfast bar on the way to the park and had my cherry blossom chews with me but with the heat I just was not hungry. The time wasn’t good, but I wasn’t worried. 9+ miles in the summer heat is something to be proud of.

Quick run down with Kim and Deborah:

The scheduled workout:  Fartlek
What?  Runners will do 3 miles of 30/90 fartlek – alternating between hard for 30 seconds and easy for 90 seconds. 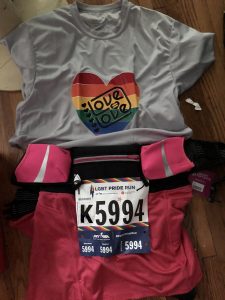 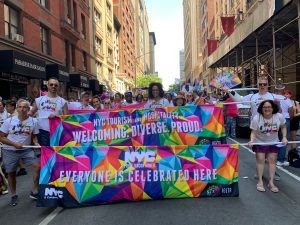