Amazon tells me I bought Scott & Jenny Jurek’s North on July 3, 2018, shortly after I finished Eat & Run. Oops, didn’t mean to wait this long to read it. Linking up with Kim and Zenaida for Tuesday Topics to discuss this book. 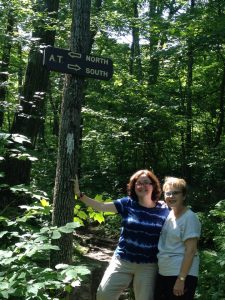 Let’s start with the ways I am not and will never be Scott Jurek:

That said, I really enjoyed this book. Coming off a hike in the Anza Borrego section of PCT and needing a new challenge, Scott and his wife Jenny decided to go for a Fastest Known Time (FKT) on the Appalachian Trail. In the interim, this journey took on a lot more significance as he struggled with who he was at a time when he was no longer a competitive ultrarunner and he and his wife struggled to start a family.

The crux of the journey begins with their drive from Boulder, CO to Georgia in the van that would be their home for the next 45+ days as they chased the record. Factoring out a record as that is just not within my ability, I’m not sure which would be harder: hiking or living in a van for two months. They had occasional nights with real beds & showers, but ick. No. Can’t do it.

The photo above is the only segment of the AT that I’ve knowingly walked, although I’ve walked the Long Path near Harriman/Bear Mountain on a number of occasions and probably walked part of where the two intersect. On the Western Mass segment we lasted about twenty minutes and had approximately the same number of mosquito bites. While I love running, I am so not outdoorsy. I have no idea how Jurek dealt with a mystery rash, poison ivy, and smelling like apple cider vinegar as his muscles broke down despite eating 7-9K calories a day.

Both Jureks touched on the contrast between the AT, PCT and Continental Divide Trail being that so much of the US population lives within a day’s drive of a segment of the AT and as result, it has higher hiker (or hicker) volume and all the pluses and minuses that go with that. While they didn’t paint a rosy portrait and acknowledged the possible dangers to Jenny waiting for him or Scott hiking based on the trail’s grim history, they did realize that the access to vegan foods and other staples might not have happened in the past on the AT and/or now on another trail.

While Jenny was his main crew chief, the two of them were joined by other running friends on their 2000 mile journey from Springer Mountain to Katahdin. Horty and Speedgoat were the two who spent the most time, with El Coyote a close second. As Scott and Jenny alternated sections of the book, it was interesting to see both sides of the journey and their individual opinions of the friends who joined them. I smiled when Topher was mentioned as I always enjoyed his antics with Dean Karnazes. I also enjoyed the trail angels they met along the way: the ones who sought them out as well as those who greet all hikers throughout the season. I found it good that Jurek acknowledged others’ opinions on his quest, moving at an overall average of roughly 1.77 mph to set the record, when others took five – six months. For me personally, it was the running angle that made this book interesting – I’ve had no particular desire to read other peoples’ accounts of their trips on any of the hikes. For the same reason I’m intrigued by the Netflix special on Speedgoat’s quest.

I didn’t know going into this whether he was going to set the record, so I’m not going to spoil it for other readers. If you do know the outcome, I still think you’ll enjoy his physical and psychological journey from Georgia to Maine.