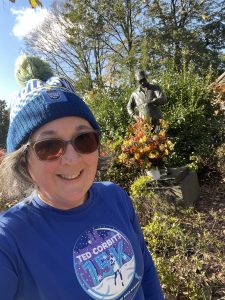 Hi Fred, while in my Fred hat 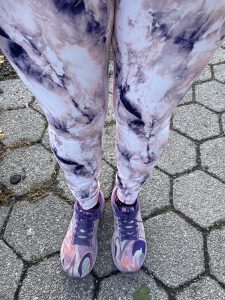 Work has been crazy. Running has been inconsistent but finally trending in the right direction after few days with minor (non-Covid) cooties and despite an attack by the wet leaf monster last week that had me briefly worried I’d broken an ankle. Did a test run yesterday to decide how crazy it was to attempt a 15K on December 3 and welcome back runners’ high! 7.3 (ran short on time) flew by by like it was one mile. That made me very happy.

I’m not running down the month of November, but did want to share my review of Alison Desir’s Running While Black, which is among the top books I’ve read this year.

Alison is about my age and as I mentioned, I’ve had the chance to meet her a few times at NYRR events. As excited as I was for the book, I didn’t immediately start it as I was in the middle of another good one and didn’t want to rush either. Plus, as much as I multi task fiction, I can’t do it with non-fiction. Once I was able to start Running While Black, I read it in about three days and could have been even faster if work wasn’t crazy.

Alison is the daughter of a Colombian mother and Haitian father who made sure to teach her their history as well as the American history she learned in school. As she walked us back through her childhood, especially choosing to tell the story of Ota Benga rather than a more known person for a biography project, it was easy to get a sense of Alison heading on to bigger things. But her path was neither easy nor direct as the book opens with her making the decision to train for a marathon with Team in Training while struggling with depression.

The Only was a theme throughout her book: one of the Only Black women at TNT, and The Only person to show up for weeks when she launched Harlem Run, but her perseverance is what made her push through in her varied goals. It was sad to read about the struggles she faced in launching Harlem Run, even among the Black running community in the city. By the time she launched Run 4 All Women, running was almost a tool for her advocacy work rather than fighting depression as it started. The book also spends a lot of time talking about Ted Corbitt and other Black pioneers in the running industry and why firsts such as Kathrine Switzer are in the spotlight and Aaron Morris are overlooked. She raised some of the same questions I’ve always had about why the race that honors Ted Corbitt is buried on the calendar without a medal, but I’ll also say that NYRR is also uneven about honoring their white founders with Fred Lebow’s race being demoted from 4/6 status and Grete’s Great Gallop moving from a Half to a 10K and then to August when no one wants to run.

Alison took a larger step into the national running spotlight she went viral questioning why the running industry wasn’t speaking more loudly about Ahmaud Arbery, and subsequently wrote a longer piece for Outside Magazine that addressed the issues. This subsequently led to her role on the Running Industry Diversity Coalition.  I loved when Desir got excited about Lauren Fleshman sharing her post about Ahmaud Arbery because I just recently read Fleshman’s Good for a Girl, which was another amazing read. While not the intersectionality that Alison wrote about in her book, the overlap and connection between their running stories was great.

I had wondered what led Desir and her family to relocate to Seattle, and she touched on that in the book: policing issues, food desert, air quality. And she drew an interesting parallel to why her parents moved to Teaneck rather than raise their family in Harlem where they had lived.

An excellent read overall, and one I’ll likely reread. I know several of you, including Michelle, have a copy (and Liz will when the mail gets itself together). Have I missed any reviews?

3 thoughts on “Review: Running While Black”