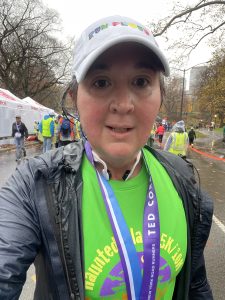 Alternate caption, which I feel like is common in race photos: Why am I doing this again?

I love this race so much I will run it in the pouring rain. It was my first true distance run and 15K/10M is my happy place.  I racefess though that I almost wish it had snowed. You get less wet. I further racefess that this was a poor effort, at best. It was a PW and I don’t remotely care. Work has been too crazy to even try to focus and I knew I’d finish because it’s Central Park and even when they had permit to close the running lane, NYRR can’t sweep you. Plus it’s really hard to have a bad day in Central Park. 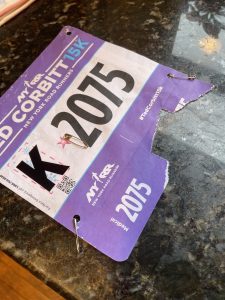 the dog ate my bib. Truly! Luckily this was post race

Linking up with Kim and Deborah to talk about this race since the rest of the last two weeks has basically been run commuting because there was otherwise no time.

Having just finished Running While Black, I had some thoughts about how Ted was handled and I admit I was pretty pissed off when I saw this was just a cotton tee and not even a technical one. A little reading gave me the connection to the Pioneer Club, but I don’t think it came across well. I feel like a good number of NYC runners don’t care about “don’t wear the shirt before you’ve earned it” and it’s fairly common to see the race shirts in the back of the pact, but cotton tee plus rain meant we saw fewer race shirts. My first Ted shirt is one of my favorites but it was bizarrely too warm to run in a long sleeve tee with a windbreaker so I went pastel Christmas tree.

I knew going into this race I had no business running 15K. However two 7-8 mile runs in the last few weeks told me I could do it without injury and I decided to go for it, mostly because three friends were running and I wasn’t missing out on that. I only have one DNS in my “career” and that was a rainy cold morning. What saved last Saturday was it was in the 50s. If it hadn’t been, or if it had been pouring when I woke, I’m not sure what would have happened race wise.

Now if you’re barely trained for 15K, what shouldn’t you do? Oh I know. Run ~1.5 miles to the start? But really, there’s no easy way to get to E. 66th and I was running late and couldn’t walk it. On the plus side, timing wise, it was well timed to not cool down too much so it served as a good warm up. Darlene and I couldn’t find one another at the start but I did find another friend and we chatted before going into our respective corrals (Ish. They had already collapsed) and waited to cross the start. I found out later that Meb was there and wished I’d looked around at the start. 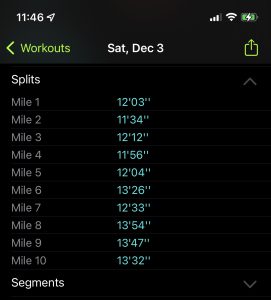 With the start at E. 66th, Cat Hill is the first mile and even with the wet leaves, I ran it. The best superficial thing about Ted is no Harlem Hills. The course is E. 66th-102nd, down the west side around the bottom of the park, up to 102 before turning east on the 72nd Street transverse. What’s the longest I’ve run since July 31? 8.5. Where did I slow down? ~7.5 (including the warmup). That’s part of why I’m not mad about the results. The other part? It started raining sideways and there’s a limit to what I’m willing to run in that because I have no interest in a fall. If you’re thinking this looks familiar, it does. It’s exactly what happened with the February Half. The wheels don’t come off, I just slow down before they do. The background on both is the exact same: undertrained. But I’d always rather be undertrained then skip a race because I always have fun on the day of.

I’m tired of being undertrained though and am determined to be ready for March. Yes, that will be my 13th 13.1. I was toying with Fred, my beloved first, but I’m out of town and I know I will not enjoy the CP loops. Whether I’d have been able to say no if I were in town… As I said to a friend about a non running situation, at least I have good reasons for crazy decisions.

Ted through the years

Yep, PW by almost exactly 4M. Like in 2019, work was bananas. But a race is a good break from working through the weekend so I’d rather run any day. Looking at last year though, maybe it’s worth finding a Fall half next year because a 15K is “easy” when you did a Half a few weeks prior. And yes, lapped on the 102nd Street transverse once again. 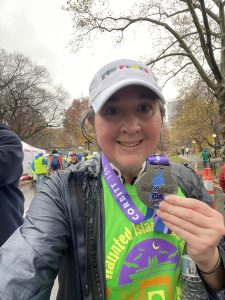 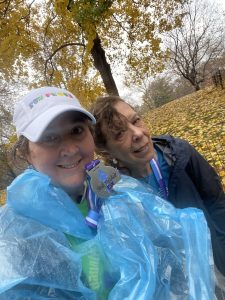 running friends are the best friends

The medal was a surprise as Ted has never had a medal before. I’ve been giving most of my medals away, but I think I might keep this one. Two shout outs: Deborah for this hat that was perfect for keeping the rain out of my face and Darlene is amazing for camping out in the bathroom to wait for me to finish! So fun to catch up briefly. I then made a mad dash to a friend’s to dry out over coffee before heading back to the office. 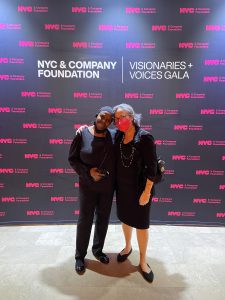 We clean up nicely 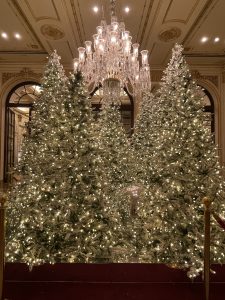 so does the Plaza

Monday night was our gala. Really proud of the team work to bring it together in a short timeline and love my colleague finding me a pink (dinner accent color) mask to accessorize. It was a really late but amazing night. We’ve done the dinner in a number of venues, but there’s just something about the Plaza. 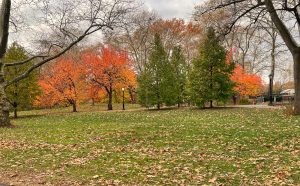 In Central Park there is simultaneously October 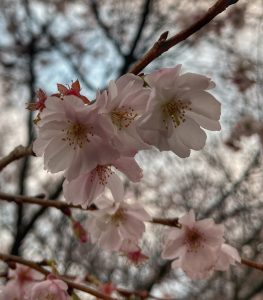 Lots of run commutes because ~ 2 miles is better than none when I didn’t have time to run before or after work. The winter cherries, while I know what they are now,  still make me chuckle when other trees are still in October. 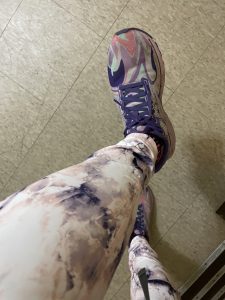 so if neither can match with anything else, do they match each other?

These shoes have been a favorite for a while — the pants are now joining them. 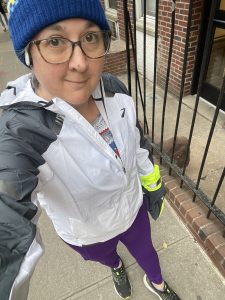 and my Black Friday present to myself

and this jacket! I’m not sure hi vis it actually is, but it’s a lot better than the navy blue one I usually live in. And the gloves have thin mitten converters. I love last year’s pink ones, and the turtle convertible ones Kim mentioned a few years ago. Can you really have too many gloves?

Endeavoring to dig out and keep up now that things are slightly calmer. We’ll see.