I had only vague plans of what I wanted to do after finishing the Trinity Church tour. Walk up to the Lower East Side and explore more of my adopted home? Walk down to Wagner Park and read while taking four million photos of the Statue? Walk the last section of the #GreatManhattanLoop that I did via bike earlier this summer?

The answer, unsurprisingly, ended up to be none of the above. I’ve been talking about exploring Lower Manhattan a lot and I decided when better to do it then when I was already down there. So I left the church yard and headed across Broadway and east on Wall Street. I had of course seen the Stock Exchange and Federal Hall previously, but never in day light. Come see the vampires of New York! Federal Hall was a miss (aside from a pair of crazy OWS protestors calling the reopening of the Statue the work of Communists) due to the Shutdown as it’s a National Park. Additionally, George Washington is behind scaffolding. What is it with our 18th century historic figures hiding behind scaffolding? The Stock Exchange, however, is phenomenal. I really had no idea how big the building was and I love its grandeur when compared with the more pedestrian American Stock Exchange building.

Intrigued by their Fed at 100 exhibit, I continued down Wall to the Museum of American Finance (48 Wall, former Bank of New York Building). Pleasant surprise: free admission. The exhibit is awesome and not just because I’m a ridiculous banking & economics nerd. It’s really well laid out and accessible to all segments of the population, no matter your level of comfort with the Fed. Plus it has figured of Hamilton and Burrr mid-duel. The museum’s shop is small but good, especially its collection of books.

Speaking of the Fed, I don’t know how many Money & Banking classes I took in school, yet I’d somehow never seen the New York Fed. I wasn’t even entirely sure where it was until I read the release for the Museum’s exhibit. 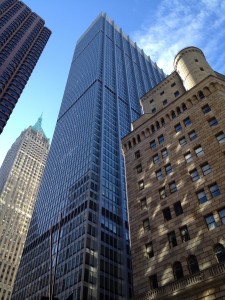 It’s a relatively unassuming building from the Liberty St. side with the only indication of what the building is a plaque on the southwestern corner, but from the Eastern side and Maiden Lane? I actually didn’t realize I was looking at the same building. If you think the NYC skyline is boring or the same throughout, I’d argue you’re really not looking. I love the architecture of the Fed and many of the buildings in this area and I definitely need to find time to explore it more. Ideally after I read a guidebook so I know what I’m looking at. I didn’t recognize the infamous 20 Pine in the photo above until someone mentioned it.

One thought on “A walk down Wall Street”