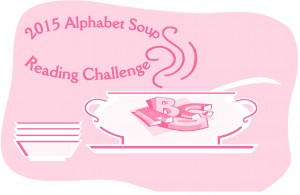 Liz’s post got me thinking about a 2015 goal and I wasn’t sure where I was going since without the Bosch series, I don’t really have a prayer of repeating 2014’s numbers. Then I came across Sally’s 2015 Alphabet Soup Reading Challenge post (with more info and registration here) and I decided that could be a lot of fun. I think it will also help me personally with reading new titles in the year they come out, which I haven’t been good with of late.

It’s an alphabet challenge! The challenge is to read one book that has a title starting with every letter of the alphabet.

You can drop the A’s and The’s from the book titles. For those pesky Q, X AND Z titles the word with the challenge letter can be anywhere in the title.

Need some help finding titles to match the alphabet – Jandy’s Reading Room has a wonderful list to get you started.

Books can be read in any order and all formats – print – e-book – audio – are acceptable for this challenge!

Here is my list – many I have planned already from my TBR pile (in italics means I haven’t read them yet) – the rest I will update as I go. Maaaybe I’ll even get back on track with reviews, but in the mean time here’s a link to my books in the challenge on LT. I’ve tried for a good balance between fiction and non and I’ve also included a few that I really want to finish. A few are 2015 new releases and some have been on Mt. TBR way too long

ETA 3 January: bolded books are ones I’ve actually read along with date