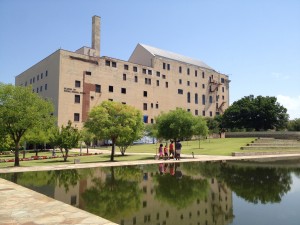 I’m reading The Fire Inside by Steve Delsohn after reading about it in an AskMe that was recently linked in Meta Talk.  I have no interest in becoming a firefighter, but it got me thinking. I knew it was somewhat dated as it didn’t cover 9/11, but it was only when I went to add it to my LibraryThing that I realized it dated to the mid 90s. Unsurprisingly, there was significant attention paid to Oklahoma City.

I was recently thinking about OKC, again when I found the postcard I bought that I was, sadly, using as a bookmark. 2014 was definitely a year of dark tourism for me, which I briefly touched on as it related to Charleston. I subsequently visited the 9/11 Museum before it opened to the public and followed both of those with a visit to the Oklahoma City Memorial during a visit to that city in July.

I haven’t yet read the books I mentioned after the Charleston trip (Kindle versions, people!) but I’m going to read  Marita Sturken’s Tourists of History:Memory, Kitsch, and Consumerism from Oklahoma City to Ground Zero when I’m done with the Fire Inside. Clearly OKC is still lurking within my brain.

From ground zero in New York and Katrina’s destructive force in New Orleans to the Auschwitz concentration camp in Poland and the Killing Fields in Cambodia, witnessing places where horrific deaths have occurred has for many become an integral part of experiencing a destination. ~ Michelle Baran

That was true for me, although it took five? visits to OKC before we went downtown. During my first visits in the late 90s, the Memorial wasn’t open. My friend’s husband, stationed at Tinker, told me of being rostered down there for clean up. By the time I went back in 2003, the Memorial was open, but I wasn’t ready. This year, I was. Like the 9/11 Museum, I like that the OKC Memorial is free while the Museum provides additional information/education for those who choose/are able to pay. We spent about 2-3 hours at the Memorial and Museum and it was eye opening. It felt like a pilgrimage.

I cannot believe it has been 20 years. When 9/11 happened, I was an adult and living on the other side of the Pacific Ocean. I’d never been to Oklahoma City but Terror in the Heartland stuck with me both as a high school student when it happened and 19 years later when I finally made it to the Museum.

Oddly I feel different about the 9/11 Museum and OKC then I do about Auschwitz and Charleston. I wonder if that’s a matter of them being within my lifetime?