I’d been eyeing the New York Road Runners’ Spring Classic but thought it was too far a distance, until a friend asked if I’d run walk it with her. On Wednesday. The run was Saturday. I figured that worse comes to worse I’d walk it. I’ve certainly walked the Central Park Loop many times. I kept reading about the course and the hills, I was already worried about Cat Hill but I decided it couldn’t hurt to try. With a course like the Central Park loop, it’s not as if you can get swept and there are plenty of vendors to buy water if the stations had closed. So with that, my only goal was to finish the 10K loop and enjoy it. 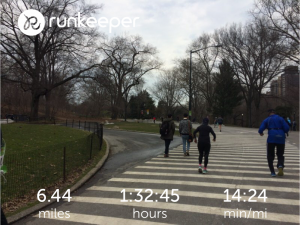 And I mostly did. The Harlem Hills were not fun, and I was seriously dragging by the time Cat Hill came between miles four and five. I walked when I needed to, and especially through the water stations as I can’t drink and run. Having my water bottle with me was a good idea because it was easier to sip from a cup and then pour it into my bottle and save it for later in the run.

The volunteers were great, as were those fans on the course and the runners who’d finished early and were headed out. I was zapped by the end and couldn’t summon any oomph even when the finish line was in sight. But I finished and I wasn’t last. I knew I wouldn’t really be able to compare my times to my 5K in Riverside since Central Park is much hillier, but it felt good to run in much better weather and to realize that I could do a 10K even if it wasn’t a good 10K. It was a fun race day atmosphere and I pretty much turned it into a personal fun run. Yes, this was from the person who not long ago never intended to enter a race.

I had today’s four miler on the books even before last week’s 10K. It was actually what had me worried about Cat Hill, but I knew it would be a fun run. As the weather dawned cold and rainy – but not as cold as Penguin (best baseline ever)! – I grew hesitant. Would I really get out of bed and do this? Would I enjoy it? Would Cat Hill kill me? 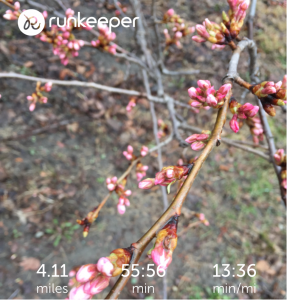 Signs of Spring during the Run to Breathe

It was odd facing Cat Hill within the first mile and having last week’s home stretch be barely into the race, but it felt like I hit the halfway point fairly quickly once I got into gear. I was pleasantly surprised by my first mile time and was happy to still be perky when I made my second left and headed on to West Drive. Only walks were through water stations, yes, I made it up Cat Hill without walking. I think not running yesterday was smart. Only pauses were to stretch calves on the hills. They were really the only thing that hurt, but we’ll see what tomorrow brings.

In contrast to last week and surprisingly since I didn’t have walk breaks, I felt like I still had something in the tank today. At 3.5 miles I ran faster and felt like I could have gone more as the #RunToBreathe was winding down and the finish line/festival was in sight. I’m hoping for some good finish line photos as I was a happy ham. Runkeeper also tells me this was a personal best for a 5K at 42:30. I’ll take it.

It took me almost 10m, 9m51 seconds to cross the start line so I wasn’t worried when the clock at the finish said said 10:05. I knew I’d finished in under an hour. I didn’t have a goal time, but that was a nice feeling. I haven’t really concentrated on speed, but I made the decision to do so after the 10K as I don’t have a desire to run any longer distance at this stage. I’m going to try to run outside during the week if I can – it’s just much more pleasant than the Dreadmill, even with my new headphones. We shall see. Still enjoying it while it lasts and continuing to raise money for Joyful Heart.