I started the #GreatManhattanLoop project because I knew I could never finish the Saunter. That was ~50lbs ago and before I discovered my Fitbit addiction. Two attempts and five/six years of walking Manhattan later I’ve realized I’m never going to finish the Saunter and I’m OK with that.

Last time I walked 19.5 miles and yesterday? 22.5. No shame in that. While I had a mental image of going all the way in my head I nearly dropped out much earlier so 22.5 miles is way more than a moral victory. More on that later.

Looking back at the photos from last time (and IG for the project) I realize how much has changed. Aside from the opening of Hudson Eats at Brookfield, the Seaglass Carousel is open, Hudson Yards is blooming and the end of the Greenway on the west side is finished. Can only imagine what this walk will look like in ten, fifty or one hundred years.

As I went digging through the #Loop archives I realized that the 2017 Saunter and photos were a walk down memory lane to areas I’ve explored the last few years. Especially when I first “finished” the “Loop”. That’s a fun feeling and why I love the Saunter/Greenway. I was very excited for more/better photos this year because of my new camera. I went to turn it on to take a photo of the Statue of Liberty in the mist and… dead batteries. In my quest to be sure both phones and external battery packs were charged, I forgot to check my iPod and camera. Fail. That’s when I first had an inkling I wouldn’t finish. I didn’t think I could do it without music. 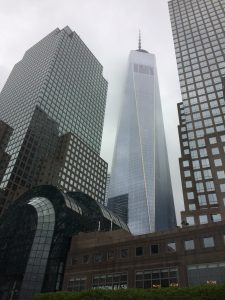 One World Trade and the Winter Garden, May 2017

Even though I was just in Battery Park and the Battery Park City portion of the Greenway for the 9/11 Memorial & Museum 5K, I didn’t get to take it in as I was jogging. The lower portion of the Greenway and its piers were the first walk I did on the loop and places such as the above (so very different five years ago!) and the AIDS Memorial still catch my attention. Wary of last time’s lessons, I switched into my fitflops early and headed north. I was feeling good, although I wasn’t particularly excited. Not sure why. The weather got warmer though and once we crossed 42nd it seemed to go fairly quickly.

I was on/ahead of pace (pre registering & having my packet mailed helped) through Inspiration Point and even the walk from the Lighthouse wasn’t as bad as I was dreading. Yay run training paying off. If it hadn’t been more of a climb to the subway I might have bailed here. I was just tired. At Inspiration Point I paused to change back into my sneakers ahead of the rougher trails in Inwood Hill Park, have a second Uncrustable and take Advil. Quads were in worse shape than feet and I was thinking that if I took Advil while walking it might help (It did – I’m not terribly sore today). By the time I reached the halfway point at Inwood Hill Park for a potty/snack break I’d fallen about ten minutes off pace. If I hadn’t committed to walking at least as far as last time, I probably would have jumped on the train — the 1 train between Inwood Hill Park and the Speedway was a strong pull. I’d decided ahead of this year that I wasn’t going to have sit down breaks, I thought those were my undoing last time. I think part of the reason I was flagging though was I pretty much hadn’t stopped other than for 2-3 minutes since 7:10 AM and it was now 1/1:30. That’s a long time.

I thought at that point that I might have eight more miles in me, which would take me to the point on the Saunter that passes my apartment. Even if I was feeling good, that would be hard to resist. Along the Speedway I once again walked with some folks and that energized me. I was also sneeze powered for a ton of this section. Not sure how much was my allergies and how much was the pollution from the adjacent cars. Almost no cherry blossoms this year which made that section just as desolate as when I first walked it. I pointed out the Brush stairs to a couple of baseball fans and I was tempted to end the walk there again. It wasn’t pain, I just wasn’t loving it. I did enjoy the Horse Fountain, which I was disappointed to miss last time due to pure exhaustion.

When we reached the bottom of Edgecombe – amazing architecture – we learned that we couldn’t head east as planned and instead were to head south on St. Nicholas to 111th Street before walking back east to pick up the Greenway. While I was hoping to get the eight miles from Inwood to home-I had a backup ejection plan at 126th & 2nd Avenue where I could pick up the m15. I had a feeling I was going to take it as I headed over to St. Nicholas.

Almost exactly four years ago (May is my perfect walking month, clearly, from these posts) I said I needed to go back to Hamilton Grange. Yesterday thanks to the St. Nicholas/Edgecombe detour I ended up back there. Unfortunately, both my phone batteries were dead/dying and I didn’t have the stamina to even walk into the park to eke out a photo. I’d been toying with evaluating what I head left when I hit 126th and seeing if I could push on to home, but that’s when I knew I was done. It wasn’t fun anymore. As someone I walked with on the Speedway said, this shouldn’t be an ordeal. As I said last year when I bailed on the Bridge Walk:

There’s no “have to”, especially when something isn’t fun. No winning for martyring.

I think that’s why I’m OK with not finishing the Saunter. I’ve known that the streets don’t interest me as much since 2013, I just need to remember that day of. I have walked the loop. When I turned left on 125th St. I realized just how far west the detour had taken us. Or rather, how much narrower Manhattan is where we should have turned. It was a challenge not to hop on a crosstown bus, but I walked to 2nd where I got off my feet and took in just why my feet were so sore! 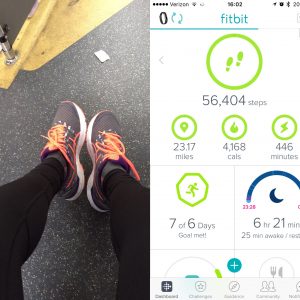 Only just realized the time on making the collage. I’d like to say I’d have walked another eight minutes to have walked 9 hours, But I really don’t think I’d have cared.

Now I want to focus on exploring more of the neighborhoods – especially uptown. I now know how close High Bridge, Coogan’s Bluff and Hamilton Grange are to one another and how relatively easy it is to get there. That’s on my list for this summer.