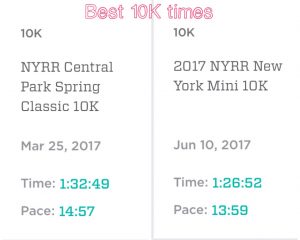 So after I ran last Sunday my hip was decidedly unhappy/cranky and I decided to ease up if I wanted to finish today. On Monday I cross trained on elliptical and recumbent bike after getting my mile in for the Strava challenge. Tuesday I jogged half a mile before moving to a walk on the treadmill since it was, very bizarrely, too cold to walk home. Since Wednesday was #GlobalRunningDay I wanted to try, in part to see if today’s run was doable. I was never going to keep pace with the group in the NYRR member Rundezvous, but I couldn’t even do the ~two mile lower loop so I cut it short up the Central Park Mall and took it easy coming back. Ice helped and on Thursday I had a long session with the studded foam roller that is currently atop the list of inanimate objects I want to marry. Originally thought of doing a test jog Friday but decided a rest day was better – and it seemed to pay off, I woke up feeling good today.

To start off the weekend I went to a panel on the Heritage & Future of Women’s Running, which was amazing. In addition to Jacki Dixon, winner of the inaugural Crazylegs Mini, it featured Debora Warner of Mile High Run Club (one day!), and Jen Ator. One woman in the audience brought her collection of medals from the various Minis – she’d just run the Brooklyn Half for her 500th run. Wow. I’m torn on whether I prefer coed races or not, but I definitely love the anonymity of the large groups vs. small fields.

The #Mini10K course is different to all of the other races I’ve done in Central Park in that it starts up Central Park West and then goes clockwise up west drive, through the Harlem Hills (hate you) and down East Drive and Cat Hill (hate you more) before looping around the bottom and ending at last week’s start line. The pens were along the south side of Central Park, which was somewhat shaded. Wish we’d been in a better position to see the young girls running as it sounded like they had fun.

We crossed the start a little sooner than last week and the waves seemed faster. Running up Central Park West-freshly paved-was a little strange. I was glad to see New York Historical Society and AMNH come up just shy of the one mile mark. My hip and knee were OK and I was feeling like this was going to be doable. The initial uphill in the W 90s wasn’t fun as I knew the dreaded Harlem Hills were coming. You think the worst is over when you start the downhill and then you see the 5K marker lurking over – yes over – Lasker Rink. I officially definitely prefer the 4/5m course, even counter clockwise, as they avoid the Harlem HIlls which are worse than Cat Hill to me due to their length.

I never really recovered my pace after the Harlem Hills but wasn’t stressing it. I was feeling good aside from occasional hellos from my hip and right knee and decided not to push it. I enjoyed some pick ups on the slight down hills and even Cat Hill. I felt miles 3-5 were good and seemed to go quickly even after accidentally taking gatorade at one water station. I was helped along by two sprinklers which were lovely finds.

The 8K marker came just before five miles but I was too tired to do that kind of math. I felt the X meters to go countdown made the sixth mile feel longer. And then someone in all their brilliance put the finish at the top of a hill. But I finished. Medal! Rose! Didn’t get a pink bagel, but I was more than OK with that. Hokey Pokey! 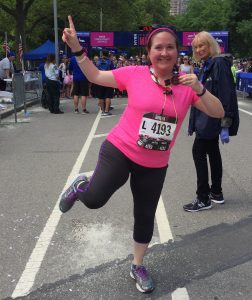 With semi babying the hip I ran almost a full minute slower per mile than last week. It bothered me, but not in the same way the 5K did. My goal for this race at the getgo was to fully train and to do much better than March. Well I didn’t finish the training plan despite devouring his books, and I was slowed by a something between irritation and injury and I beat March by almost five minutes by NYRR time and 5:45 by spreadsheet/watch. I’m calling that a win because I know in better conditions – and slightly cooler weather – I might have done better. Shows me the path forward. 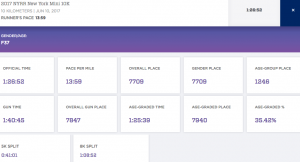 I finished 7,709 of 8,481. You know who finished 7,708 places ahead of me? Mary Keitany! Love that moment when you realize an elite athlete ran the same course on the same day. Holding the right side of the tape? Jacki Marsh, the inaugural winner.

Bottom 10% this week vs. bottom 7% last week when running slower? OK then… I love the motivation of races and group runs, but not sure about the summer heat so we’ll see what plan is there. May try for some last minute on cooler days. Definitely doing a light week again to get hip fully healed so it doesn’t linger. With the 5 miler on Sunday and today’s a Saturday I hit my highest mileage week according to Runkeeper at 14.69.

Definitely going to focus on speed this summer once healed. I’ve seen some fun 5K plans and that may be my goal for summer, though I really do prefer 4-5 miles. 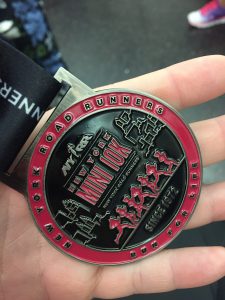