Speedy is my turtle’s name, though it does not fit. Seldom does he move at all, he just likes to sit

Why yes, I am quoting a song from as far as I got in piano lessons on a running/reading/travel blog. What do you mean that doesn’t fit? I’m a turtle and I “sped” today.

I didn’t have any actual workout plans* but I headed to the gym after work because it was too late to run in the Park. When I got there the long time manager told me that it would be closing to the public at the end of September and I was very disappointed. Can’t beat the location or really the price. Swarm tells me I’ve gone 273 times which is just mind blowing (and on top of 300+ at my old gym! I have no idea who this person is that I’ve become in my 30s, but I love her).

I’m going to check out Planet Fitness as there’s one relatively near work and nothing between the train and my apartment. Somehow I doubt these options have gotten any cheaper in the intervening five+ years, and my gym at that time is now an expensive Crunch.I’d briefly toyed around with Planet Fitness earlier this summer when I was going through a mini kick of strength training, but ultimately never went further than opening the tab. 😮 I’m slightly worried about how I’m going to get 50 gym visits in even if I double pay September, but we’ll see.

With that news, I just hopped on the treadmill and decided to see where it took me. I wanted to see how far I could take this new “speed” and to see if I could go distance where my Achilles gave me grief last Sunday. At the end of some 35+ minutes, this was the answer 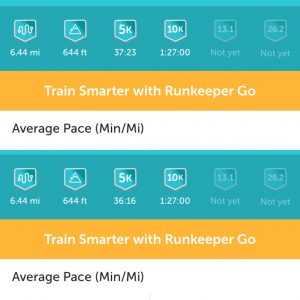 PR! Runkeeper showing PR before and after I logged this workout

The prior one was this gem. Luckily for me today, no post-run pain. These shoes really are magic. 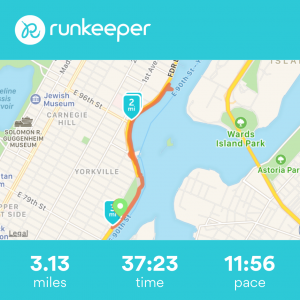 Shoes cameo to reward them for being magic. 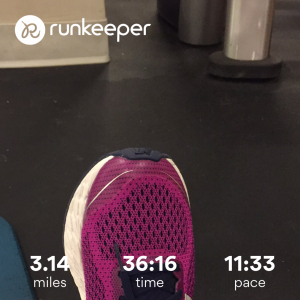 PR! No achilles pain (that really was a random flare, it has been fine since. Maybe weird hills after none for a while?) and it felt good! This was the longest I’ve run in a couple of weeks and it was nice to see how the recent speed worked with running longer. It’s not last week’s flash, but I knew it wouldn’t be. It certainly feels more consistent and natural, so that’s a plus.

I need to get back to the longer runs, but maybe I’ve found a sweet spot balance of the two. (*) I need to put the training log on my phone especially since I’ve registered for NYCRuns’ Squirrel Stampede on 9/24. Pleased to find this discount from a fellow running ambassador (I’m one for US Road Running)  since I missed the early registration date. Last time I ran six miles was July 2 and last time I ran a 10K was June 10. (The mascot for the Stampede has something to say about my blog title there). So looking forward to this and then maybe the Sleepy Hollow one in October since I’m going to miss Grete’s Gallop due to family plans.

Speaking of NYCRuns…thinking of doing the Cocoa Classic. I don’t need a mug, but awful tempting to run a 5K on the course I ran my first to see true progress by year’s end. We’ll see.

On last week’s walk challenge? This morning when I bought the weekly metrocard I still had $8 and change on the card. Step totals over that window?

No trains on Saturday or Sunday, walked home Friday, Monday and Wednesday.

Currently Reading: Living with a SEAL by Jesse Itzer. He and the seal are both insane, but this is a great read.