I can’t remember when Becky Wade’s Run The World  first crossed my radar, but it made a visit to Mt. TBR prior to this reading as when I downloaded it from the library, I was 4% in. I didn’t recall any of it, so re-started and finished it this week. If I had any quality reading time this week I probably would have finished it in two days-it’s just that compelling and readable.

Becky is a 2012 Rice University graduate who took advantage of a Watson Fellowship to travel the world and visit with runners in a number of countries. As I mentioned on the Runners’ Bookshelf, what I loved about this book was that it’s a gap year travelogue at its core.  Although she didn’t officially turn pro until a race in her second country when she won 50 Euro at a race in Ireland, I consider this the first memoir I’ve read by an elite pro. She certainly came across wiser than her age.

Wade’s adventures began in London where she was able to be a spectator for the Olympic Marathon before nearly getting run over when she met her first group of Parkrunners in a Teddington park in which she frequently trained. (I subsequently learned it was the park where Parkrun was born. Also, that sentence is my running TBR in a nutshell: Michael McEwan’s Running the Smoke and Debra Bourne’s parkrun are both stalking me.) In between those extremes she trained with and learned from a number of elite Kenyan runners and had the chance to meet Usain Bolt via one of her flatmates. The kindness and network of strangers was a theme throughout, with Wade spending far less on accommodation than anticipated as someone always seemed to know someone in her next destination.

After England, the other countries that Wade visited were: Ireland, Switzerland, Italy, Ethiopia, Australia, New Zealand, Japan, Sweden and Finland. She wasn’t able to visit Kenya due to the Watson Foundation’s policies with respect to travel advisories.

Each was an interesting stop in its own right but the two I enjoyed the most were Ethiopia and Japan. At the outset of the Ethiopia chapter I thought two months here? and wondered if it would start to drag as I had no particular interest in Ethiopia, but I couldn’t have been more wrong once I met the “Yaya Girls”, with whom she lived and trained. It wasn’t just the runners she met that I enjoyed, her writing really brought the secondary characters such as the woman in the market who watched their bags to life. I enjoyed their interactions with her as much as I did their party at Haile Gebrselassie’s after the Great Ethiopian Run.

Japan intrigued me because, well, everything about that wonderful country does.  The second time I was living there one flatmate was a runner but I never thought much about Japan’s running culture. Wade got the best of both worlds with time spent with expats and locals as she explored a thoroughly foreign world  and foreign running landscapes with concrete far outnumbering trails, especially in Tokyo. And of course, the ekiden. I haven’t run The Way of the Runner but now I feel it joining the the others in glaring at me.

I really didn’t want this book to end. I enjoyed Wade’s travel and running experiences, and watching her grow. Although her volume isn’t anything I can even comprehend, I enjoyed that she had some of the same struggles when approaching the start of a race. It really brought to light the differences between distance and track specialists. On the distance front, the coda of her first marathon really brought the book and lessons she learned over the year together nicely.  I hope she writes again.

On an unrelated note, they’re calling for a major storm tomorrow, the anniversary of Hurricane Sandy. Guess Poland Spring won’t be the only water on the course. Alas, rain means no adoraboo shirt as it’s a cotton tee. So alternate flat me is ready to go if all NYRR systems are go. More on that tomorrow afternoon. 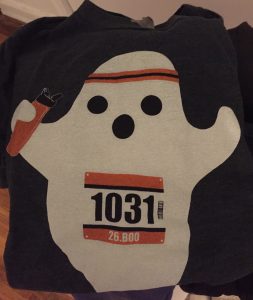 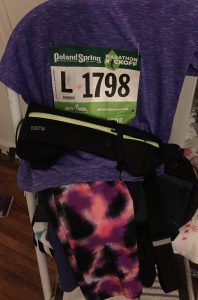 3 thoughts on “Review: Run the World”