don’t ask me why I have TLC’s Waterfalls in my head. I can’t remember the last time I heard it, and it isn’t on my playlists so who knows?!

This is a two week recap due to travel but before I get to the nitty gritty, I GOT MY 5K PR! (Yes, all caps and bold very much needed 🙂 ) Part of a crazy week of cramming runs between conference sessions. More on that later.

The Brooklyn Half is five days away. EEK! I’m not as ready as I wanted to be, but I’m more ready than I was for Lebow, so I think it will be OK. So far forecast looks cool and rainy. Not ideal for post-race beach day, but better than what I feared when we had 80s two weeks ago. I’m simultaneously looking forward to it, glad to be dropping down to shorter distances for June and looking for another half, so go figure on all of that.

For these recaps, joining Wendy and HoHo as I’ve really come to love the folks I’ve met through that linkup

Theme of both weeks? Cramming. Way too much going on and I knew when I signed up for both a conference and the Brooklyn Half at the end of January that it wasn’t ideal, but I’d figure it out.

Low mileage week overall, but it was what I needed and I ran where I could. I was OK with this. 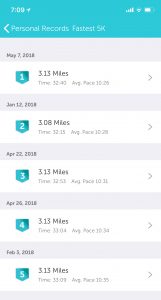 Am I going to regret the lack of any long runs the last two weeks? I’m not sure.  But plan for this week is running today and tomorrow, or today and Wednesday and then off Thursday, Friday ahead of the Half.

Here’s to a good run.

17 thoughts on “Don’t chase waterfalls, PRs are much more fun”