a double race weekend, something I enjoyed but am in no particular hurry to repeat. This week’s recap/mileage is almost entirely the races as, as I suspected when I wasn’t taking photos last Saturday, I was coming down with something. I still managed to run a couple of days, but this was a much needed “off” week. 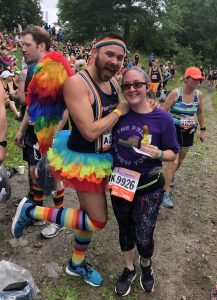 Luckily I started to feel better and when I woke up this morning I was good to go, because I did not want to miss the Front Runners’ festivities.

I knew I wouldn’t like the shirt for the race, so I hit up Amazon and got the one above, which I loved. I lucked out that the rain held off since it was all cotton. In case of the rain, I covered myself with knock off body glide and that combined with China made, not pre-washed t-shirt? Yep, I was purple by race’s end.  Lucky I never needed medical assistance because that would have been interesting. Um, it appears this runner may be a descendant of Grimace or Grape Ape. What’s the treatment there? I’d say lesson learned re: nothing new on race day, but it was really a non issue.

Since the weather was an absolutely perfect 65 and overcast, I ran to the start. There really is no other way other than feet to get to an E. 102nd start. Although I got there just on 8 AM, it was pretty quiet and the corrals were mostly empty. I realized later, it’s a smaller race of about 4,700 runners. Well smaller compared to the size of some in the last few weeks and the capacity of Central Park. The warmup was nice, a celebration of Pride, a push for tolerance and a look back at the history of the events that happen around the race. 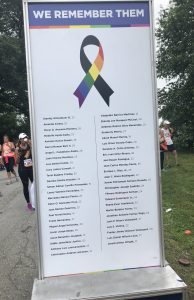 While some of the events that happened in close proximity to the race were ones worth celebrating: New York State legalizing same sex marriage on June 24, 2011; Supreme Court declaring DOMA unconstitutional on June 26, 2013 others weren’t. The Pulse shooting was just two weeks before the 2016 race and the victims are remembered with several placards. There was also a moment of silence before the race’s start for those lost/in our thoughts. Definitely my most poignant NYRR race so far, although overall is still the 9/11 Memorial 5K. 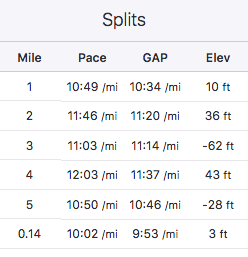 The race itself was pretty unremarkable. The overage was pretty much mile one as there was a lot of weaving around selfie takers. Starting at E. 102nd meant we immediately tackled the Harlem Hills and that was my only moment of Don’t Wanna. It was fleeting and I settled into a rhythm. I was actually pleasantly surprised with my time over Harlem Hills and my recovery in mile five. By Cat Hill I was coughing pretty badly and decided it was smarter to ease up it than run hard, yet I was able to regain pace in the last mile. It felt good.

I knew that I had no shot at a PR Saturday without being totally healthy. It was about three minutes off Italy and ten seconds behind Poland Spring. I’m absolutely fine with that as I ran the best race I was capable of today. Also, neither one of those had the Harlem Hills, although I don’t think the hills were an issue for me in this race as I got them over early.

I love that this race ended with a popsicle: so much more refreshing than bagels. I checked in with Gilbert, then chilled out on the hillside to watch the drawing. I didn’t win, but the people watching is fun. It’s a race with a great history and a great way to kickoff Pride weekend. I went to Stonewall after DOMA went down and hit the March that year or 2014-not sure what’s in the cards for this year as it depends on how I feel after Achilles and the weather. ETA: Nope, didn’t. I napped instead. 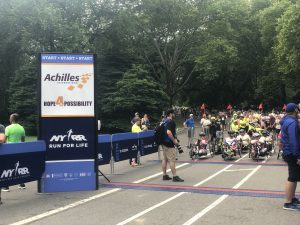 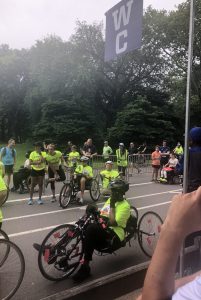 Some of the NYRR hashtags are tongue twisters and/or hard to remember and I find myself peeking down at my bib to get them right. This one was easy and natural: #GoAchilles as it’s something I find myself saying when I see Achilles runners and their Guides out in the Park. It’s so amazing to watch and they have an amazing history. Only just realized the Central Park Jogger was their founding Board Chair and it’s from her book that this race draws its name . As I found out while we waited to start, this run not only honors disabled Achilles runners, but the Achilles Freedom team. #AlwaysConquering. Talk about inspiring. I saw Adam Keys on the course and love the reception he got at the finish. As I said yesterday, I really hope Peter Ciacia’s tradition continues after his retirement because that’s what races should be about too, not just the winners or even the middle of the packers.

It was nice to see the starting line festivities as I ran to the start. Usually approach the corrals from the back as a function of the start location, but while I don’t love an E. 68th St. start, it is nice from that side of things. The warmup run told me just how humid it was and cemented my decision to make this a fun run even though I felt fine after yesterday’s hills. I think the reason I didn’t care for today’s start was two-fold: starting at 68th means Cat HIll is the first thing you tackle and with it being a staggered v. rolling start, you have no warm up. It’s go and hill. Yesterday’s rolling start is part of what made the Harlem Hills manageable. What I liked though was they advised the wheelchair & Freedom Teams divisions to move right if they found themselves slowing on the hill-I think that should be at every race and I’m seriously thinking they need a selfie lane because someone is going to get hurt.

Embracing this as a fun run, I started with an insane cough in mile one coupled – TMI warning, choking on post-nasal drip. Ewww. And then my shoelace came untied. That never happens. Seriously I can think of two runs total where it did. Weird. Mile one dragged but I was pleased to see the sprinklers and I settled into a routine. I loved cheering the Achilles runners and their guides, and ran briefly with Jean Pierre, who I always love to see. He’s such fun. I hit every sprinkler, I drank one or two full cups at each water break and just took it all in. Still finished a sweaty mess thanks to 92% humidity, but I finished. 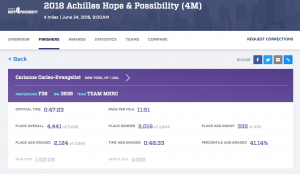 I think the reason slower finishes bothered me was that I saw it as a sign of regression. I’ve finally come to understand that it isn’t – and that running isn’t linear. So sure, this is 4m slower than February, but I’m not 4m slower in my ability. I ran the race that was smart today given the conditions and having run yesterday. Sometimes, runs should just be about getting out there and getting it done. 4 miles is better than zero. 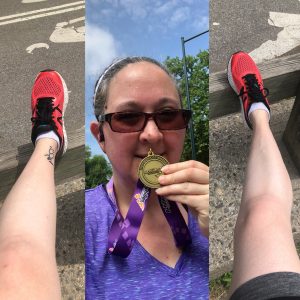 yep, I ran in shorts

Sun came out on my way home. The medal was a pleasant surprise as I didn’t remember reading that in the race details. And yes, I finally ran in shorts. I’d never run outside in shorts before, but I’d done four miles in Arizona so I decided that with this weather, it was time. And I loved it. They didn’t ride at all and it was so comfortable. I might run in shorts for the rest of the summer 😮

Linking up with Wendy and Holly

I’m kind of glad the insane and overly optimistic June is behind me. Here’s what’s on tap, and linking up with Deb’s Race Linkup:

29 thoughts on “Celebrating the work of Front Runners and Achilles”