I don’t consider myself a political person, in fact I generally don’t enjoy discussing politics. Somehow, this has translated into reading three political books this year with one more on #20BooksOfSummer. That said, if you’re looking for a discussion of the 2016 election cycle, or an in-depth look at the Obama presidency, this book isn’t either of those. 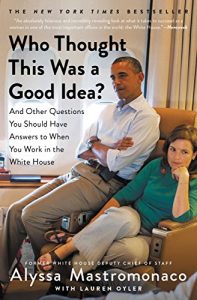 Alyssa Mastromonaco’s Who Thought This Was a Good Idea?

I first spotted Alyssa Mastromonaco’s Who Thought This Was a Good Idea? at the physical Amazon Books store on E. 34th Street last summer. Sometimes you can judge a book by its cover as it seemed funny and intriguing, but I didn’t buy it at the time. I was headed somewhere and didn’t have room to carry a book with me, but I added it to my wishlist. I was happy when it came up on a Kindle Deal of the day in November and jumped on it, after which it sat on my digital Mt. TBR for six months.

It’s not that I suddenly thought I wouldn’t enjoy it; I was just utterly burnt out on anything related to US politics. Then I read Joe Biden’s Promises to Keep and absolutely loved it. His second book, and the book I intended to read, Promise Me Dad, is the fourth one still to come. I followed that up some months later with Beck Dorey-Stein’s From the Corner of the Oval from NetGalley. That was a fun memoir, and I found myself mostly surprised by a woman younger than me working as a stenographer during the years of the Obama administration. I truly thought that was a dead profession. Spurred on by my enjoyment of those two, I put this on #20Books figuring that was as good an incentive as any to push it to the top of Mt. TBR. When I finished Rise Up! I wasn’t sure what I was in the mood for, and this finally seemed as intriguing as when I first saw it. I proceeded to finish it in four days, and would have been less given more reading time. ETA September 8: followed this up with Dan Pfeiffer’s book, which his a wonderful complement to this book.

While on the surface this is the memoirs of a woman working on the Kerry and Obama campaigns, as well as in Obama’s administration, and attaining high level positions in both while under 35, it’s much more than that. There are a lot of life lessons here for professional women working in any field. Among my favorites:

What wasn’t as prevalent in Dorey-Stein’s book that I enjoyed reading about in Mastromonaco’s was the “softer” side of Obama and the administration:

And of course where the book itself drew its title from, Obama asking this of his staff when they had a plan he wasn’t sure he was on board with.

There’s also the side you don’t know; such as:

All in all a really enjoying book that read more like a novel than a non-fiction book of the self-help/memoir variety. This was way less of a political book than I expected, and I’d actually say it’s of interest to most professional women regardless of your political leanings unless you’re someone who just cannot tolerate Obama at all. In the early chapters I didn’t care for Mastromonaco as much and found her an underwhelming narrator, until I better realized the purpose of this book: it wasn’t a memoir of working in the White House, it was a memoir of personal and professional growth while working there. And then I really began to click with her.

My only real struggle with the book was the author’s choice to use a lot of nicknames, which didn’t appear to be out of a need for anonymization.  She mentioned a lot of friends, colleagues and others she met in the course of her job, and it was sometimes hard to remember whether Moose, Shrummie and Possum were family members, pets or colleagues.

3 thoughts on “Review: Alyssa Mastromonaco’s Who Thought This Was a Good Idea?”