This was the first running week that felt normal-ish since injury. Baby steps forward.

Before I get to this week, I had a very pleasant surprise in my inbox Friday morning: I’ve been selected a Skirt Sports Ambassador! Did not see that coming at all as my social media activity is typically way too low for any ambassadorship.  But pleased to be part of a brand I’ve really come to love wearing in the last few months. My code if you don’t have your own to shop with: 47CarSSA

The most exciting thing on the running front this was that I wasn’t dreading runs. Not that I didn’t want to run the last couple of months-I did-but I was dreading the ankle/Achilles pain. For the first week since early December I have almost no pain at all. I have faced the reality that there isn’t going to be a long run in this training cycle, but NYC Half plan was always to have fun, so I’m not too stressed. I’m getting healthy for training.

One thing I’ve known but truly realized throughout the course of PT is how weak my core is. First step is this manageable 14 day plank challenge. One day, when I remember to pull it up at the gym.

The nuttiness of this week, which was somewhat behind Tuesday’s post is clothes volume. I swear they multiply. Last week I went three weeks without laundry, although that was aided by some laundry when down in Florida. This week I had to drop off the laundry with just one week. Hadn’t put away the three week load, and I only ran out of pajama bottoms. I look at my winter closet and probably a third to a half of my shirts are still turned the wrong way on the hanger, aka I haven’t worn them. I just don’t do solids much any more. I really, really need to purge. Poshmark here I come.

Other posts this week: yes, this was a blogging miracle week!

Linking up for the first time with #Riots and the new incarnation of the Weekly Wrap, the Weekly Run Down with Deborah and Kim. 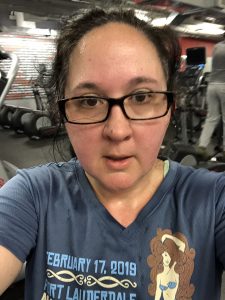 sweatin’ to the oldies? No bad pop & country 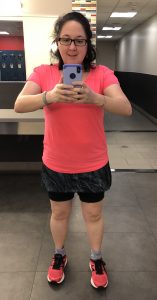 matchy matchy! For once in my life 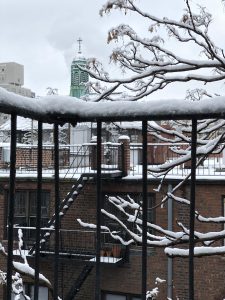 Race Calendar for 2019: finally starting to plug in some of this as my spring/summer calendar settles in. I am not going overboard like I did last June so probably won’t do Achilles.

It’s weird. I’m way less focused on steps especially as I’ve made sure to take some rest days in healing the Achilles, but I still end up stressing over steps. Luckily I just barely squeaked out a better month than February 2018.

I am off pace, but as I mentioned I’m feeling healthier & stronger