Original post title: Trying not to run on caffeine and sugar.

That was before this became a pointless weekly run down due to a wonderfully crazy work week. My office has our annual gala on Monday and I wear a lot of hats for that. On the plus side, I made relatively good decisions for real food and  not venti sugar bombs and as a result, I slept except for some Monday night insomnia.  I’ll touch on what little running actually happened after my Ted Corbitt recap, but first…

What I said last week about only two things for Black Friday was true, and then Cyber Monday hit. Still on the running theme, I got:

At one point, I wasn’t going to run Ted. I wasn’t sure how I’d feel a month out from the marathon – the rest one day for every mile run adage can be confusing for a first time marathoner. And then as I got further into training and wasn’t trashed after 20 miles, I realized I’d be able to run 15K just fine and I signed up.

Ted is one of my favorite races (2017, 2018 recaps) and running it in his centennial year just seemed right. The giveaway was a pair of gloves, which I like. As someone who is forever losing her gloves, can never have too many. 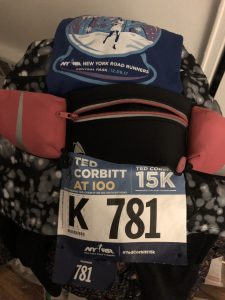 I’m not a huge weather stalker – but found myself peering at it this week. It looked like it was going to be a downright balmy 20/30s. Sold. I didn’t get a good Flat Cari as I’m still using my stepstool as a staging post. That’s the 2017 shirt, which remains one of my favorites. It’s a vivid blue. I layered the NYC Half long-sleeve tee under it. Bottoms were my favorite LBCs, Black Winterland. It was so nice not to need all the layers. I was partially still marathon Cari with my Run NYC hat and marathon gloves.

I left between 7:45 and 8 to run to the start. I saw a message on NYRR’s Facebook Friday night that mentioned the new start. I’m glad I saw that otherwise I totally would have run to 102. This was somewhere I’ve never seen an NYRR race start so there was some zig zagging to find the start line. While I don’t like rushing-and getting a bit of pedestrian rage – it had the added benefit of not having to wait at the start and not cooling down.

Just shy of mile two, I was lapped by the eventual winner who was passing mile seven. A fellow runner and I just looked at one another and said WOW. .There really is no other reaction possible. I feel badly for the local runners who might otherwise have won without a sponsored athlete going sub 5 minute miles.

Me? I finished ahead of 400, not 4000 others. I had so much fun. I really like the new course and one amazing benefit of marathon training is that Cat Hill or the first round of Three Sisters didn’t faze me. Second set did, but that was more tired legs 11 miles in.

I didn’t look at my prior times before this week, so I really had no idea how I was running vs. prior years. I need to find the switch from long run to race, but this wasn’t really the run to figure it out. That I had enough in the tank to kick it up a notch in the final mile means I could have gone faster, but PR chasing wasn’t a goal. 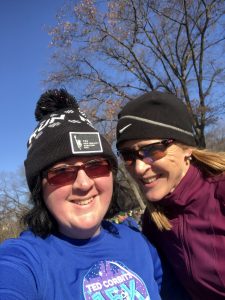 As I turned onto the 72nd St. transverse for the last tenth or so, I hear someone calling me and see this maroon blur streak in. It was so good to see Amy, one of the Rogue coaches coming off their Saturday run. Was glad to find her after the finish for a hug and hello. It was short as we were both freezing when we stopped moving.

It’s pretty safe to say that Ted is one of my favorites that I’ll return to every December. It’s a nice year-end since I’ve never done the Midnight Run. I was also reminded of why I truly love the half marathon distance and I’m excited to properly train for one. 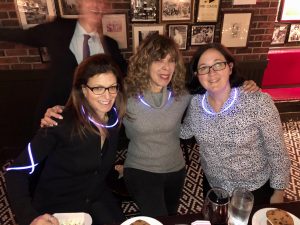 two of my favorite runners