more to come on Bermuda overall in, hopefully, a #TravelTuesday post. In the mean time, my thoughts on an amazing racecation. First of all, major love and shout out to the entire Zooma and OnPace race teams. They and their partners put on a fabulous inaugural Bermuda race and I can’t wait to return to the island or do another one of their races. So many cities, so little time. 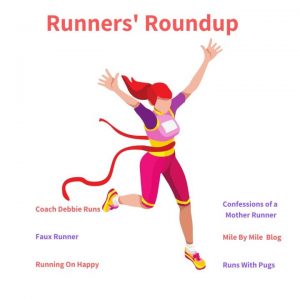 Linking up with Debbie, Deborah, Rachel, Lisa, Jen and Smitha for the new Wednesday “Runners’ Roundup” to discuss the Zooma Bermuda challenge. Apologies in advance for an insanely long recap. I enjoyed this weekend almost as much as I did my first Half Marathon.

The weekend in a nutshell 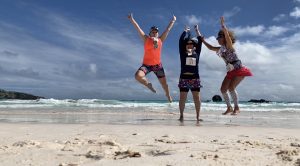 In no particular order this weekend involved:

The results of our hard work:

As US-based runners, we received our swag bags before we flew, which was great. This included a map of Bermuda,  the gorgeous tanks in the second photo here and a super soft quarter zip. Both fit surprisingly well, and I actually wore the tank!

After a day + exploring the island on our own and with some other early arrivals, Zooma Bermuda officially kicked off with a welcome reception at the Fairmont Southampton, our wonderful host hotel. This also served as the Expo during which we could pick up our bibs, wrist bands for transportation and activities and other purchased items. As someone who wishes races were generally more sustainable and generated less waste, I loved that the bib was the same for Saturday and Sunday’s races.

Since it was a relatively small race and the Expo was in a hotel ballroom at a fixed time, we had the opportunity to meet other runners and the On Pace team. I have run with pacers before, but with a great ratio of pacers to runners we had the opportunity to truly engage with the pacers. I really appreciated the opportunity to talk with them about their plans and felt they really listened to my goals for the race. As someone who doesn’t always do well with new people, it was also helpful to meet “my” pacer before the morning of the race.

Besides races, Zooma organized some optional field trips for those of us visiting the island. I was excited by Saturday’s to the Crystal Caves as they appeared to be absolutely stunning. They did not disappoint.  I had a particular chuckle as the shuttle we used to go to and from operated under the name “Bermuda Triangle Tours”. Life’s too short not to have a sense of humor.  If/when I go back to Bermuda, I’d probably stay a little more central – there was a lot of travel time between Hamilton, the caves and the airport that I’d prefer to eliminate in a shorter stay.

We also hit up the iconic Swizzle Inn, and while I stayed away from a Dark and Stormy or Rum Swizzle ahead of a race, I definitely soaked up the atmosphere. The real up side of being in Bermuda in the off season was the sites & restaurants had no issue accommodating the large groups.  In addition, we were able to get 20% off entrees for our closing dinner at Henry VIII. If I sprout fins and swim away from my blog it’s because of all the delicious fish I ate at the weekend. Wahoo, fish and chips and conch fritters, oh my! 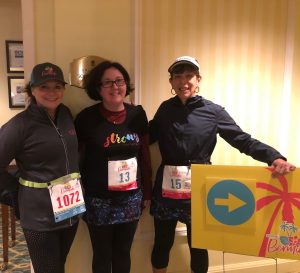 nice signage to mark the route! 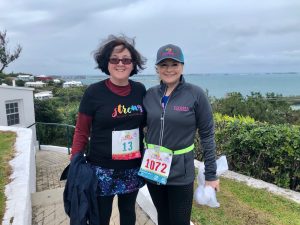 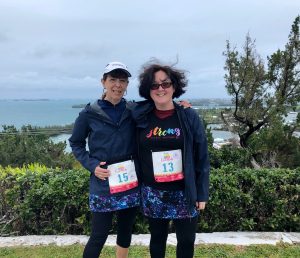 The length of this race changed a couple of times due to road conditions. As the day dawned and remained dark and stormy – a tribute, no doubt, to one of the sponsors and welcome drinks (!!) it solidified our plans to walk the run rather than risk Sunday’s run.

Dressing for high 50s/low 60s with wind and rain is a challenge coming out of Northeast winter. I made a gametime decision to put on a long sleeve tech shirt under the Strong Fricken’ Women tee, which I thought particularly appropriate for this women-focused series. I was very glad I did so as wet tee shirt is never a good feeling. This was semi-planned twinning as Darlene wore this one day and I loved the pattern and told her I was going to be a copycat. This was the first chance since that we both planned to wear capris, so it had to happen.

An unexpected find during the Zooma weekend was all the Skirt. One icebreaker on Friday’s field trip to Hamilton was someone wearing the same pattern as Darlene, and another woman told us how we could find at the Expo based on which Skirt she’d be wearing.

I had a poncho, but didn’t bother as the rain wasn’t particularly heavy but mostly annoying. The route was nice as the road wound down from Gibbs Lighthouse to Horseshoe Bay, and I’m sure would have been even more scenic on a clear day. For some reason I wore and turned on the Garmin, I’m sure it will soon be touting a new 1.5 mile race record. LOL. 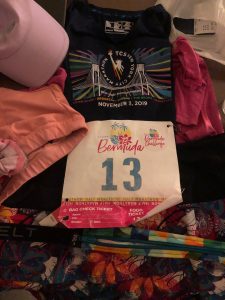 Long sleeves was the wrong choice for 60s, but a few weeks ago when I accepted reality that this Half was going to be a challenge I’d stubbornly decided (Yes, I’m stubborn, this is a theme) I was going to wear my NYC Marathon shirt to remind me of what I had done just a few months ago. I survived, I did not melt. 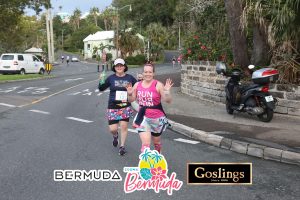 On the go! We ran a chunk of the race together and she ultimately PRed

aka the reason we were all in Bermuda. There were some 200 runners in all, with us split relatively evenly between the Half Marathon and the 10K. As I mentioned last week, I contemplated dropping to the 10K as a result of my complete lack of training due to injury. Once I found out there was a 3.5 hour cut off, I had a feeling I could do it and decided to go for it. This was further confirmed when I met Esther from On Pace at the pool early in the week and she confirmed it wasn’t a hard limit and that no one would be left behind.

We boarded the race shuttles a a little before six, bringing us to the start area in Barr Park in plenty of time to enjoy a beautiful sunrise and prepare. While I think we could have arrived a little later, I totally understand the cushion for an inaugural race especially given the construction and narrow roads in Hamilton. Just after 7:30 we were off.

Did I mention narrow roads and hills? Someone told us that while Bermuda is only 20 square miles it has more than 300 miles of roads. I’d believe that, and what the airport shuttle driver told us that he’d point out a straight road if we ever saw one. This was one hell of a course. My plan, such as I had one, was to power walk the hills and when my endurance gave out. This started in earnest at mile four when we hit the longest & steepest uphill simultaneously. Bermuda is the anti-flat. This was the hardest, but also the most scenic half marathon I’d ever run. If I had to give up a scenic view for one less hill – wow. That would be an impossible choice.

I chatted to both the 2:45 and 3:00 pacers for their plans and both were doing 3:1 intervals walking the hills. I started with 2:45 and kept them in sight for a few miles, but I knew that wasn’t realistic. I didn’t do intervals so much as run when I could, walk when I needed to. Somewhere around mile eight or nine my goal shifted from not finishing with the sweeper to coming in below three hours. I’d stayed with/ahead of them for so long I thought that was a reasonable goal even as I expected to tire in the final quarter.

All the OnPace pacers were awesome, but Mandi and Marissa get a special shout out for pushing us through the finish.  At mile nine-ten ish I felt strong enough to drop the intervals and gained on them a bit, which was good as it provided a cushion when I power walked much of mile eleven. By this point I was flat out determined to break three.  When our watches neared thirteen, Mandi and Marissa told us that the finish was just around the corner and to go as it was too early for them to finish as pacers. We took off and I can’t wait to see my finish photos as I was probably a smiling fool. I had about three glasses of seltzer from the finish line festival before heading back up to the finish to watch the last runner come through. She was surrounded by Pacers who had finished their assignments and went back out to bring her in. No one finishes alone was an awesome motto and I can’t wait to do another race where On Pace are the pacers.

My time? It was the slowest of my eight Halfs. Do I care? Not one iota. The goal for this one was finishing, ideally smiling. DONE.

I am an adult.. I did not stay up all night until a 6a shuttle figuring What the hell, I’ll sleep on the plane.  I was too tired from waking early and the half and went to bed around nine after a wonderful closing dinner at Henry VIII. This is 40.

While I can’t go back to Bermuda next year as I have an entry for Fort Lauderdale due to deferring this year, I’d do another Zooma race in a heartbeat if the destination was somewhere I wanted to run. It was well supported, the communication was great, the SWAG was good (the medals were GORGEOUS) and the location couldn’t have been better. Amelia Island might be too warm for my liking in October, but Cape Cod is tempting me.