Facebook memories were hard to look at last weekend and throughout the week. Staying home is the best way to control COVID 19 spread, but I miss travel. I even miss traveling around the city and exploring new neighborhoods. NYC enters Phase 1 on June 8, but things are going to continue to be different for a very long time.

There’s a lot of awful in the world right now, and we all know it. It’s on the news, in our social media feeds and everywhere else, including directly in many’s day to day lives. I’m opting not to get into it here. Stay safe and healthy everyone. Take care of each other. 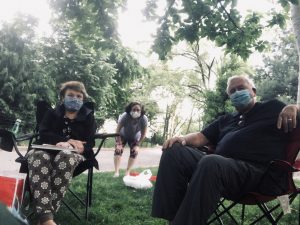 For me personally, this week was better than a number of prior ones. The above is a huge part of that because I was finally able to see Mom & Bob in person. I’m so grateful for FT, Zoom, etc. but none of them replace in person visits. After a failed attempt at finding a halfway meeting spot, they drove in and we had a lovely picnic dinner in the park. It was more than a little weird to be handling a photo book they made while wearing gloves, but these are some of the steps we need to take to stay healthy, so be it. 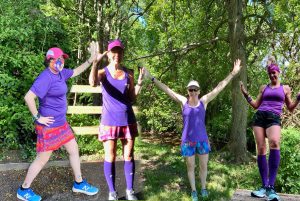 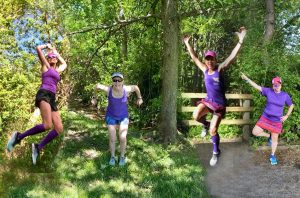 jumpies with a side of disco flamingo

I also got to be silly. Silly has been in short supply the last few months. But when Darlene mentioned that Kim & Deb won entries to the virtual race that Elizabeth and I were also doing, I thought what a great chance to just be silly. Thanks to similar weather in Virginia, NYC, Albany and Iowa and Deb’s husband’s amazing photo editing skills, we got to high five each other and be silly runners.

As I’ve said many times, running has brought some of the best people into my life. I look forward to the day Darlene, Elizabeth and I can run together again and meeting Deb and Kim in the future. 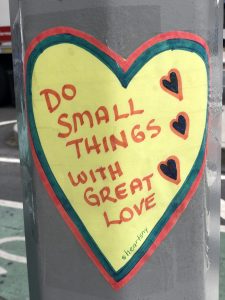 During a couple of morning walks I discovered @HeartsNY‘s handiwork on the Upper East Side. Such bright spots in this dark world. I feel a scavenger hunt coming on to find more of these. These, rainbows, rock art. I really love how many people are trying to find some light.

Running? Running was good. On Saturday I implemented my plan to walk to and from Central Park with the run sandwiched in the middle (OK, run/walk) and no pain. Tight hip but no actual pain. Bodies are so weird, but I’ll take this progress. I ran almost double April’s miles and believe I’m finally maybe turning the corner on this stupid IT Band.

I actually found out that my PT clinic is re-opening. As much as I’ve missed formal PT, I’m not sure I’m going back just yet. Want to give them time to get into a routine with all the new PPE and sanitizing. That said, I think medical facilities are among the best places to be given the hygiene standards they implemented after the AIDS crisis. By healthcare I of course mean well visits, not places with other sick patients. Spear is hosting two virtual running events, which I will try to join, as they’re specifically about hips and glutes. 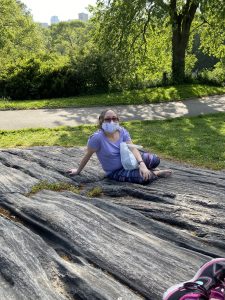 lizard on a rock 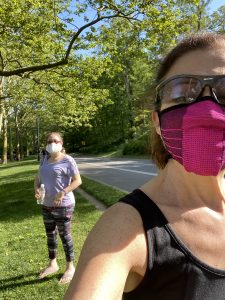 about to dance to Mr. Roboto? 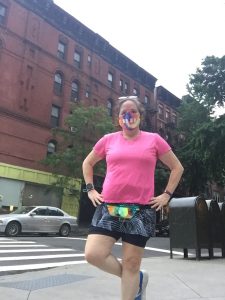 Hi, summer. NIce to see you 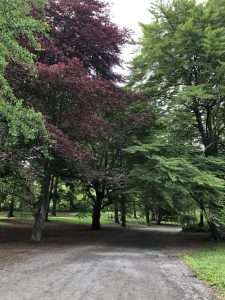 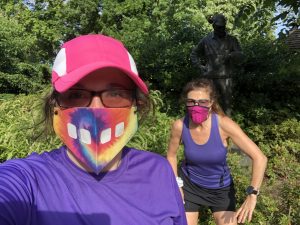 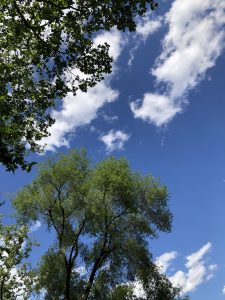 my afternoon view while reading 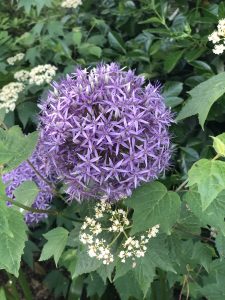 22 thoughts on “is there summer in Quarantime?”