do you make up words? It sometimes drives me crazy — what is the ask? — when we have the perfectly good word “question”, but other times I’m full-on verbing/nouning. When I was thinking of the name for my Facebook album for the post, leafcation came to me as the perfect word, and so it was hatched.

I hope this is helpful for anyone planning an autumn roadtrip. While avoiding planes makes sense this year, upstate & western New York is just much easier to explore via car.

I had no plans on a road trip until two weeks ago Tuesday when my brother confirmed we’d have a socially distant something, somewhere for my nephew (newly six). I also realized that was a long weekend when Budget offered an extra day on my rental at no cost and… why the hell not. Once my brother confirmed we’d do the get together at their place in Albany, I began to sketch out a plan. I knew that this trip had two goals aside from seeing family & COVID safety (both givens): enjoy fall colors and be active. My road-trip style of travel typically left me with just enough time for a treadmill run in the hotel gym, and I didn’t want that for a number of reasons. COVID safety was a concern, of course, but really I just wanted to explore the areas I was staying. 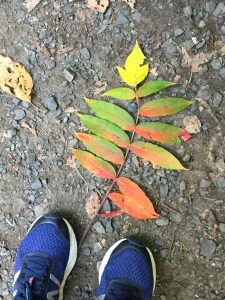 just a taste of fall

Stop 1 doesn’t really count for this leafcation for two reasons: it was overnight at mom & Bob’s and fall colors really hadn’t begun yet. That said, for those spending time in fall in the lower Hudson Valley, there are some great runs: 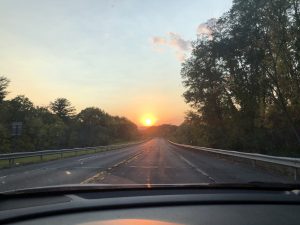 After spending a couple of hours in Albany, I headed west to my first stop in Utica. There was nothing special about Utica as a stop, but I just knew I couldn’t make it to the Rochester area as I don’t like driving after dark. My overnight was at the Delta Hotel downtown and I don’t have much to add about it as it was just a place to sleep. It was quiet, clean and easy to access off the Thruway, which was all I needed. 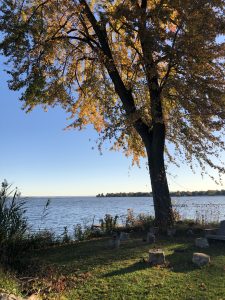 One of the best decisions I made on this trip was to stay off the Thruway when possible. I do not like driving with a ton of trucks and firmly believe that you see very little of interest on an interstate. This decision was immediately correct as I pottered through the small towns in the western Adirondacks/eastern Finger Lakes. CarPlay showed a body of water to my right and I turned down a street to find this beautiful vista in the map dot known as Lakeport, New York. Oneida Lake is the largest lake entirely within New York and was a great place to stretch my legs. 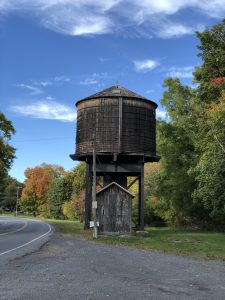 what a welcoming parking lot/trailhead 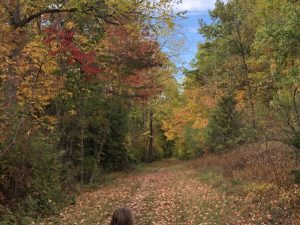 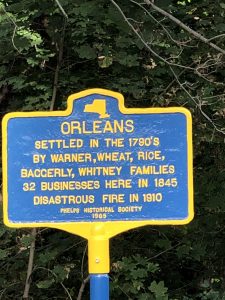 with a side of some history

After visiting with my college roommate and her family, we decided to take a walk with the kids. They had been exploring portions of Ontario Pathways throughout quarantime and I was eager to see some of it in person. We chose this section at the Orleans trailhead as it was a segment they hadn’t yet done. Like the Old Erie Path and many other multi-use trails, this is a former rail line and when I read the distance I couldn’t help but think it would make a great, small marathon. There hasn’t been anywhere near enough water this summer, but I would love to see more of this trail including the Winnie the Pooh trail and Double Drop Falls.

I usually stay with friends in this area so don’t have much on where to stay, especially with the Inn on the Lake gone, but there are a number of hotels, and bed & breakfasts in the Canandaigua, Victor areas and of course Rochester itself. 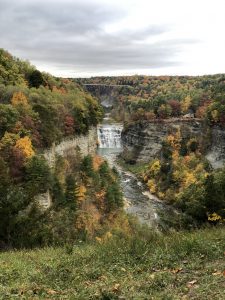 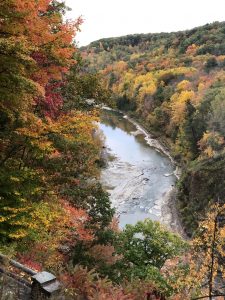 first view of the colors and the Genesee River 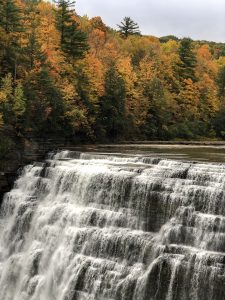 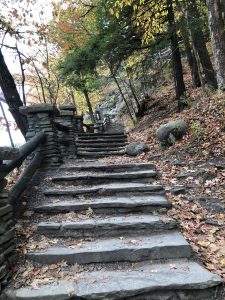 why this run became a hike

did someone say waterfalls?

I remembered Letchworth State Park from a trip as a kid and a college floor program, but hadn’t been back in 20 years. With the fall colors, holiday weekend and COVID-19 capacity restrictions, I knew going early was my best chance at getting into the park, especially the most scenic portions.  I knew from some research that there were a number of trails accessible in the park, but it wasn’t always easy to sync those up with the GPS directions and the park entrance I used.

So I decided to wing it. I knew it was ~ a mile and a half from the first parking lot to Inspiration Point and I decided to go for that as I knew I just wanted to explore the Falls. The Upper and Middle Falls were stunning even with the lack of water and if the leaves weren’t at peak, well I don’t know what peak is. I quickly realized that this was going to be more of a run some/climb some trip, and that was fine on a cool, damp morning. There were some larger tour groups near the Inn and the museum, but overall the park was very quiet. I really appreciated that – not for social distancing reasons, but my pet peeve in parks is people yacking into their phones. I’d love to come back and explore Letchworth at greater length. 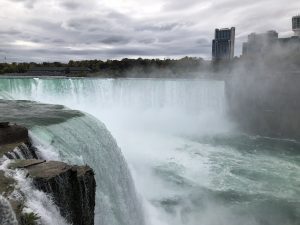 chase all the waterfalls 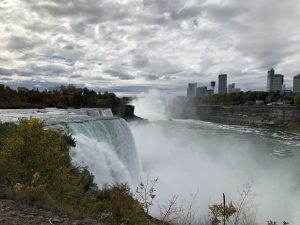 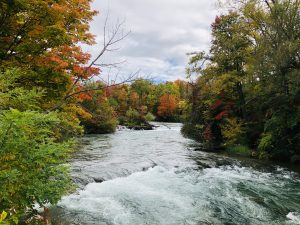 I have a strange memory from the childhood road trip to Western New York of asking mom & Dad how I’d know the difference between Letchworth’s falls and Niagara’s when we got the film developed.  Oh the innocence of the internet not giving you a pre-existing image of a place! This is why I had limited time at Letchworth – on a whim within this road trip whim I decided to see if I could make Niagara Falls. It was only about two hours from Letchworth, and it was worth every minute.

I parked in one of the small lots right when you enter the State Park (lower right on this PDF) and had a thought of running Goat Island but a) needed to use the restroom and b) it was a super warm day and I was in capris. I could have done a camp/soccer style car change into a Skirt, as I’d done to switch from a long-sleeve tee to a short-sleeve one, but was not that motivated. I settled for meandering around between the American Falls and Canadian Falls and racked up an impressive amount of steps. Plus it was nice to just sit and people / waterfalls watch. I’m sure Goat Island and the Park in general could be a great race course, but these views weren’t one to run past.

There’s a valid argument that the view from the Canadian side is better, but can’t get any closer than the American side. Had the border been open (weirdest sight ever) I’d have no doubt done that, but I don’t feel like I missed anything. I briefly considered doing Cave of the Winds, but I didn’t see the appeal in getting utterly drenched.

Like I said, absolutely worth the detour. What I didn’t do because I wanted to break up the drive on the last day, but what I’d recommend is staying in Niagara Falls or Buffalo so you have more of the day and/or sunrise at the Falls 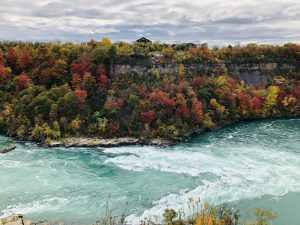 I left a little after three so as not to drive too long after dark, but before I left Niagara, I wanted to see the Whirlpool, which was something I vividly remembered as a kid. This was one area that I truly wished I had more time to hike because it was absolutely stunning and there are so many trails. 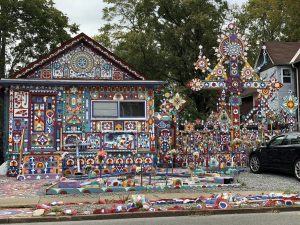 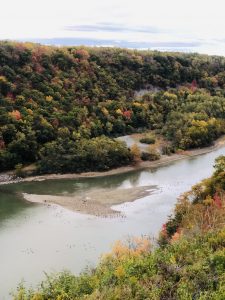 The drive was most definitely not boring as I was treated to a few of the Prophet Isaiah’s house on the way out of Niagara Falls and a beautiful dusk at Mt. Morris Dam as I dipped back into Letchworth on my way southeast. Yes, it would have made MUCH more sense to save Letchworth for when I doubled back, but part of me wanted to see this trip the way I remembered first experiencing the waterfalls, and I was worried about Letchworth being at capacity. 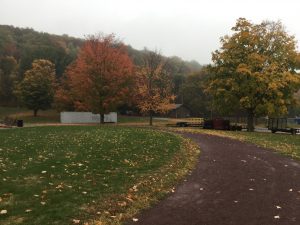 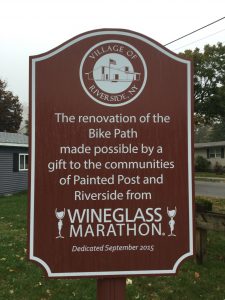 never had to worry about a place to run here

I didn’t pick Corning out of any great desire to see the city – in fact I skipped everything but Wegman’s – but rather I was looking for somewhere that would make Tuesday’s drive back to the city more manageable. I figured that would either be Corning, Elmira or Binghamton.  Thank you lots of experience on the southern tier. Corning hotels worked out better, and as I got tired/stressed my night vision, I was glad I made the choice furthest west. 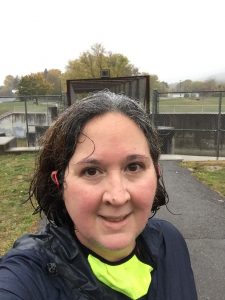 When I checked in to the Fairfield Inn, I asked about the best / closest place to run and was pointed toward the Painted Post Trail, which looked great.  When I woke, the weather did not look so great, but I wanted to get out there since I hadn’t properly run Monday and I knew it would make the drive home much more pleasant.

The trail was just as easy to find as the hotel staff made it sound and I extended the trail slightly to incorporate Craig Park and the school trail at the far end. I’m pretty sure it’s my first time on a school trail in  20+ years, and the leaves made it fun. Actually, so did the perfect running temperatures as the rain eased up to a drizzle.

It was fun to run a portion of the Wineglass route, and that race is officially on my bucket list for 2022 or 2023. I thought Corning was much harder to get to than it actually is. And I look forward to seeing Ithaca and Watkins Glen because this trip definitely reminded me how much I love waterfalls. Stunning natural beauty.

I was glad for the run since I barely hit step goal even including the run and the walk from rental car drop off. Overall though, steps were easy to come by on this trip as all of the areas were so much fun to explore. It’s way more fun to see the area you’re overnighting in, even if my road trip over nights aren’t typically that scenic.  This trip can’t be as adhoc in “normal” years as the hotels would be way more likely to be booked for college’s parent weekends and/or leaf peepers. We take the good where we can get it this year.

This was going to be wholly a Travel Tuesday, and then I saw the Tuesday Topics was destination running, so linking up with Zenaida and Kim for some run fun.