somehow, my first ever Halloween run. I’d planned to go full Halloween when I ran the Poland Spring 5M in 2017, but it was pouring and that’s the only time I’ve raced this weekend. 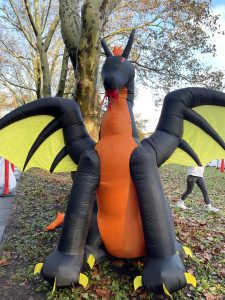 here there be dragons

Linking up with Coach Debbie Runs, Confessions of a Mother Runner, Mile by Mile, Runs with Pugs, and Laura Norris Running for the #RunnersRoundup to share my thoughts on running Governors Island a second time and Halloween 2021 shenanigans. 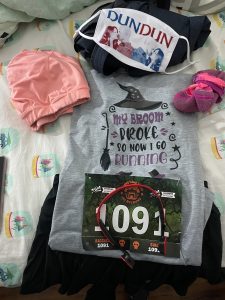 When I woke to rain still falling, I changed the mask and the shoes. I didn’t want my pretty new NYC Brooks to get wet/muddy, and I wasn’t sure about a wet cotton mask – for comfort more than COVID. Otherwise the outfit was good, and I’m hoping for some finish line pics to fully get my witchiness. It was unseasonably humid so although I grabbed a long sleeve tee for the ferry, I was fine in just the windbreaker. 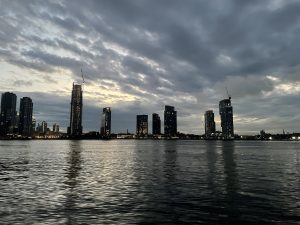 Yes, ferry hopping. Governors Island is a short ferry ride from lower Manhattan, but the easiest way to get to that ferry from the Upper East Side is NYC Ferry to Pier 11, which I did as the eastern skies cleared somewhat. I actually almost went to the bus when it was raining, but when I walked out it had stopped. I was glad-less so for the race and more the ride since the ferry is just so much faster.

In a change from July due to increased vaccination/fewer COVID protocols, there were meant to be two ferries to Governors Island, but when I arrived they were just filling them and going back and forth. It meant I had more time to kill on GI, but that was fine with me since it’s more sheltered from the wind than standing along the East River.  They had good music and it was really fun to people/costume watch.

The 5K went off at 8:30 and it was watching that where I got some of the best costume shots. The dragon above was also “guarding” the start and NYCRuns in their largest races since pre-COVID were back to their start line fun with excellent music. Personal favorites were Time Warp and Sympathy for the Devil. If I run this again, I’m definitely upping my costume game. I saw a lot of folks and thought oh I could run in that! although just as many um no wow, I’d fall on my face. 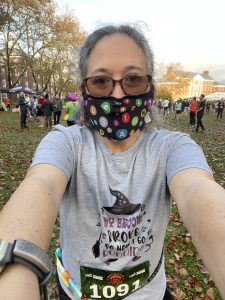 Before too long, it was time to check bags (love small races) and head toward the corrals. Never mind July, I don’t remember corrals in Riverside Park for the Penguin. But they were well marked and quickly collapsed to move up toward the start. Gun/chip time were 1m9s different, but it really didn’t feel like it took me that long to cross the start. (Almost typed finish. LOL. Definitely felt longer than that!)

There’s not a ton to say about the course, it was exactly the same as the Firecracker 10K. There were definitely some moments of head/cross winds with the storm just off east, but nothing that really impacted pace. When we passed Soisson’s Landing about half a mile into it, the “pack” broke up and I was glad to be able to lose the mask. Alas I dropped it into a puddle and was very grateful to race staff with an extra for the ferry home sine wet mask is… yuck. Lovely views of Lady Liberty and the island’s Halloween decorations.

Once I got my Booster last week, I wasn’t sure what this race was going to be like, but I felt fine aside from poor sleep. Not pre-race poor sleep, but I did have some pre-race jitters, mainly did I want to run the island twice? What would it be like without my friend “pacing” me (she’s running NYC next weekend). But once we were off, I was fine. There were about ten of us in a loose pack and who was ahead/behind depended on whether folks stopped for water, photos or other adjustments. I was lapped by the winner at about the 2.75 mile mark, and lapped a pair of 5K walkers, which I felt was a bit of the running circle of life.

Remarkably consistent race for me. Mile 1/4 make sense: getting across the start and waiting for the pack to thin, and the turns are more severe than they look. At mile five I knew I had some left in the tank and picked it up. Could I have done so earlier? Probably. But I wasn’t particularly racing this, nor was I taking it as a training run. (More on the weird training for Malibu on Friday). Either way, I was happy with this especially when I realized I’d come in under 1:12:00. Official is 1:11:15. It’s not a PR, and even recently the 2021 Mini was faster, but this felt good and strong.  I’m ready for Malibu. 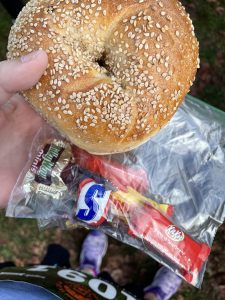 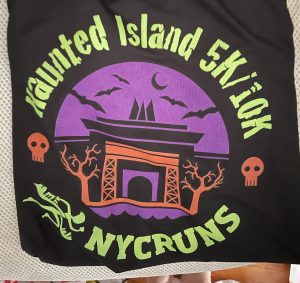 and a nice race shirt

I’m not usually one for bagels post race, I’m too thirsty. But these were good and I was hungry. Was also happy to trick or treat, although all but the red starburst remains uneaten. While I would have needed to check a bag anyway for my windbreaker and long sleeved tee, my one quibble about NYCRUNS is that they mail the bibs but not the shirts. They’re obviously asking folks not to check bags for security/covid interaction, but unless you arrive in a disposable shirt, the shirt necessitates bag check. In July we pooled our race shirts into one bag check. But not a huge issue so it’s a quibble and not a complaint.

There was about half an hour from when I finished until the next ferry, which was plenty of time to get my bag and mosey back from Nolan Park (5m walk) to the ferry. Last month they announced that Governors Island will now be open year-round, which is wonderful for many reasons. While it will be beyond nippy in the winter, I’d love more off season GI races. As I said somewhere, it’s rapidly becoming one of my favorite NYC “destination races”, and there’s something about a smaller race field that’s just fun. Shirt looks like it will fit well and I don’t have too many black ones: Cinco de Mayo and the Manhattan 7, I think.

Looking forward to these four and then I’ll start thinking about the rest of 2022.

Have you done any local “destination” races? I usually just do Central Park, but this is fun travel.

Any forts in your races?