because my weekly run down can be summed up as: I ran and saw amazing bloggers (more on that in a post soon) on my ~ 1300 mile drive, I’m instead linking up with Kim and Deborah for this race recap of my ninth? half marathon. I so love this distance. Also, the race was amazing and I’m still bouncing a week later. 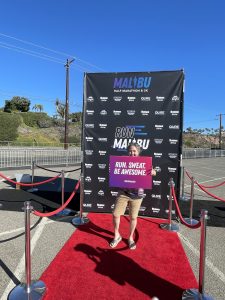 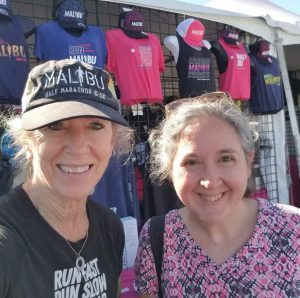 Step one for having an excellent race: Have your expo at the beach. Not even my other beach Halfs have accomplished that. But really, all of Run Malibu’s steps were excellent.

I signed up in May when I decided (pre Delta, post vaccine) that I wanted a celebratory race to mark the end of this crazy time we were living in. Malibu seemed like a good idea (although, to be honest, when doesn’t it?) because it looked likely to go forward and even if it didn’t but felt safe to travel, it was a weekend with a dear friend in California. When the Malibu Tri went off earlier this fall, I was feeling pretty optimistic. The race organizers communicated regularly with necessary updates and although this race looked different from other Malibu Halfs, I wouldn’t hesitate to recommend it to any runner.

The meetup with Debbie came to be last minute when we were talking in her comments about a hilly race and I’m so glad I thought to ask about Malibu. So fun to spot her at the store and have some time to chat before she got busy. Have I mentioned lately that the best thing about running is all the people it introduced me to? <3 you all.

The race was relatively small with 1,797 finishers in the Half and bib/shirt pickup took about 30 seconds apiece. The really cute tote (yay California plastic bag ban, boo my not taking a pic and it not being with me) had usual race coupons and other goodies, but by far my favorite was a full-size tube of Flexpower Warm and a single of the Soothe/CBD ones. I’m pretty sure I’ve tried every muscle cream on the planet, but sometimes it’s nice not to smell like an old man. Can you tell I’m not an icy hot person? 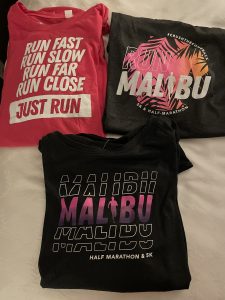 I wasn’t sure about the race shirt (top right) sizing because women’s shirts are always a crap shoot, and gee twist my arm to buy a super soft pink shirt. Bottom is a super light long sleeve with thumb holes. Life’s too short not to treat yourself. 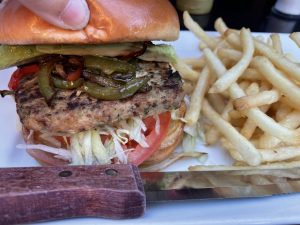 speaking of treating yourself 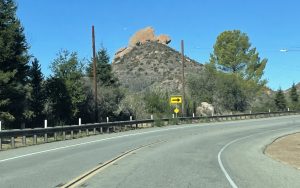 I really wanted avocado toast, which is my pre-Half tradition but forecast wasn’t good for that even in the land of avocados. The wait for the Malibu Pier Cafe was nuts so we headed back up to Agoura Hills and found Tavern 101 whose menu looked amazing and had outdoor dining. This turkey burger for an early dinner hit the spot. One challenge about this race: the race hotel was a good 20 minute drive through the canyons to the start. There are no other good options, Malibu doesn’t have the chains and is expensive, but just something to be aware of in race planning. The canyon manatees on Kanan Dume Road are a wonderful site when headed back inland. I’d flag that you need a car, but assume that’s a given with any California race. The turkey burger hit the spot, and we were quickly on our way to Fleet Feet and Target for some forgotten items. 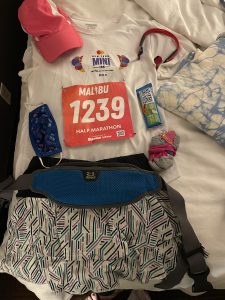 Flat Cari was ready to go

I ended up panic packing Friday due to a crazy week so was lucky I only forgot my belt, something that could be easily found. I’d say I forgot a long sleeve shirt, but when I looked at the weather I didn’t anticipate needing it. I forgot that deserts are cold over night! I had a long sleeve Zooma tee, but I like it and didn’t want to toss it, so hit Target for a cheap disposable shirt and some water. I picked the Amphipod Airflow Lite after exhaustive research… it was the only one Fleet Feet had. Spoiler: nothing new on race day worked so well that I think that’s my new primary with my old primary SPI belt now moving to Florida as a backup. 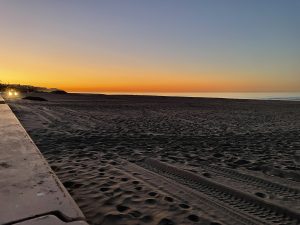 The race didn’t start at sunrise, but due to logistics, they advised early arrival and I was happy to follow suit since I’d much rather have time to chill then be rushed. Having scoped out the parking entrance the day before was super helpful as it was still full dark when we pulled into the Zuma Beach lots.  A spot facing the seawall was great for watching the world wake up. 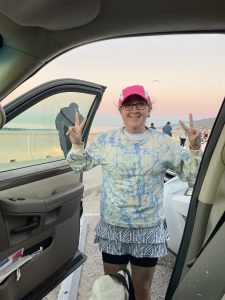 Ah yes, the aforementioned Target disposable clearance sweatshirt. I kind of liked it, actually. It was soon time to head to the start, about half a mile up the beach. Luckily the beach restrooms were open so there was no need to use the plentiful port o potties. 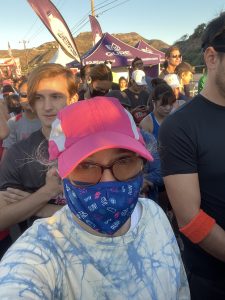 in control and ready to roll 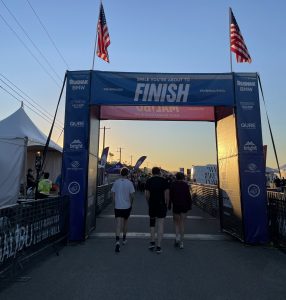 path to the corrals

I took my spot in wave three. Rather than standard corrals, the race was organized into three waves: under 2:00, 2:15 and 2:30+ finishes. I liked this personally, and it seemed to work well organizationally. Being a week after LA and NYC it was unlikely there were going to be elites in Malibu, plus the hilly course is decidedly not fast, although the top male and female finishers were done in 1:12/1:22 respectively. Masks were not required in the corrals, but I felt more comfortable in a relatively confined space. 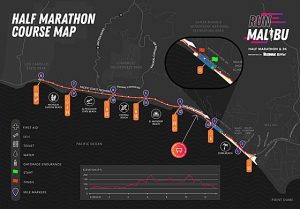 ready to eat hills for breakfast

I was worried about the hills, of course, but I listened in on a course strategy session at the expo and felt like I had a decent plan. 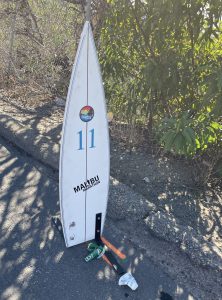 could there be better mile markers? 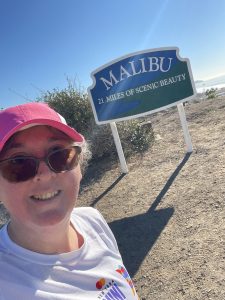 if there’s an iconic or a silly sign, I’m there for it

A few more course photos are here. The course was an intriguing one. We headed south from the start through the Zuma Beach parking lot before turning around to head back north at about a mile and a half. I say about as I missed the early mile markers until I realized I was supposed to be looking for surf boards! I spoke to the 2:45 pacer (per my goal) but had a good feeling that I wasn’t going to be running his pace. Shocker shocker, I went out too fast. I’m not mad about it — I pretty much expected that was going to happen with my first Half back.

The first hill was around mile 3.5 and at a second one near mile five, my IT band politely advised me that it did not approve of the hills. I made the decision at this point to power walk the hills, and I truly believe this made all the difference as far as post-race soreness and pace. 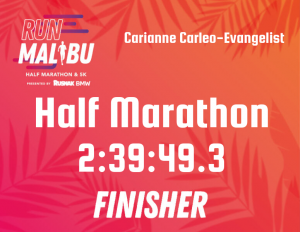 spoiler, I did not hit my goal. I blew it out of the water

I stopped for water, photos and to help a struggling runner who had no cell signal call for a marshal. First two were in my race plan, and while you hope there’s no need for the third, it’s just what you do. I wasn’t really looking at my watch that much since the scenery was stunning even when we weren’t looking right at the water, and you had to be aware of other runners since the race was in the southbound shoulder and right travel lane of PCH. Fun to have the road otherwise open and hear honks in support. It was a good course! Saw my watch around mile ten or eleven and realized my decision to not stay with the 2:45 pacer was the right one. I knew from the course strategy that the last mile was down hill, so I walked the last up hill and prepared to fly. Result? Second best Half time (by literally one one hundredth of a second over the NYC Half). Given the hills, I’m even more proud of this training and can’t wait to see what I can do on a different (read: flatter, cooler) course. 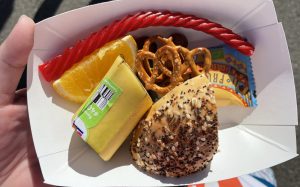 I haven’t received the download link yet, but the photos showed I nailed my other goal: finish smiling. I saw the photographers a few times and hammed it up. It was a very good day! Did I wish it was cooler? Most definitely, but with the knee plan to walk the hills, I’m not sure the heat changed my time much. I was so excited to have the orange slice and a fresh bottle of water at the finish as I poured the remainder of mine over my head to cool off. The baby pretzels were a nice touch too 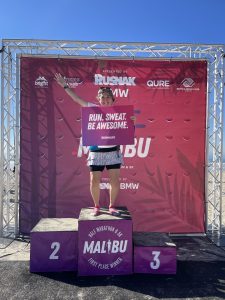 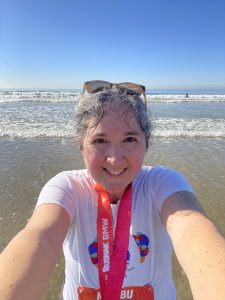 is there any better recovery walk?

After some finish line silliness and a quick goodbye to Debbie, I walked back to the car in the water. Who needs an ice bath when there’s the Pacific Ocean in November? 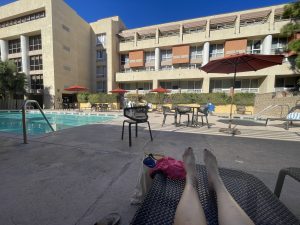 the other kind of recovery 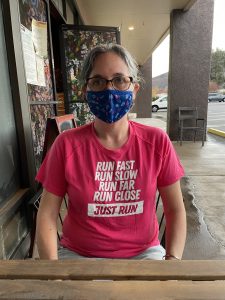 this shirt was perfect 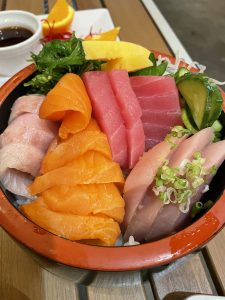 After some pool and jacuzzi time (truly what helped after Bermuda as well), we went for an early dinner at Sushi Raku, which hit the spot. Not pictured: amazing cucumber salad and miso soup.

I’m not planning to race in every state, but it was fun to add California to the list (NY, New Jersey, Florida, Washington D.C.). I would definitely recommend Malibu whether you’re looking to check California off your list, or if you just want a fun long weekend. I flew in Friday and out Monday. I think the only thing I’d change if I did this again – and I would like to – is fly in sooner so I had the chance to run and acclimate to the heat. I’m sure if I’d planned for that though it would have been more seasonable. The decision to fly home Monday and not take the red eye was a good one both for not needing to rush checkout or anything, but also not to be sore. Plus it gave us the chance for IHOP on Monday morning, which is always a good idea.

Still playing catch up after being away every weekend in November. So pardon any delay in replies, comments. I’ll be back soon!