are those two connected? If so, maybe there’s a PR in my January future.

The run down isn’t much of one as I took it easy this week to get my calves, hamstring to calm the fuck down. Mission mostly accomplished.  I’ll touch on it below but in the mean time linking up with Kim and Deborah to talk about Ted Corbitt and Robin Arzon’s #3for1 challenge.

Oh Ted Corbitt. The race that made me fall in love with the 15K/10M distance and running in the snow. Thanks to COVID and other cancellations, Ted is tied with the Women’s Mini and Frozen Penguin for the race I’ve done the most often at four times apiece. 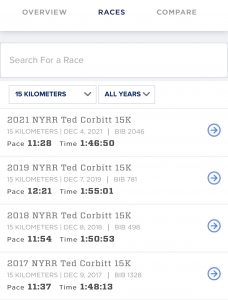 YUP that is indeed a PR!

What was that old jump rope song, First is the worst, second is the best, third is one with the treasure chest!? I’d add in a non-rhyming verse, fourth is the one with the per-son-al best!

I was not PR chasing today. And I mean truly not, not kind of but not thinking about it, or otherwise. I did not even look up my times on Friday night since I knew I was not in PR shape. I just decided to have fun and run, with walks if needed for cranky legs.

I ran to the start and got there at the most poignant moment: a moment of silence for Ahmaud Arbery. This was the first in-person Ted Corbitt since Arbery was murdered and, I think, the first NYRR race since the verdict. To honor his life along with the work of Ted Corbitt was a perfect pairing. 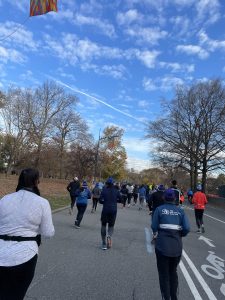 There were 4,071 finishers so it took a good ten minutes to clear the start area. This could have been problematic with a 66th St. start (same as 2019) and the lead runners coming back around and crashing into us. Luckily I didn’t get lapped until nearly mile two.  Never thought of Ted as a destination race, but it really does draw some international racers. Winner finished in 44:25! and nearly three minutes ahead of second place. WOW.

The route was up the east side, across 102 and down to the bottom of the Park before coming back up the east side, crossing 102 and finishing on the 72nd Street transverse. It meant we didn’t go pass the marker delineating the Central Park loop in honor of Ted Corbitt, but I’m not sad not to have had to run Harlem Hills. 2x Cat and the West Side Rollers/Sisters was plenty. 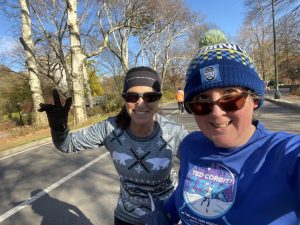 who is silly? We are!

I had a friend working as a course marshal at 90th Street and Elizabeth was at 72nd to join me for a few miles since the course wasn’t closed. I have to say, that’s a change I’m really enjoying as it keeps the park accessible to all users, which it should be. Funnily enough, this hat/sunglasses look made me accidentally incognito as a Strava friend thought he was serving me water at one of the water stations but wasn’t positive. Nice to have those bits of normal again and friends on a course that isn’t typically one with spectators. 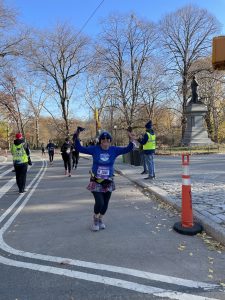 The whole race felt good, but 4-9 went so fast having a friend to chat with and distract me from a slightly annoying calf and stitch that developed out of nowhere. I looked at my watch just shy of nine miles and thought it was off. There was no way I was averaging 11:17. Elizabeth confirmed her watch said same, and that she was pushing me a little. It never felt an uncomfortable pace, but I likely would have slowed more on the second time through the Sisters. I walked the water stations as I always do – especially in December no need to water myself.

Just before the finish, Elizabeth ducked out so as not to cross and meet someone she knew working the race and… as a surprise to get this photo of me. As you can tell, not one bit of fun 😀

As I headed east -no way was I running home after I stopped – I looked up my prior Ted results and realized that if my unofficial time held, it would be a PR. I was thrilled and absolutely surprised to see that.  Cannot remember my last PR, maybe Grete in 2018? There is no question that taking this week very low key and the strength training from Peloton has paid off. Absolutely perfect 40 degrees with no wind helps too. Definitely the most mild of Teds. No layer under that 2017 Ted shirt, and was carrying my gloves by mile three or so. Glad to have had them though as the walk home was chilly!

Celebrated over sushi, as you do.

What was that about a January PR? Well more like February or April as I don’t think I’ll run Fred, but it’s Fred and that could very well change. While I don’t think it’s only Peloton, I know strength training has been a huge part of staying injury free too and want to keep that going into 2022.

Starting 2022 early/closing 2021 strong by doing Robin Arzon’s #3for31 challenge. Three miles or thirty minutes of movement every day. Hugely helpful on crazy days where I can barely get away from my desk (hi, hamstrings!) and end up with 155 steps on the day. Glad to have the movement time option as I am definitely not a streaker.

Have a decision to make on the gym front: Blink has ended the membership freeze and will begin billing again in January. I get this decision from their end, but I don’t think I’m ready. Would I like more weights and somewhere for cross training? Of course. Am I ready in January when it’s busy anyway with New Years resolutions? No thanks. Curious to hear whether they offer a paid freeze or I’ll just cancel. Blink’s staff is generally good, so not worried about that. Just not sure when/if I’ll ever want to go back. These two years have taught me I’m definitely not a fair weather runner, although I’ll never be a fan of peak summer running. 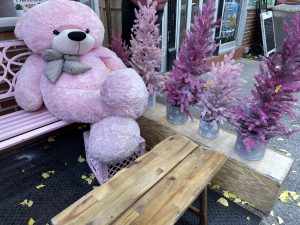 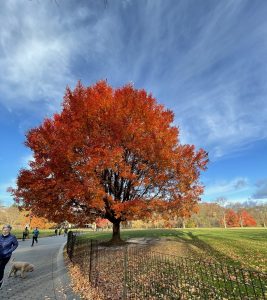 13 thoughts on “PRs and Peloton challenges”