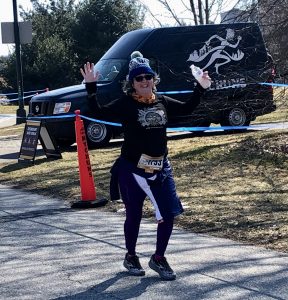 as you can tell, I had absolutely no fun at all and did not remotely hit my goal of finishing smiling 😉

This was fun, but can someone lop off a few of the hills in the Park? Linking up with Kim and Zenaida to discuss the February 2022, NYC Runs’ Central Park Half Marathon and my two remaining spring races.

I feel like this might be the first race recap where I don’t have to caveat it with but covid, so this may all be moot. Yay. Vaccine check was done before bibs were mailed, but other than that it was a relatively normal race. It helped that it’s a tiny race and I’m very curious what other, larger ones will look like

For as much as I love the half distance and run in Central Park all the time, I’ve only done two halfs in the Park: Lebow 2018 and 2019. This was also my first NYC Runs Half Marathon as they do relatively few of those. Plus I got to do a race with Darlene, which hasn’t happened since the marathon. We were spoiled that year with three of the same races: NYC Half, Albany Mohawk. We also ran Brooklyn in 2018 but hadn’t yet met. 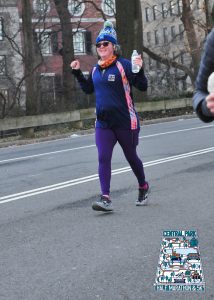 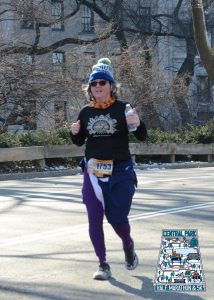 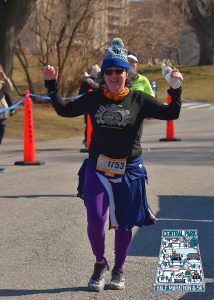 the end is in sight!

I won’t lie, I was thrilled to be done

I mean all of it really, but especially NYC Runs’ awesome free race photos. I love NYC Runs races. ~1,250 finishers is just fine and not every race needs to be a cast of thousands. There’s room for both kinds of races. I’d be lying if I said I hadn’t been worried about possibly finishing last, but I didn’t. 53 people behind me! I’ve finished last before, I personally do not care but hate to think volunteers and race staff are out there for pokey me.

The logistics for this race for anyone considering it or the Cocoa Classic Half, which is the same route, are good. Race Central with bag check, shirt/bib pickup is 102nd, a quick walk to the start at W. 96th Street. My one quibble with NYC Runs remains – I wish they’d mail shirts as well as bibs, but that wasn’t an issue as I was checking a bag for the brunch walk after. Plentiful water and gatorade, and hot cocoa at the end.

My time: 02:43:37.  Hair slower than both Lebows, faster than all but Brooklyn, NYC Half and Malibu per my unofficial tracker, since I can’t get into Athlinks. While I was happy with the race overall, I’m beyond thrilled with that given the training cycle and Central Park’s hills. I didn’t have a goal time, just wanted to finish under 3 which was my this was probably not a good idea Bermuda time (which turns out was 2:57). I was so far ahead of “schedule”, I caught Darlene by surprise at the finish. As NYC Runs says, “Win Your Race” and I did. I finished, I was literally singing as I crossed the finish and I came out of it with only the expected aches and pains from running a hilly AF half.

Speaking of training cycle, let’s look at the long runs since the beginning of the year:

Anyone spot the problem? As Darlene just said, “Do Those Long Runs“, but again, I knew this going in. My go/no go was whether I could finish the race without injuring myself. I knew I could and did. Don’t let perfection be the enemy of the good, always in running, but especially the last two years. I’d have deferred if I felt I was at risk of injury, but as I learned from Frozen Penguin (cancelled for snow & ice last year, construction this year!) there’s no guarantee with deferrals either. This race was actually the make good from the Frozen Penguin cancellation. January/February Halfs are hard weather wise, and there’s no guarantee I won’t ease up this December either, so time to just get the race done. 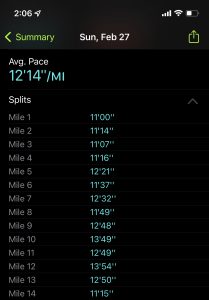 NYC Runs doesn’t have a tracker or splits, so the time doesn’t map exactly but it’s close enough. If you’d asked what I was trained for, I would have said 15K/10 miles. And shocker, shocker, I had a strong eight miles. My “race plan” was to run until the first Harlem Hill, where I was allowed to walk and then run until Cat Hill. After the second Harlem Hill, I was walking more than I anticipated. I expected the hills to be a challenge, but not that I’d run out of gas on the flats. But looking back at my long runs, it makes sense.

The main reason I don’t feel disappointed v. Malibu? Malibu’s altitude gain: 374 FT. Central Park?
720 FT (Apple Watch) and 471/591 (Strava). Not sure whether either is entirely accurate, but the point remains that Central Park’s hills are a beast. As Darlene said, it should be pace per hill, not pace per mile.

The wrap around jacket was shades of the NYC Half. I brought it with the intention of it being disposable as I knew it would get warm. Like the NYC Half, I took the jacket off, but was so afraid I’d need it later (despite bag check with a parka!), I didn’t want to toss it.

The annoying?
While this course is better than Lebow’s three Harlem Hills, I don’t love it. I would much rather two long loops, than 2 3/4 short loops. Unless I can train properly, I think this is my last Central Park half, the hills are not something to tackle undertrained. I also do not love loops. It’s a mental challenge. I won’t say never, Fred usually taunts me, but I’m not eager to do another without a good reason. This is probably a part of why I’ve never had an interest in SHAPE, despite the frequently purple shirts.

As I mentioned when I did Firecracker for July 4th, I really love small NYC Runs races. So what are my next two? The large Cherry Blossom 10M and the 25,000! runner NYC Runs Brooklyn Half. I have no goals for Cherry Blossom since I know the blossoms will be a distraction-to say the least! I’m formulating some goals for Brooklyn now that they’ve finalized the course and I can plan. I actually have no races on the calendar for the rest of the year, although I know I’ll do NYRR Pride Run.

Still want to do a destination race in the fall and thinking about Amelia Island and Portland.  I’m so hopeful that we can make travel plans again.