Original intro, and then this post got delayed three weeks: no point in a weekly run down since I barely ran in Alaska. Nothing wrong, conscious decision to focus on hiking on top of half marathon recovery. Working on a recap of the trip, which will cover what little but gorgeous running happened.

*tap* *tap* is this thing on? Linking up with Deborah and Kim to talk about the Juneau Half since I’m back to my regular-ish running routine after Half recovery, but with not much exciting to say. Not only do I not have another Half on my calendar (yet), I don’t even have a fall race. I’ve enjoyed the lack of have to and running what/when I want. One of my Stowe runs was absolutely gorgeous though.

The Juneau Half Marathon was the impetus for my Alaska trip. I was looking for a fall Half on one of the Half Marathon index sites and saw Juneau at the end of July and I knew I could finish thirteen miles without injury, so I decided to pull the trigger. Alaska in July is kind of like fall on the East Coast, right? I don’t have a goal or even particularly an interest of racing in every state, but after a three year COVID stall after hitting Alabama as state 39, Alaska was state 40 and 50 before 50 is alive and well. Hoping to have Alaska recap done for Tuesday but we’ll see.

I didn’t intend to be a secret squirrel while training, but it kind of happened that way.  Mostly because jumping into a half marathon with a month’s notice is silly at best. But I meant what I said when listening to Ali on the Run / Shalane Flanagan: “Stay fit enough to keep having fun and say yes to stuff” is possibly the best mantra. Also, if we’ve learned nothing in the last two years, it’s take the trip! I had a decent base and got in a couple of 9ish mile runs. It’s by no means a good training block, but it was what was available to me and I’m so glad I decided to do it. Juneau was my first true racecation since the other destination runs were long weekends. 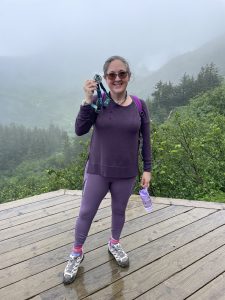 Spoiler, I finished and felt good enough to hike after

There wasn’t a ton of information online about this race, so providing a mix of what I think would be helpful to future runners as well as my experience. No good/bad elements as I had a blast and wouldn’t hesitate to recommend this race to anyone. 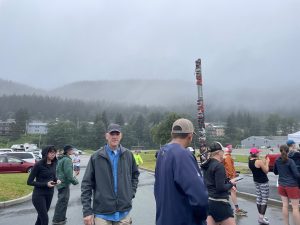 gathering toward the start 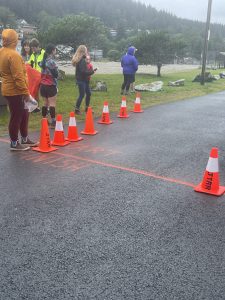 I have done some small for NYC races (1,250 in February‘s Central Park Half), but I’ve never before run a truly small race. 154 finishers between the Full and the Half, 103 in the Half. So this was really fun. Logistics wise, it’s also great for those flying in because not only do they have shirt/bib pick up morning of, but you could even register on site if you’re worried about flight delays or other travel/schedule issues. As we waited for the race to start, I was pleasantly surprised at the mix of locals, tourists. One woman who I spent time with was from an NYC suburb and completing a race in her fiftieth state and a man we spoke with had come up from Arizona for the race. I think an escape from summer heat is an appeal to many.

The race itself is on Douglas Island, just across the Gastineau Channel from Juneau via a bridge with the start/finish at Savikko Park, a few miles south of the bridge. Like much of Alaska and the Lower 48, the land has a complicated history, but I really was inspired by the story of the totem pole in the park as a step toward acknowledging what happened. And selfishly it made for an excellent landmark in the fog. While the Half didn’t start until 9 I wasn’t sure about the volume of Lyft/Uber and was still on East Coast time so I was up plenty early. I didn’t want to walk/run to the start (~ 4 miles from my hotel), but knew I could if necessary. The start area is also apparently served by local bus, but I didn’t know that until I’d arrived. If you have a rental car, there is plenty of free parking as well. I opted against a rental car since I knew much of Juneau was walkable and what I’d need transport for (airport, Mendenhall glacier, race) added up to less than 2.5 day rental.

I stayed at the Ramada, but the adjacent Sheraton Four Points is another good option. The bridge to Douglas Island is just north of historic, downtown Juneau where all the cruise ships come in, so accommodation for the race isn’t an issue.  While Lyft took a little longer than I’d anticipated, I arrived at the Park in plenty of time. The staging area with bib, shirt pickup was a pavilion so the mist wasn’t an issue. There were permanent toilets with a feature I didn’t expect: no stall doors. We’ve all gone to camp and walking backwards past an occupied stall > portopotty any day.

Fun fact: Juneau is a rainforest so it will almost certainly be a wet race. I somehow failed to take a flat Cari pic, but you can see my my skirt, tee shirt and windbreaker in the finish line pic below and they were perfect for ~ 60 degrees with light rain. I could have taken the jacket off mid race but it wasn’t too warm and didn’t want to deal with it around my waist, although I’ve done so. This 32 Below windbreaker that I bought on a whim for a cold, wet Lebow has been many a run saver in the last four years!

About ten minutes before the start, they asked us to walk from the pavillion to the start line a few hundred feet away. That meandering is the totem photo above. They marked our bibs to note we were in the start area, and were were off on time. With ~ 100 runners, there were no waves or corrals to worry about and there is definitely no tracking. 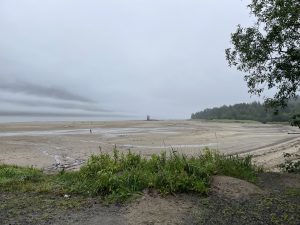 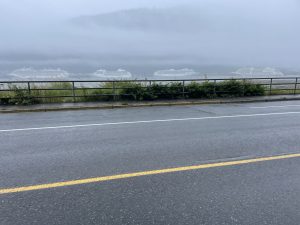 icebergs or cruise ships? That is (barely) Mt. Roberts in the background. 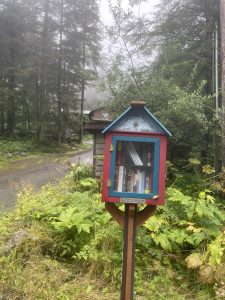 So would this be considered a book stop? 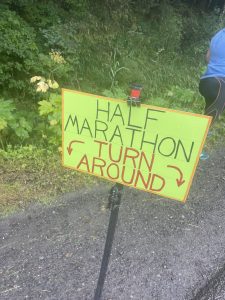 I won’t lie, I was happy to see this despite having fun. 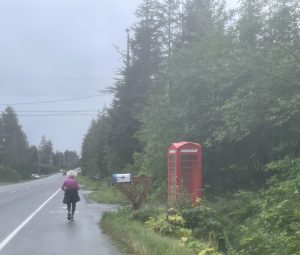 what country am I running in again? 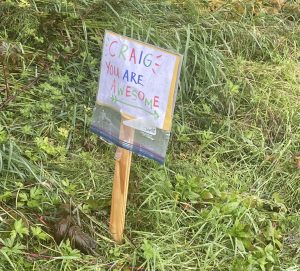 since I share three letters, I decided to call this my race name and pretend the signs were for me 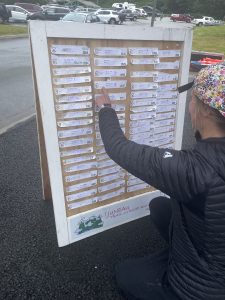 how to find your finishing time

This is the part where I am supposed to talk about mile splits? Have I ever in a race recap? Probably not and not going to start now. I could give you two reasons: my watch deciding it was done at mile 12 ish and my decision to hike a glacier the day before which meant I had no semblance of fresh legs, nor did I care. Glacier > race. But the reality? I didn’t care about my pace going into this race and I didn’t start to during it. This was never going to be a PR, and I wanted to enjoy running in Alaska. Check. Check. Check.

I ran for ~10-11 miles before my legs had enough and I walked much of the last two. Other stop and enjoy the moment pics above. I’m proud of myself that I didn’t take a Little Free Library book. Douglas Island is a residential community and they were definitely out to support us. Folks at the feet of their driveways, three water stops and generally a fun vibe. Shades of Bermuda to be honest with folks slightly bemused at us running up and down the shoulder. I loved the Craig sign above and other similar from the local running group for whom this race is a fundraiser.

I loved how absolutely low key it was. I actually forgot to take a picture of the Board once they taped up the bottom of my bib and didn’t actually know my time (2:43:07, smack in my range and 30 seconds faster than Central Park in February) until Darlene found it online and texted it to me. I guess that’s one PSA for Alaska overall: Verizon service is limited and WiFi is spotty. This was absolutely OK with me but doesn’t work for everyone. 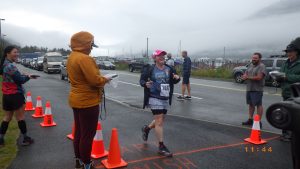 I missed hamming since I didn’t see the photographer 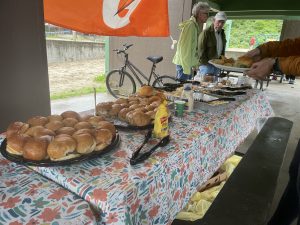 What’s a race without a silly photo?

Another upside of a small race is the organizer can provide catering. While I’m not typically hungry immediately post run, my metabolism was off with the travel, time change and it was either noon local or 4 eastern and the idea of food was a good one. It was also fun to watch the awards ceremony while chatting with other runners. We’d seen all or most of the marathoners finish as they started two hours earlier and both races are an out and back, so it was fun to recognize some of those who won/placed in their age groups.

While I don’t mind the big NYC runs mostly, I love the idea of doing more smaller runs. There’s a bigger race in Anchorage that I might do one year because I definitely want to go back to Alaska and the solstice would be amazing, but I’d wholeheartedly recommend this race to anyone looking for an Alaska option. The only hiccup besides the WiFi is the late start. In other cities it eats into your sightseeing time, but with Juneau having long daylight (although less so than Anchorage and further north), it’s not the issue it would be in other locations.

If my math is right, my next Half is my 13th. Guess I need to make it a good one!