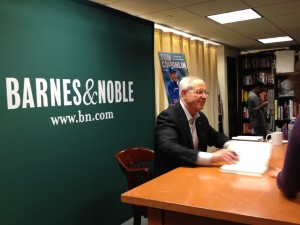 this blog has been mostly travel and weight loss journey with the occasional foray into sports. Today, is one of those forays because I just finished reading the best book I’ve read in a very long time. Tom Coughlin’s Earn the Right to Win.

I don’t tend to put athletes on pedestals because Here, There be Dragons or Tigers or whichever term for danger you prefer. It generally comes to no good end. Celebrities, athletes or otherwise, are just everyday people who live their lives in the spotlight. That’s no reason to look up to them unless they show themselves worthy of such attention. I was never sure whether I put coaches in the same category but since he came to the Giants in 2004, I knew there was something special about Tom Coughlin. This book just reinforced that.

If you’re a fan of the Giants or Jaguars, and or have read his previous book, A Team to Believe In, written following SB 42, some of the material isn’t new, but the story it told and the picture it painted about the man was. The story of the transformation in Coughlin’s relationship with Michael Strahan has been told a number of times, but not in this detail:

“Tom has since been recognized as one of the greatest coaches in NFL history, but at the beginning, our relationship was tough: I hated him. Hate is a strong word, but that’s the way I felt. … When I began adding it all up, I realized, You know what? Maybe I haven’t been seeing this guy the right way. Maybe there’s more to this guy than I originally believed… We were a family. And if anybody in our family needed help, the rest of us were right there to provide it, knowing that people would be there for us….When I look back on our relationship now, I tell people proudly that I love the man. I love him, and if I could, I would play for him any day. And together, we would win.”

And if it was only Michael, it might have been written off as a personality conflict, but there was Fred Taylor too:

“In 1998, at the beginning of my fourth season as head coach of the Jacksonville Jaguars, we drafted running back Fred Taylor in the first round…. We did have some conflicts. In fact, after I left Jacksonville I read several articles in which he said that he really believed I was trying to kill him during that year. In the ensuing years Fed and I had spoken a few times. I’d see him on the field when the Giants played his team, and we’d greeted each other politely. But we didn’t have a real conversation until after he retired in 2010, when I ran into Fed and his bother at the annual scouting combine in Indianapolis. I was walking through the lobby when I noticed a crowd of people and a little bit of a commotion. As I looked to see what was going on, Fed spotted me.Â  I stopped to say hello, and we started talking. Finally I got around to asking him about that comment. “I didn’t understand what you were trying to do then,” he said. “I understand it now. I have great respect for you”… We shook hands and they got into the elevator, but as the doors started closing, Fred said suddenly, “Thank you, I love you.” I love you? That was one thing that I wasn’t prepared to hear.”

People genuinely hated Tom Coughlin, and sometimes I wonder how he was able to get through a day. But somehow he turned the page — and I think it was more than the conversation with Charles Wray, the meetings with the NY media, the comments from his family. He decided to change — but I can still see him getting in a fight with a GPS.

It showed in his players too, Manning’s preparation and dedication throughout his rookie year and his career — from fear they were going to make a change and he’d no longer be the starting QB to not wanting to let down Coughlin. And eventually, it almost evolved into Coughlin not wanting to let Manning down:

“When you have hardworking, disciplined people like Eli Manning working for you, why would you ever yell at him, no matter how he has played? He’s ten times harder on himself than I’m ever going to be. “

As much as this book is about preparation and leadership, it’s about the undercurrent of family. Head coaches and GMs always pay lip service to hating to see a player leave the team — but I truly think it hurts Tom Coughlin to lose someone from his family. He has been there, even 11 years later, it’s clear how much his firing in Jacksonville still hurts him. He’s determined not to let that happen again to him — and wants to help his players through it if it has to happen to them. While he maintains that he doesn’t read the sports news, he was clearly aware of the media wanting him gone in 2011. and I can imagine how much it must have hurt him.

The other primary theme throughout the book is pride. Pride in your work, wanting to restore pride to the Giants’ organization, wanting to create the RIT & Jacksonville programs with pride. He practices what he preaches. He wanted the 2011 Giants to “finish” and be “all in”, he certainly wasn’t going to take time off after his hamstring was torn off the bone! He’s a taskmaster, but he won’t ask the players or coaches to do anything he won’t. He wants them to learn the way he learned.

The only thing I really didn’t care for in the book was the flow. It jumped around a lot — and maybe it wasn’t meant to be read cover to cover. Each of the chapters really could be freestanding lessons on one of his themes. And the best thing about this book? It doesn’t matter at all if you’re a Giants fan, a football fan, or you hate sports. The themes in here apply to all walks of life. I said to someone earlier today that I actually thought calling it a sports book was limiting and somewhat cheapening it. It’s much more than that.

And to think, the book was on my radar but I had no intention of moving it to the top of Mt. TBR (or reading it in two sittings!), but then I saw a tweet that Coughlin  was signing at Barnes & Noble and I decided that was a very good use of lunch. Bought two copies which he signed, and I decided I didn’t want to break the spine on my copy so I bought it for my Kindle and read it in two days.

Wow. I’ll be reading this again. And if you haven’t seen Tom Coughlin: A Football Life, find it and watch it. Another amazing look into the man.