aka another beautiful Sunday with the Lower East Side Jewish Conservancy on their Colonial New Amsterdam tour. Until they added some new public tours this spring, this was the last one I hadn’t done so I was pleased to see it offered in the spring as I generally don’t do tours in November and December. I think the seeds of this tour were planted in my brain at Shorakkopoch Rock during the Great Saunter and further while reading James and MIchelle Nevius’ Footprints in New York.

While blissfully shorter, today’s tour started at Fraunces Tavern whose 300th birthday is coming up sooner than I realized. For as many times as I’ve been to the Museum & eaten at the restaurant, I didn’t know that much about the building or its history. Even if the current building only dates to 1904, it’s still amazing history happened here. [[NB: I learned the year of the current building and a lot more on the Lovelace Tavern from this Forgotten NY Tour, whose only clue as to its age is the comment on the planned rebuild of the Staten Island Ferry terminals. So much has changed in this neighborhood since 2005!]]

From Fraunces Tavern we headed south (or “under water”, as I learned that Pearl St. was the shoreline and where it drew its name from. We passed the old Battery Maritime Building which is slated to be a hotel sometime soon. I wonder what will happen to the ferry service to Governors Island once that happens. From there it was on to Peter Minuit Plaza, whose history  I learned more about recently. Somehow I never noticed the topographic map that allows you to “walk” New Amsterdam with your fingers, nor the Jewish Tercentenary Monument at the flagpole’s base.

After looping around and through Stone Street, home to approximately four billion and twelve historic signs, we ended up nearly where we started, diagonally across from Fraunces Tavern. As many times as I’ve walked that block, I never noticed that I was walking on top of Lovelace Tavern and somehow never even saw the above-ground signs to the Stadt Huys’ history. In my defense though, the potholes are mostly condensed over and nowhere near as visible as in the Forgotten NY link above. There’s some more fun history here. 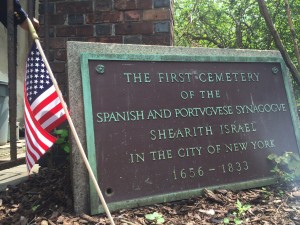 From there we headed north on Pearl and out of the Financial District/New Amsterdam to Shearith Israel’s first cemetery on St. James south of Chatham Square and practically in the heart of what is now Chinatown. It’s amazing how far outside “the city” that was when you walk uphill from Wall Street to the Brooklyn Bridge and then back down. Walking past the Seaport is just sad with the recent news and more-or-less permanent closure of the museum’s galleries. There are some great images and maps of the cemetery’s history and it was a pleasant surprise to find it open. It turned out it was for a Memorial Day dedication and so we got a nice bit of history about those who were buried there. The 2006 restoration was done with some amazing detail to find new pieces of history.

The guide said, and I agreed, that this tour was a hard one because with the exception of Shearith Israel’s cemetery, we were talking about things that there’s no trace of. It’s not like the other tours where the buildings’ purposes may have changed but they still remain. I found it amazing that there are only two manmade structures that date back to the 18th century: the fence at Bowling Green and (maybe) Fraunces Tavern.

The end of this tour segued nice with Eric Ferrara’s Bowery tour, which I did two or three years ago. I especially liked accidentally finding Collect Pond Park on my way to the West Side after the tour.