Not so much physical recovery-I was good there pretty quickly, but mental recovery. In short, I needed (and got) a vacation. More on that later. 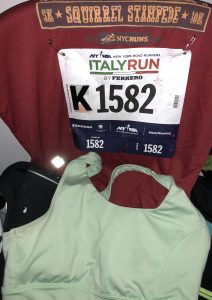 Red, White and Green for #ItalyRunNYC 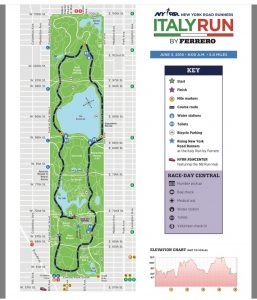 The route was substantially the same as the Retro and although I was worried about the hills, I thought Cat HIll between miles one and two would probably be OK and I could walk the rollers if need be/calves flared up. 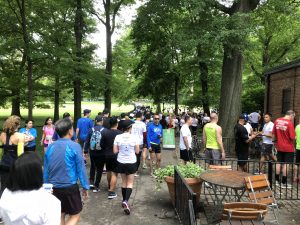 Queues by Le Pain restroom. People, much bigger one just to your right

As a final test of my legs, and because I thought I’d like to try it at least once I ran to the start. My legs felt good and I still had plenty of time to use the ladies’ room at Bethesda before. I stretched, but generally felt good. 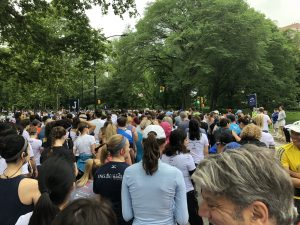 People people everywhere. 7,983 finishers per NYRR and it certainly felt big at the start. Not as many speakers in the corrals as in prior races, so we couldn’t hear much of the announcements, the anthem or why there was a delay in the start. I put that up to the race being on Italy time.

When we were finally off and running, I got frustrated. I don’t know if this was due to the size of J/K corral or being first spring race with decent weather, but I felt there was a general increase in a lack of consideration. If you’re going to walk/selfie right out of the gate, move to the side. Don’t run three across. I also saw way more course cutters than I have previously taken note of especially when we got to the reservoir.

The whole race felt good. I was pleasantly surprised at mile one and knew even if I lost time on mile 2 (hi, Cat Hill), I’d be good. Pleased to get right back to my mile one pace easily on mile three and five after hilly miles. I was especially happy since, with the warmup, this was ~6.5 miles. I’ve never maintained a sub 11 at that distance. 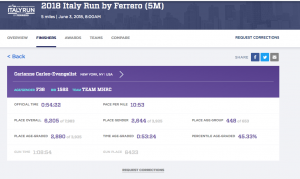 BAM! Three minute PR. I have no idea whatsoever where that came from, but I love it. Curious to see what it means for Saturday’s 10K, which goes in the opposite direction. Yay down Cat Hill. 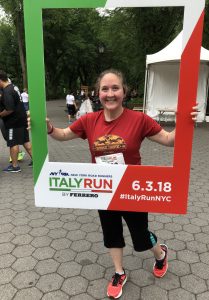 Shirt from the Squirrel Stampede came in handy to have something red. Another white race shirt. Ugh. 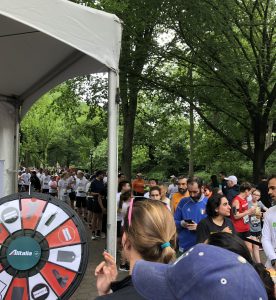 my time isn’t worth that line for Nutella

My legs were feeling good and I decided to run home, bringing me to about 8 miles on the day which felt good. I still remember at the 4M last spring a woman in the corral had run before and was planning to after and I couldn’t wrap my head around why you’d do more than the race called for. WHO AM I?!

(Linking Up with Wendy and HoHo)

Motto of this month: adapt to travel, but don’t let travel derail. Totals:

I’m really pleased with that. I didn’t run as much as I have in the past even with a Half Marathon, but I didn’t let business travel & vacation keep me from running. Steps wise, this topped May 2017, not a great month, even without the Saunter thanks to the Half and Monday’s 30K+ steps with a run & sightseeing.

I’ve dropped the average run time from my spreadsheets. It came about in a place where I was working to build my endurance and while I’m still doing that, an artificial 40m goal doesn’t help me achieve that. (I probably should have done away with it permanently last summer, to be honest). It wasn’t particularly accurate anyway as if I had a short run that I didn’t want to hurt my average, I’d just log the miles. So it’s gone.

Has been a while since I did one of these, so much travel, but feels good to have the weep mapped out