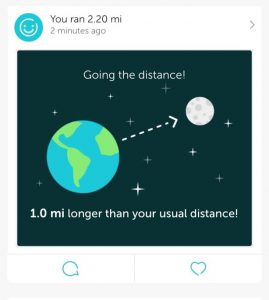 Not running, that’s still going strong. But for various reasons, Couch to 5K wasn’t working for me and it was frustrating me more and more. Quitting it actually started by accident. I was overseas and jet lagged and having issues converting the kilometers on the treadmill to the mileage I was used to. Feeling tired and with plane-induced cankles, I decided to go slower than my recent normal and realized I could go longer without much issue. In fact, I nearly doubled my previous, typical running duration.

As I got on the treadmill the next day I belatedly realized that in addition to running longer, I hadn’t needed to stop to stretch out feet cramps. Maybe there was something to this. I repeated the previous evening’s workout and added a minute to my running duration. I repeated the same the following night and would have the next except the treadmill was having issues and kept pausing.

After a day to fly home, I was back at the gym and Runkeeper’s C25K interface was yelling at me because I was 6 days late for my 5K. “Go away, gnat”, I thought, and ended that module. I’d been using Runkeeper’s more than the standard C25K app as I preferred the interface and thought it was closer to my own level, plus Runkeeper was what I’d been using the last few years for my workouts anyway. C25K was also at a speed that I knew wasn’t attainable for me when it hit workouts such as “Run .75 miles or eight minutes”. Nope, not going to happen.

So I turned off the app and just ran at an interval that worked for me, still using my LifeFitness treadmill’s 2 speed settings. I jogged for 10 minutes, walked for 2, jogged for 8, walked for 90 seconds and then jogged for 8.5 minutes. That felt really good, but I knew I could do more. Today, after a warmup walk to the gym since it was 60 in February!, I decided I was going to jog at least 12 minutes. As I neared that marker, I said “how about jogging a mile?” (yep, you can tell I’m not setting any land speed records here). And I did it. I really didn’t have a set plan for today’s workout, just knew I had about an hour. After a three minute walk I wondered, “Can I do it again?” . I thought I could, and I did. The second mile was definitely harder, but I did it. I finished my 33 minute/2.20 mile workout with 30m and 2.03 miles jogging. WOW. And yes, I got the sticker above.