So I think I’m back. But I runfess that there is almost no chance that I’m going to catch up. I’m trying though and if there’s a post you think I should see, please drop a link. In case you missed it, here’s where I was the last week.

Since I booked this conference and add-on road trip, I was wondering about how to accommodate training. This was more or less the same issue as last year when I had the Brooklyn Half on the heels of this conference. On the plus side, I thought it would mean the chance to run in three more states (hotels in Louisiana, Mississippi and Tennessee). Prior to the trip I’d raced in three (NY, NJ, FL) and run in seven  (CA, FL, NY, NJ, SD, VT, WY). After all said and done, I ran in Louisiana and Mississippi as the Tennessee hotel had no gym. So new total is nine states run in. 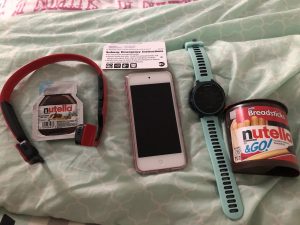 no flat me, but all the things because this post has too many words and not enough photos

Before I get into a massive Run Down, a little on today’s #ItalyRunNYC. I was nervous going in. My first race since my minor scare and my first remotely long run into two weeks. I knew last year’s time wasn’t remotely in the cards, but I didn’t have a proper plan. Or any plan really.

I also was bummed not to have my red shirt here. My Skirt Sports Redemption shorties in Holiday print under the race belt skirt was festive – and clean. Three weeks of laundry still in a bag meant my options were limited.

I’d arranged to meet a New York Skirt Sister and as we chatted in the corrals she mentioned she was going to run walk as she does Galloway and I was welcome to join her, but to not feel bad if it was too slow. I found I really enjoyed her company and conversation and planned to stick with her.

It was the perfect decision. Although it was in the mid 60s, it was 85% humidity so this wasn’t going to be a fast race. I was erring on the side of caution anyway and the walk intervals made it all work out. I’m not sure it’s something I want to do long term as I think paying attention to my watch would be one more thing to stress me out, but it was easy to follow at someone else’s direction. And fun to run with someone in a race. My achilles chirped briefly toward the end but went mute after a good stretch. A week of less than stellar compliance with PT caught up with me, but I’ve spent this week trying to be 110%.

I was also pleased that they had the sprinklers on as it was very warm in the sun. Plus, who doesn’t like to run through them? If you ever find yourself asking who doesn’t like Nutella? That would be me. I caught up with another friend at the end and then walked home. All in all, a good day

Massive Run Down catch up with Deborah and Kim:

Week of 5.13: Rain Rain. Go Away. Oh and this Gothamist post on MetroCard math made me laugh given the number of times I’ve weighed the literal cost of laziness

Week of 5.20: meetings and driving. New Orleans actually featured a lot of walking. Alas it and the subsequent road trip was all treadmill and elliptical as the weather & road trip hotel locations were not conducive to outdoor running. 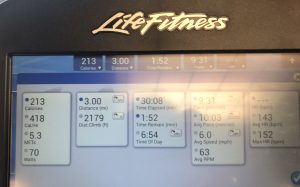 Week of 5.27: re-entry is hard. This was a really interesting read as I was getting up early, but the workouts still weren’t happening.

Plan for the Week: this is going to be a tough one.

It was shaping up to be a better running month, but then life happened. Slowly getting back on track.

27 thoughts on “Running and travel”