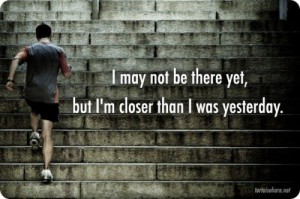 I may not be there yet, but I’m closer than I was yesterday.

Via LifeWithFitness.
when I was rebuilding the blog, I stopped to read my early thoughts on accountability, which I revisited in April. I said I was going to get the rest of the way to goal this year, and while that isn’t going to happen, the above summarizes my feelings on my progress this year.

I’m not there, but I’m getting there.

Let’s see where I am with regard to the baby steps I’ve set.

I definitely did better with my January goals then April. I think it’s because I referred back to that first post more often. I actually forgot about the April mini goals I set although I knew I had revisited my progress on January goals. Time to set some new ones for the home stretch of the year.