as I’ve touched on before, the Great Saunter was the idea behind the #GreatManhattanLoop when I first started walking Manhattan. Due to a combination of not being in town on that Saturday and knowing I wasn’t up to that distance, I walked the Loop in segments before finally finishing in May 2013.

In May 2015, the stars finally coincided for me to attempt the Great Saunter. I didn’t finish it (and apparently most don’t), but I (mostly) enjoyed the 19.5 mile walk around Manhattan’s shoreline including some places I knew of but had never gotten to photograph, like Pumpkin House. 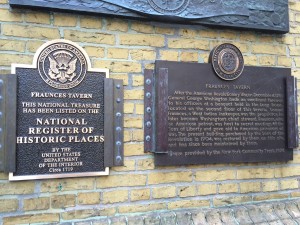 Historical markers on the Broad St. side of Fraunces Tavern

Saturday, May 2, came bright and early-especially early with registration beginning at Fraunces Tavern at 7am. As I learned later from a Shorewalkers volunteer, there were 1,070 folks preregistered and they expected that 3-400 had joined at various points along the route. 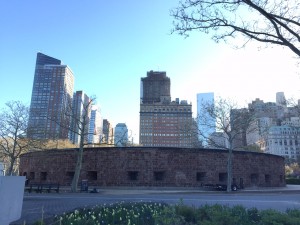 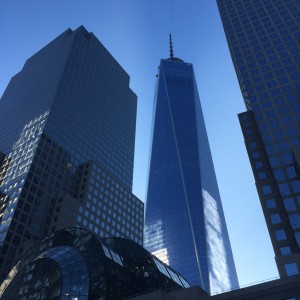 One World Trade behind the Winter Garden

The first miles of the walk go around the southern tip of Manhattan through Battery Park and up the west side through North and South Coves and Battery Park City. I’m pleasantly surprised with how relatively construction-free Battery Park is and it looks like the SeaGlass carousel might finally become reality. I enjoyed the quick view of Castle Clinton aka South West Battery in this National Parks’ Centennial year. Amazing to think that was once in the harbor. The opening of One World Trade last fall for office space and the Observatory later this month is amazing. I also can’t believe this was less than three years ago but that site will never not be arresting. 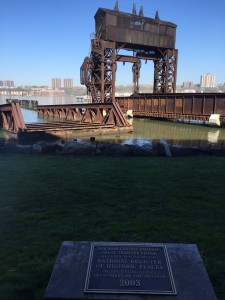 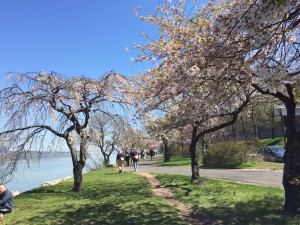 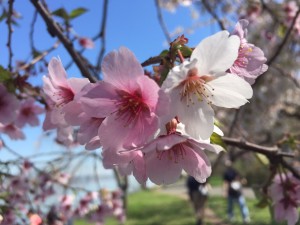 White and pink cherry blossoms on the same limb

I didn’t take many photos along the early part of the route in part due to wanting to keep pace and, in part, because I had many from my May 2012 walk. The only exceptions were the New Whitney and the fairly new North River Lobster Company. Alas, it was too early in the day for lobster and we walked on through Riverside Park which is the stretch of the Greenway I feel as if I know the best. I walked it in February and two weeks ago in a premature attempt to see cherry blossoms. The no photo thing-which I knew I’d need to keep up if I wanted to keep up with the group-died as per usual when I saw cherry blossoms. Aka why there’s a whole Flickr album dedicated to them. Plus the whole stretch from W. 89th up to the George Washington Bridge is gorgeous in all seasons.

Alas, it was at this point when I started to drag after maintaining pace for the first 11+ miles or so. At West Harlem Piers Park, I changed my socks and repacked my bag* in an attempt to keep my water bottles from stabbing me. I slugged past Riverbank and into Fort Washington. I was already dreading the walk up from the Lighthouse, even though it’s one of my favorite spots in the city. 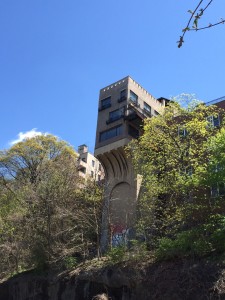 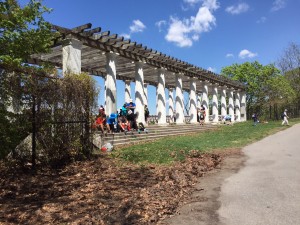 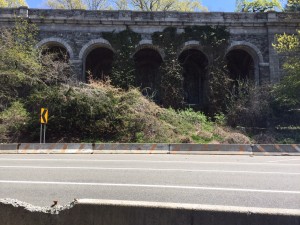 I limped through this stretch of Fort Washington despite being eager to see the Pumpkin House and Fort Tryon Arches now that I knew what they were and normally loving Castle Village and being fascinated by Inspiration Point. In short, I still didn’t get the appreciation feeling I was after back in 2013. I thought the end was in sight when the greenway ended, however I didn’t know the route that the Saunter would take through Inwood as the Greenway is a bit of a myth at this point. It was a slog, and by this point I mostly decided I was done. 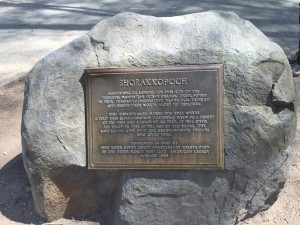 On the final limp to the flagpole and lunch break at the 16 mile mark, I finally found Shorakkopoch Roch (full name & details). The whole story is little more than a fanciful myth, but it’s a fun market to NYC’s history. While I broke for lunch-and to change to my flip flops-I gave some thought about how far I really wanted to go. Now that I knew I wasn’t going to finish, I wasn’t concerned about pace. 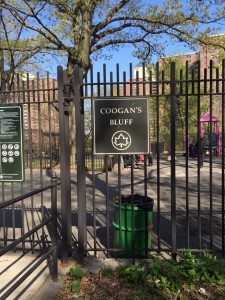 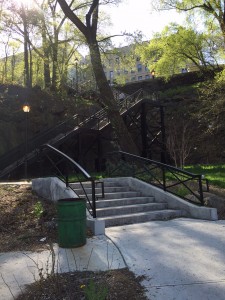 the John T. Brush Stairs up to Coogan’s Bluff

I won’t lie-as I left Inwood HILL Park at Isham the A train at 207th was tempting. But I’d made the decision to go as far as 155th for three reasons:

I had forgotten about the biggest upside – cherry trees! – which made the northern stretch of the Speedway gorgeous. Their soft soil a nice treat under my super sore feet. As I moved toward the southern end, I thought about something else that would be near 155th. The restored Polo Grounds Stairs had reopened in 2014 after years of talk and being “a mystery” as recently as 2010.

While walking along a portion of the Greenway that paralleled the “Harlem River Driveway” and trying to figure out whether Coogan’s Bluff was truly accessible, I turned to the right and there they were! I just had to figure out how to get there with a cement barrier in my way. This portion of the Greenway was either new since 2013 or a portion that I never found since it carried me above the street level of the Polo Grounds Houses.

I walked down to 155th and doubled back – only sports history could make me do this at this point – up Edgecombe and Coogan’s Bluff came into sight. Climbing up on the exposed rock was beyond me at this point but I sat at the top of the stairs before gingerly making my way down where i rested on a picnic bench and communed with the ghosts.

“This is the last piece of real evidence that the Polo Grounds existed, other than the plaque that indicates where the approximate location of home plate was,” said Gary Mintz, president of the New York Giants Preservation Society. … “This is historic ground and should be preserved and treasured any way possible. The Giants’ history in New York was tremendous and judging by the legions of fans today, the New York Giants and San Francisco Giants haven’t been forgotten in New York.” ~ Gary Mintz

It was the perfect place for my saunter to end – and end it did when I boarded the M2 Bus and headed south. I have no regrets. I stopped enjoying the walk somewhere between miles 14 and 16 and there is no shame in walking 18+. It’s always the west side that I’ve found prettiest and the city streets of the east side – which I know well – don’t appeal to me in the same way as the Greenway does. Maybe I’ll finish when they finish the Greenway. 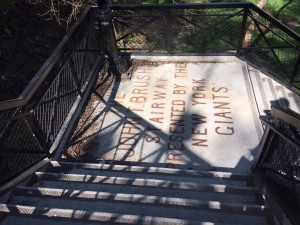 *I looked like quasimodo. I was in awe of all the slim line packs people were carrying. Some of mine was exacerbated by shedding my fleece at the start. I vow not to look like a turtle if I do this again. Eight sandwiches and a box of granola bars were six too many