Definitely light on the running this week as I recovered from my trip and slide. On other notes:

Weekly recap, with Holly and Wendy:

Uncharacteristically for me, I sat on the curb in the corral and didn’t stretch but instead tried to talk myself up. I was tired, hot, and did not want to run. A text from a friend hatched a plan for us both to walk it, but we couldn’t find one another in the corrals so I figured I’d just see how I felt before turning left on 72nd Street because I ultimately needed to head back south to get my bag.

What happened after my oh so wonderful staggered start? I went out way too quickly with a 10:00/10:08 first mile. Even downhill/rolling that was ridiculous for the humidity and I paid for it in mile two, which had Cat Hill and a water stop. I sort of picked it back up in mile three, but not really. Strava says 36.06 and 3.28 for 10:58, NYRR says 36.06 for 3.1 (LOL!) for 11:37, RunKeeper says 36.06 and 3.29 for 10:59. It’s an NYRR 5K PR and a course PR. Do I care that it’s 3m off the Frozen Penguin? Not really. I went from not racing this to not running a smart race and it was what it was. Amusing that I was wearing my Run 4 the Warriors shirt as I felt somewhat the same as that race. Not great, but could have been worse if not for some self inflicted wounds. I had a popsicle at the end, enjoyed Central Park in twilight/dusk and headed to the office to freshen up before heading home to mom’s for a long weekend. 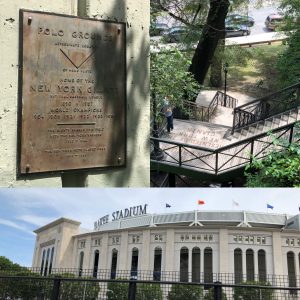 About halfway across, I remembered the baseball history idea and decided to hit Brush Staircase at the minimum. As I was navigating my way around construction on W. 155th and the Polo Grounds Towers to get up to the base of the stairs (“up” to the base, yes. Sea level to Coogan’s Bluff is 175 feet!) I remembered there was supposedly a marker for the approximate location of the Polo Grounds’ home plate. Luckily my phone wasn’t totally dead so I made use of the PoloGrounds’ entry on Ballpark Chasers and the Historical Markers database and still proceeded to walk past it twice before figuring out what I thought was the route. The stairs gave me a brief respite between the second and final tries to decide whether I really wanted to pursue this. In the end, I decided to because I still needed to get home in some form.

When I walked out of the complex, I laughed because I realized it was almost exactly a straight line back from the 155th St. Station on the B/D line. Oh well, I got a lot of steps and baseball memories in the process. It was absolutely worth the time to find it. The Towers’ complex is relatively busy, but the top of the stairs is on a quiet, residential street and you can just sit there and listen to the ghosts. Such a magical piece of New York’s sports history! If you want some great photos of the old stadium, DeadBaseball has you covered.

This stretch from High Bridge Park to home is brutal and boring and my bag was getting heavy so I got the M2 bus home. Still debating whether I’m going for a run today, three hours after I sat down “just to charge my watch!”. Story of my life. At least my running clothes are on. Overall, a good if not great week. Feel recovered from the fall & think PF flare is gone.

I don’t have one, oops!  I thought my 7M run was Saturday, but it’s Sunday. I hope it’s cooler. I’m probably not ready as I’ve not done more than 5 miles since the end of June, but it is what it is.  Plan at the moment is to run either Sunday/Tuesday/Thursday/Friday/Sunday or Monday/Wednesday/Thursday/Sunday. Since it looks like this is going to be a gym week due to rain, I’m hoping to do the check out run to see how my July speed training went. August has a lot of travel and I think I need to focus on planning those runs vs. my haphazard summer schedule. Also, where did July go? We’ll see if today’s run happens and go from there. ETA: I ran. I PRed. More later this week

Linking up with Deb:

pretty much the same as last month, but I did add the New Balance 10 Miler so I get automatic registration for the NYC Half next year via the Four of Six program. I don’t love the Half course, but I had major FOMO this year when I cheered it, so decided to get the guaranteed entry and decide when registration opens if I want to do it. I think so. I have the Fort Lauderdale Half booked again for Feb 2019 but I’m torn on whether I’ll repeat Lebow or do Shape (same course) in April. Decisions, decisions.

26 thoughts on “Walking through MLB history and listening to my body, week of 7.23”