I’ve known since early March that I can’t run on a full stomach. Found that one out after trying to run after dinner one day. Nope. I generally do manage OK running after work with the latest snack about 4PM and a run around 6:30. I don’t tend to run more than about 2/2.5 miles in the evening though.

Yesterday’s #Run4Warriors was to be my first after work 5K. In fact it was to be my only race with food in my stomach. Between that and having had only two runs in the prior week due to vacation, I wasn’t optimistic, but didn’t want to bail on a good cause.

The day was gorgeous and the course was perfect. It was an out and back from Battery Park to Stuyvesant High School on the path I’d covered recently during the Saunter and the 9/11 5K. That’s where the similarities ended.

I was off to a bad start when I realized upon changing at the office that I’d forgotten my socks so after a Duane Reade run I was violating “nothing new on race day” though I knew that was a lesser evil than bare feet in sneakers. Speaking of starts, I went out too fast and wondered why I was winded early. Whoops, you don’t run a sub 10m.

The run itself wasn’t pretty. My feet were sliding in too small for my shoes socks and my left foot went numb, but I didn’t want to stop. I knew I was going to be very back of the pack and didn’t want to leave volunteers out there any longer than necessary, so I ran. My time wasn’t pretty. It was better than the Frozen Penguin, but not as good as the 9/11 5K even accounting for the latter’s 5K-ish.  I came away happy I finished, but unhappy with how I did. Like I wasn’t progressing, even though I was according to my spreadsheets.

After a lovely chat on Twitter with @Hope4TheWarriors and @RunTheEdge I felt better. We have Summer Fridays and I went for a run around 2, about four hours after I’d last eaten. And I ran my run, not worrying about finishing last or anything. And it felt good. It was my somewhat routine of:

I like this, it works for me. It grew somewhat out of the ASICS Pacing Academy which I stalled out on. I like longer time intervals vs. more frequent/shorter ones. Finding my pace has been a thing for a while. Even though I can do a 5K without stopping, I feel better with my walk breaks in there. No doubt climate control helped too. And then I went to look at my splits from yesterday to today. 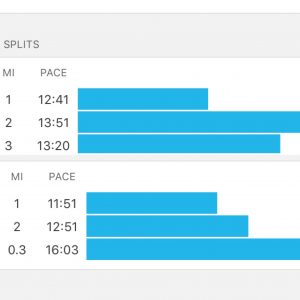 Um what? Mile 2, even with my .15 walk at the top of it was faster than two of my miles yesterday and just ten seconds off mile one yesterday? I get it, objectively, but it doesn’t make sense. I need to look back, but I think today’s first mile was my fastest since I only recently went from 12:45 to 12:30 as my base. Baby steps.

4 thoughts on “letdown run… or maybe not”