You know those runs that are just absolute perfection in every way? That happened on Wednesday.

This was an interesting week, running wise. The original plan earlier in June was to take this week off as I had a feeling I’d be slightly burned out from all of the June races. In some ways, being sick last week and taking it easy cleared that and come Tuesday I was antsy to run. Antsy in the sense that I was sitting in a meeting and wanted to be outside. The mid 70s, zero humidity weather certainly helped with that, and I was glad to feel restored.

I realized in June that I really liked training for something, which I’d been doing in some form since October of last year. I want to take advantage of this window with no double digit races on the calendar, although I might do a ten mile in September. One challenge I really enjoyed last year was Run the Year’s 4x5K challenge when during June you were meant to run a baseline 5K and then three more to see if you improved. I did! Since one of my goals is to eventually get to sub 30 5K, I decided July would be perfect for it since heat would very likely mean a lot of indoor treadmill runs. I don’t have a final 5K planned as checkout, although this NYRR 5K is a possibility. More on the “check in” race below.

Weekly Wrap with Wendy and Holly. 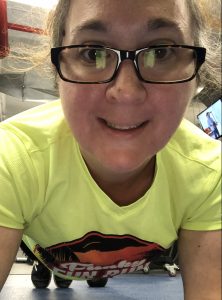 when Keelie asks for a squat selfie and the plank is feeling solid. Plankie! 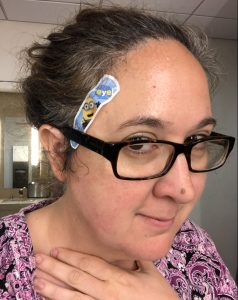 if you have to wear a bandaid on your face, might as well have fun on Summer Friday

I cannot believe we’re at the mid-year point of #GoTheDist/Run the Year. Where has 2018 gone?

Runfession, I saw the running mileage Saturday morning when I entered Friday’s run into my spreadsheet. I actually thought I was closer to 58. Why did I let it go? I’m having a (minor and hope to keep it that way) PF flare and decided it was going to be a rest day. Could I have gotten .18 miles without hurting? Probably. Would I have stopped at .18? Probably not. I also could have picked that up had I run home from one of the two races where I opted to walk. The PF said hello when I walked barefoot on the beach. I know better, but sometimes you just have to. I went to JackRabbit and got a new roller ball and will be better at my stretches. I also think I need to lay off the planks a bit as those don’t feel so good in the foot. Determined not to let this be a major flare and will ease into July as needed.

210 is just above what I need to hit my stretch Run the Year goal, so that’s perfect.

OK, that running one is way more annoying than 59.82. But as I predicted at the end of Q1 when I was slightly off pace, spring/summer would be better.

overall, I’m thrilled. I’m slightly off pace on the running, and 2,500 miles run/walked but I knew both to be stretch goals and they’re still in play. I’m 100% confident I’ll get 700 miles run on the year even though I won’t have the half marathon training I had in the first part of the year. This is insane compared with the midway point last year, and I really love the progress I’m making. 2018 goals are well in sight, although I switched to running mileage only for RTY so the team ones don’t quite make sense. Oh and a year into Amerithon, I’m in Missouri! I didn’t enjoy that as much as RTY, and I really dislike that RTY went to their tracker as I forever need to re-sync.

38 for the March – August window I was trying to get ahead this month while also catch up from May’s time away as I know I’ll be away in August.  I need 50 overall so should be in good shape. There’s been a lot of outdoor running followed by gym to stretch

I’ve read 61 books on the year and will likely finish 62 today, which would mark Book 5 in #20BooksOfSummer. Overall, 17 ahead of schedule. WOW. Maybe 100 will happen?

27 thoughts on “Training and Recovery, Week of 6.24 and #GoTheDist mid-year”