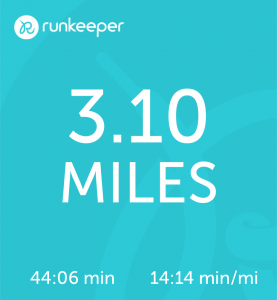 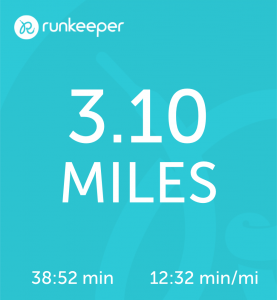 When I first ran in January (January 7, to be exact) it was .61 miles in 12:00 (19:40 pace, essentially walking) following Runkeeper’s version of the Couch to 5K. That was on a whim when I went to the gym and I had no sense of whether I’d stick with it. A few milestones over the subsequent months:

After last week’s post about the #4x5KChallenge and whether it was my second or third run, I decided I didn’t want to count the 5Ks that were within the Retro or the Mini 10K. Although I wasn’t properly following the challenge-supposed to be on the same route-I wanted to actually run 5Ks…. and because I never do anything halfway I ran three in the last five days. Still doing every other day off even though the hip  is much better. So here are my 4x5KChallenge times:

So in less than three months, I’ve taken 5:14 off my 5K time and ~1:46 off my pace. I feel as if those two are fair comparisons as they’re treadmills in the same gym. Probably even the same one.

More spectacularly for me, my post-work runs have gone from 20 minutes and 1.5 miles to 40m and 3 miles. I have the physical and mental stamina to do that. That’s amazing. It’s a harder sell on the treadmill, but I did it today and will continue to do so because I’m loving this.

Working toward a possible September goal. Not sure I”m ready to put it in writing yet. We’ll see.

One thought on “Couch to #4x5KChallenge”